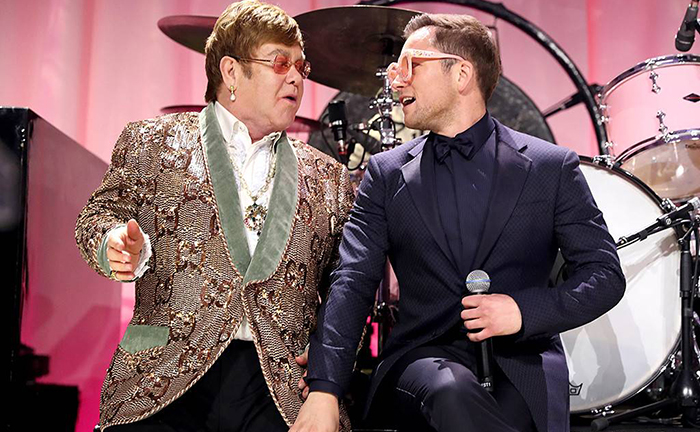 Rocketman, the upcoming Elton John biopic, will reportedly include a brand new song written exclusively for the film; a duet between Taron Egerton (who plays John in the film) and Watford’s crown prince of Rock n’ Roll himself.

The film’s newly revealed 22-song soundtrack, which is almost exclusively covers of classic Elton John songs by Egerton himself, ends with the new single (I’m Gonna) Love Me Again.

The song was written for the picture by Elton and his longtime collaborator Bernie Taupin (played in the film by Jamie Bell), and will be a duet between the singer-songwriter and the actor he handpicked to play himself. It will, presumably, play over the end credits.

The entire soundtrack was produced by frequent maestro Giles Martin, and doesn’t use any of the original backing tracks from the covered songs – instead featuring wholly new interpretations in order to fully complement Egerton’s vocals.

“It was so important that the music I composed and recorded had to be sung by Taron,” John said in a statement. “I left Taron in the hands of Giles Martin, who I trusted implicitly because he’s brilliant. I didn’t want to be in Taron’s shadows, watching over the process, I trusted them to do what they needed to do, artistically, and listening back I’ve been astonished with the results.”

As a fresh composition, (I’m Gonna) Love Me Again will of course be eligible for a Best Original Song nomination at next year’s Academy Awards.

Rocketman is set for release in UK cinemas on the 24th of May, and will also debut at Cannes on the same day.