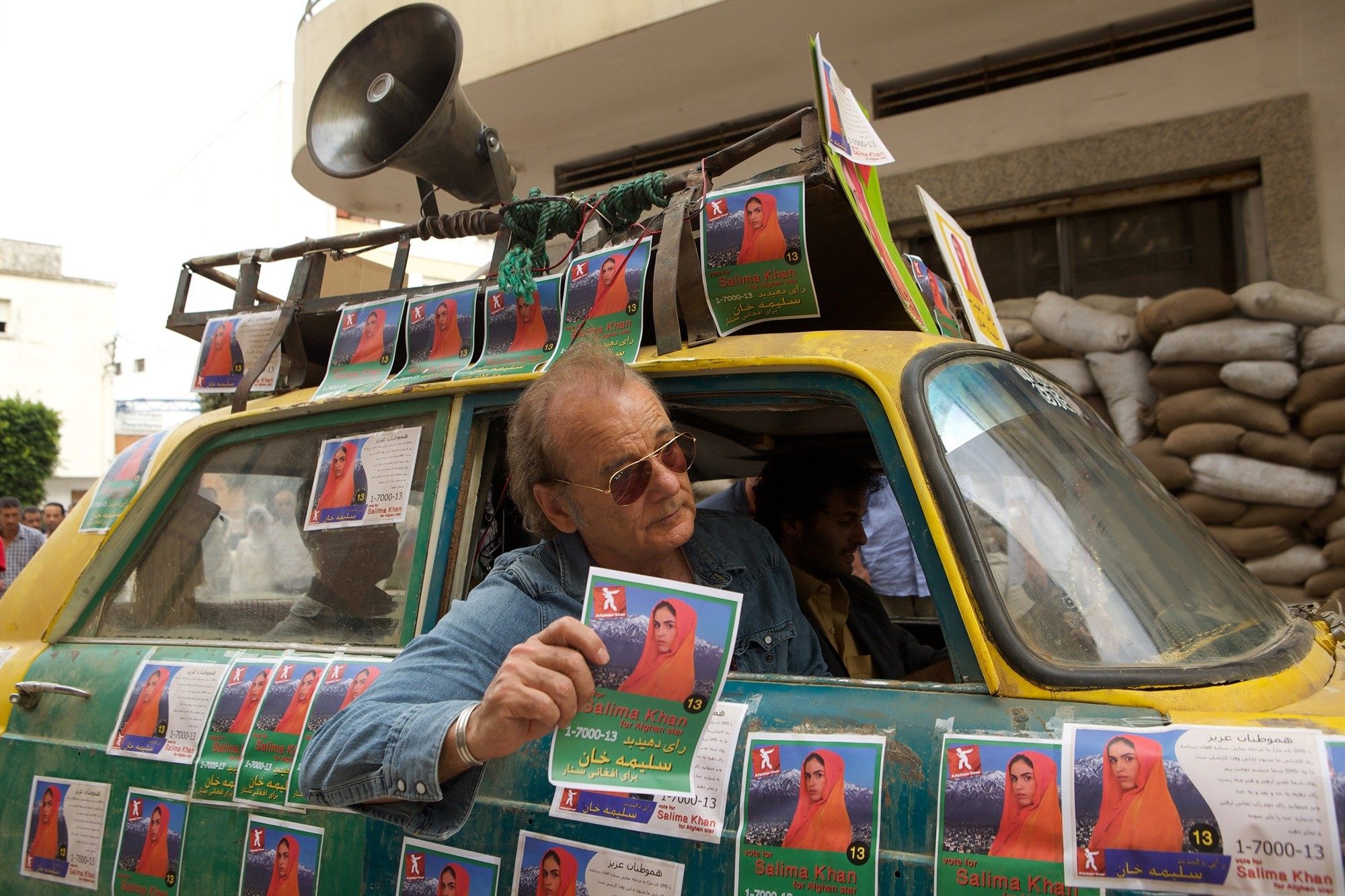 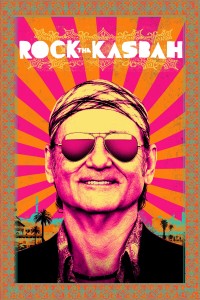 Rock the Kasbah is a film that is neither here nor there. It is an odd case of feeling completely inconsequential while using relevant aspects of our current cultural climate to try and make a statement yet only proving itself irrelevant for it. It’s a strange film-an experience that isn’t exactly unpleasant while you’re in the midst of it, but is ultimately more forgettable than anything I’ve seen at the movies in recent memory. It’s is a shame, really, as the production has so much going for it and could have certainly been an interesting film were someone with any kind of motivation or vision in the director’s chair. It’s always fun to see Bill Murray’s name above the title, leading a film and especially if that film is a broad comedy (something we don’t get often anymore), but while Murray is seemingly giving this his all director Barry Levinson (Rain Man, Good Morning Vietnam) looks to be on autopilot. This isn’t necessarily unexpected as Levinson hasn’t produced anything that’s been universally loved or appreciated for some time, but to have frequent Murray collaborator Mitch Glazer (Scrooged, the upcoming A Very Murray Christmas) behind the screenplay and Murray front and center with an off the wall premise one would think there’d be more to this tale of a washed up music manager who ends up stranded in Afghanistan. Instead, Murray and a rather outstanding supporting cast that includes Bruce Willis, Kate Hudson, Zooey Deschanel, Scott Caan and Danny McBride are wasted in this meandering mess that only stays afloat for the pure intrigue of seeing where the movie might go. Turns out, Rock the Kasbah isn’t worth paying much attention to even if every facet it offers up is one you would normally give enough credit to do as much. It’s not horrible by any means, but it’s easy to see the amount of untapped potential here that inevitably makes the final product all the more disappointing.

Glazer based his screenplay around a 2009 documentary called Afghan Star that essentially followed a season of what is Afghanistan’s version of American Idol. That season just so happened to feature two women in the final four whose presence on the show alone brought them death threats. In Glazer’s fictionalized take on this documentary (that I haven’t seen, but clearly offers an interesting insight to a culture most of the world is not familiar with) Murray plays Richie Lanz who is a has-been rock manager. Lanz, after consulting with his daughter that doesn’t matter in terms of story, takes his only viable client who also happens to serve as his receptionist, Ronnie (Deschanel), to Afghanistan for a USO tour. Upon arrival Ronnie freaks out, takes Lanz’s money, passport and hitches a ride with a professional soldier, Bombay Brian (Willis), whose services she can’t afford thus putting Brian on Ritchie’s trail. As this leaves Lanz more or less stranded in hostile territory he quickly makes friends with two opportunistic war profiteers (Danny McBride and Scott Caan) that enlist the desperate American to transport weapons to a Pashtun village. During this venture Lanz comes across a Pashtun woman, Salima (Leem Lubany), with an admittedly incredible voice whom he immediately tries to book on Afghan Star in hopes of getting her the recognition she deserves. The oddest part about this already odd film is that Murray’s character, a seemingly competent, mature adult with plenty of perspective doesn’t seem to comprehend either the danger or the weight of the situations he’s asking Salima to be a part of or even the danger he’s placing himself in. Oh, and for some reason Kate Hudson shows up as the prostitute with a heart of gold to help navigate Lanz through this mess he’s entangled himself in.

The main attraction here is clearly the cast as it was always going to take the charm of the ensemble to convince audiences this story was a good idea or at least one worth being mildly interested in. Murray has become such an American icon of sorts one would think a large portion of the population would flock to the rare film he headlines just to get a better glimpse at the man who keeps his persona a guarded one. With Kasbah, Murray is giving his most outright comedic performance in a leading role in some time (its been nearly twenty years since The Man who Knew Too Little and over a decade since The Life Aquatic if you’d even classify that as pure, broad comedy) and yet it is so sporadic and weightless in his portrayal of such a sad sack that it effectively means nothing. In a sense, Murray is recreating any number of his iconic characters from the eighties and having them age as gracelessly as possible through Lanz. The problem is that as opposed to many of those characters that made Murray a household name and comedy legend were, unlike Lanz, the straight man of the situation. They were the reactors to the chaos and Murray’s ability to excel at acting by reacting in the funniest way possible is what continues to make his obscure personality all the more endearing. Instead of Lanz simply coming across the ridiculous parade of characters that Willis, Hudson, Caan, and McBride play as well as the countless detractors of Salima’s dreams and reacting to the outlandishness of the situation he has found himself in Glazer’s screenplay pits Lanz as the center of attention in every set of circumstances he falls into. Some of it is genuinely funny: a soldier finding Murray tied to a prostitute’s bed smeared with lipstick the morning after, random details like Deschanel’s Alabama tour jacket or McBride’s Travit Tritt t-shirt, or simply having Murray belt out a version of “Smoke on the Water,” to a group of unsuspecting Pashtun villagers, but these moments and particulars mean little without a solid story to hold them together.

The story is most certainly the downfall as none of these scenes seem to make sense in the larger scope of the narrative as we go from one to the next. At one point, early in the film, after Ronnie has disappeared and Lanz is looking for her McBride and Caan’s characters tell him that she’s likely at a bar called “The Vulcan” because that is where everyone goes on a Friday night. There is no way that Ronnie would have known about this club given how far the drive is from Lanz’s hotel, but more it becomes painfully obvious that the only reason the script takes us to this location is to introduce us to Hudson’s Merci. In turn, this is for no other reason than providing Lanz with some kind of Jiminy Cricket-like companion. Speaking of things getting tough-let’s talk about the biggest problem with the story: first of all, this is a movie set in the war-torn country of Afghanistan and yet the crisis of character for our lead is whether or not he can still make a star out of the most unsuspecting singer. There are literally car bombs going off and people being decapitated around Lanz and yet none of these white people find it within their realm of moral responsibility to do something more. Anything, really. Second, Lanz seems to honestly believe that if he can get this girl on TV (who will undoubtedly be ostracized by her village and her father for doing so) that he can reverse hundreds of years of tradition. It wouldn’t seem so bad if any of the main characters even once acknowledged the absurdness of their goals given the present situation, but nothing is ever looked at as more than an opportunity for a joke and unfortunately more times than not those jokes fall flat. The only inspired bit Levinson seems to contribute is not even something he should get credit for given its cinematographer Sean Bobbitt (Shame, 12 Years a Slave, The Place Beyond the Pines) who gives the film an interesting color palette by washing it out like its surrounding, sand-filled setting. In the end, Rock the Kasbah isn’t even worth getting worked up over as you’ll forget it as soon as you leave the theater and only become more irritated by it if you continue to contemplate it.