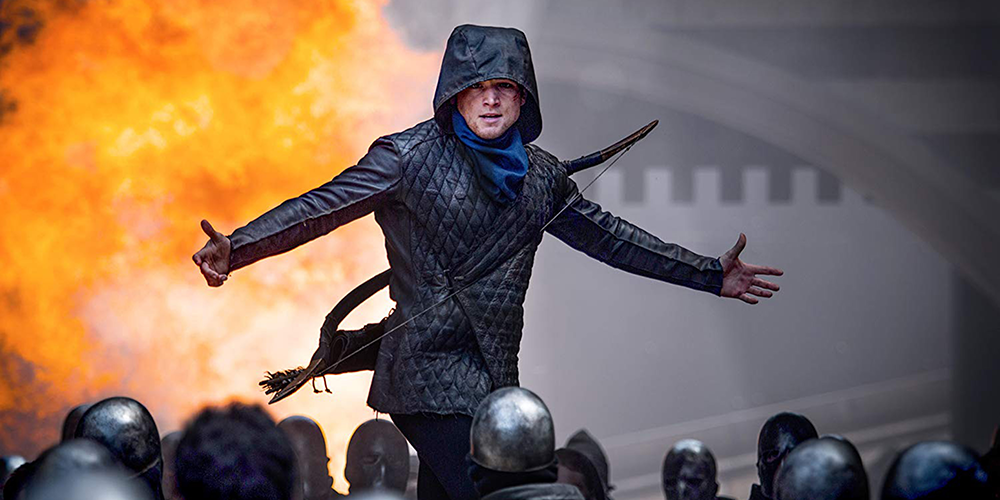 One of those properties that swings back into cinemas at least once a decade like clockwork, you’d be forgiven for not mustering too much enthusiasm for yet another revisionist take on Robin Hood. The last, after all, hardly set the world alight, and concerned itself mostly with the tried and tested franchise formula of devoting its entire runtime to the character’s origin story, sending audiences home with the bitter taste of the old “next time, he’s really Robin Hood!” promise. To be fair, however, Robin Hood (previously Robin Hood: Origins) mercifully elects to take something of a more established route, but does so on its own terms. Albeit terms borrowed liberally from just about every other variation on the property you can think of.

Electing for a more contemporary sensibility, Otto Bathurst’s take sees Kingsman’s Taron Egerton as handsome orphaned lord Rob, torn from the loving arms of Marion and drafted in to fight in the Crusades. It’s in this Call of Dutyesque war zone that he encounters Moorish warrior Yaya (later simplified to “John”) and an unlikely friendship is born. Jamie Foxx brings a surprisingly effective mix of ingredients to the role, a sort of halfway point between Little John and Azeem that sees the older star serve in something of a mentor capacity, but also not abstaining from any of the numerous action beats dotted throughout.

Discovering that his time in the war has seen him declared dead and his beloved now hitched to local politician Will Scarlett, Rob and “John” dedicate themselves to dismantling the war effort from within – utilising Rob’s standing as a lord to infiltrate high society and all them to identify high-value financial targets to be taken down one at a time as they attempt to discredit and undermine the corrupt Sheriff of Nottingham – played with requisite menace and spittle by the always fun Ben Mendelson.

Essentially, it’s Robin Hood by way of Arrow, but with all the “come and have a go” bluster of the Kingsman series. To that end, Egerton seems well and truly at home, defaulting to his Eggsy persona for a movie that’s as far from original as possible, but pretty damn fun nonetheless. Doubtless, its signature trait would appear to be its own in-built sense of tonal anachronism, taking Jake Scott’s “period piece but now” sensibilities from Plunkett & Macleane and applying them to a broader global canvas with both narrative and visual insights into the war on terror, authoritarianism, and even mercenary contractors.

Having made his name on stylised British shows such as Peaky Blinders and Hustle, director Bathurst (making his feature debut here) more than gives us the goods. Fresh and frenzied set pieces light the way – though one CGI horse carriage chase leaves a bad taste – there’s an emphasis on the comically awkward interpersonal chemistry between the players, and they even find a storyline for Marion to call her very own. Something of a rarity, but undone by her still being utilised as the damsel in distress for the sake of narrative convenience.

Robin Hood works best within its own constituent elements – Rob as “the soldier”, Rob as “the Hood”, Rob as “the Lord” – but its in the combination of these elements that it feels uneven and over ambitious. It’s engaging as all hell, and seeing Taron Egerton essentially take up Banderas’ schemes from The Mask of Zorro (which this movie would very much like to be – it isn’t) brings a certain level of smirking fun that’ll easily become as audiences’ highlight. The Arrowesque parkour-inspired action sequences land pretty well too. Egerton’s no Stephen Amell, sure, but he’s infinitely more charming, and the film, to its credit, shows this off every chance it gets.

Easily the most engaging take on the property since Costner dropped the accent, Robin Hood’s a silly entertaining and ambitious, but ultimately only above average take on the material. It’s the first attempt at mining a franchise from Robin Hood that won’t actually elicit groans should they somehow miraculously announce a sequel (which’ll never happen), but it’s a punchy pulse-pounding period actioner with at least some balls, succeeding immeasurably where Guy Ritchie’s godawful King Arthur went so terribly wrong, but still not entirely landing successfully on its own terms, lacking those in lieu of everyone else’s. He hasn’t failed this city, but he’s only done a pretty fun job.