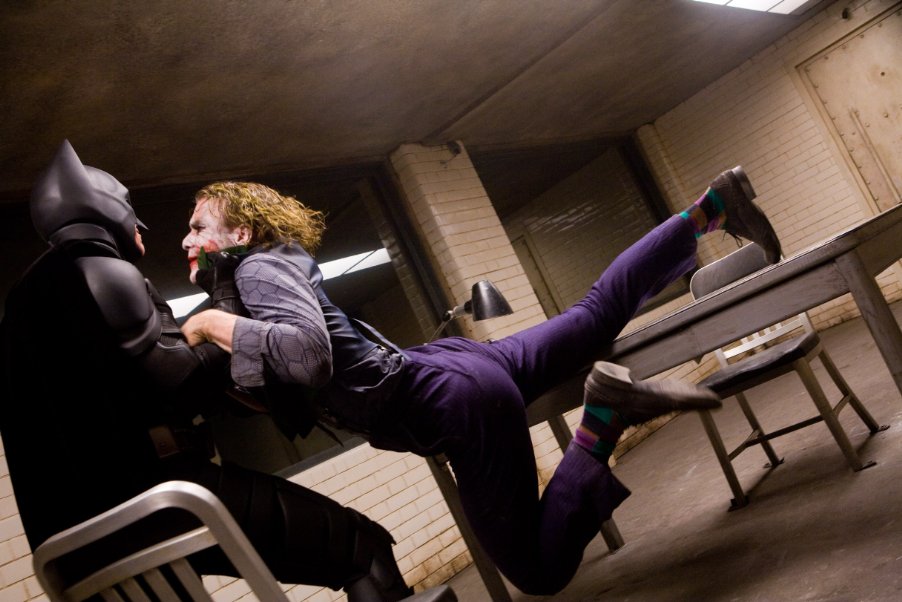 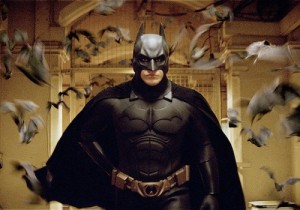 As a part of Movie Marker’s third birthday celebrations, I have been asked to look at my favourite movie trilogy and cast my critical eye over it.

I only ever had one trilogy in mind, and that was Christopher Nolan’s Dark Knight trilogy. So, join me as I take a look at the films that redefined the superhero genre.

When I first heard that Christopher Nolan was going to direct a new Batman movie I, like many, had no idea what to expect. It had been eight years since Joel Schumacher all but killed the franchise with the neon lit, nipples on the suit awful mess that was Batman & Robin. George Clooney starred as the man behind the mask and Arnold Schwarzenegger was the OTT villain Mr. Freeze. Batman & Robin is a film that was so bad its own stars have since admitted it to be an awful film.

Perhaps this went some way to helping Nolan create a successful movie. I mean, he had absolutely nothing to lose.

Warner Bros. made several attempts to get Batman back on the big screen between Batman & Robin and Batman Begins. Rumours circulated in the late 90’s and early 2000’s about which direction the franchise should head in. A Year One type movie was mooted, as was The Dark Knight Returns and even a Batman Vs Superman movie (strange that), but in the end Warner Bros. went with a full on reboot.

Step in Christopher Nolan and Batman Begins. The movie was a critical and box office hit, and proved to be that rarest of things, a blockbuster with brains as well as brawn. The film turned Christian Bale into a household name, and finally got people interested in the character again.

One thing I didn’t expect before seeing Batman Begins for the first time was how good it would actually be. Sure, I had a feeling from the trailers that it would be good but I remember being genuinely surprised back in 2005 at just how good it was.

Not since watching Tim Burton’s Batman and Batman Returns had I been this enthralled by the Batman. The original Batman movies were half Batman and half Burton, and had a distinct feel to them. When Nolan finally came on board though, he fed the franchise with a sense of realism, and went about restoring some pride to the Bat franchise.

The first film in the series is the most comic book in style of the trilogy, and is also the most fun. Yes, there is a Macguffin regarding poisoning Gotham’s water supply and Liam Neeson’s moustaches is, unique to say the least, but there’s not much to dislike in Batman Begins.

In a world where even the smallest of superhero’s gets an origin story, it was somewhat odd then that Bruce Wayne had never had been given justice in this regard. In 1989’s Batman, the death of Bruce Wayne’s parents was shown in flashbacks and changed their killer to a young version of the Joker. This was not the case for Batman Begins. Nolan gave full attention to Bruce Wayne’s formative years and showed us exactly how he became the superhero we all know so well.

Nolan took the time to fully re-introduce the character, not just of Batman but of Bruce Wayne and all those he holds close around him. Alongside Christian Bale there was an excellent supporting cast which included the likes of Michael Caine (a Nolan mainstay), Morgan Freeman, Liam Neeson and Gary Oldman.

Their combined mix of experience and emotional gravitas helped imbue the film with real heart and drama, and not since 1979’s Superman The Movie have we seen such a well known cast of character actors come together for a superhero movie.

Batman Begins influence was a far reaching one, and changed the way audiences and studios view comic book movies. The superhero genre was kick started with the first Blade film in 1998, but started to receive a wider audience with the release of X-Men and Spider-Man respectively in 2000. These films brought superheroes to the fore, and made their own mark on the genre.

Batman Begins, I believe, is still the template for the modern day superhero movie. Its redesign of the origin story, its realistic edge and its ability to pull in big name experienced actors are things that still stand true today, nearly ten years since its release. 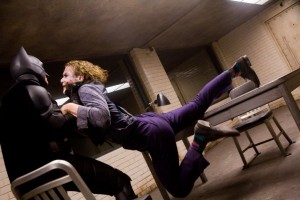 Whenever a movie is successful, a lot of pressure is put on the studio and the creative talent to make a bigger and better sequel. It’s the way Hollywood works, and they demand a bigger income the second, third or even fourth time around, but it takes something special to make a really good sequel, and it’s not something every franchise manages.

Christopher Nolan knew what was expected of him, and instead of delivering a by the numbers carbon copy of the first movie, he gave us something much more.

The Dark Knight was, and still is, a special kind of movie. Nolan upped the ante considerably and delivered a movie that was one part superhero movie and one part crime drama. Nolan has even compared the second film in his Dark Knight series to the classic crime drama Heat.

There are themes aplenty in The Dark Knight. Chaos is dominant throughout the film as Heath Ledger’s the Joker causes anarchy for Batman, his allies and the streets of Gotham. His acts bring our heroes into ever more morally questionable situations about how far they will go to put an end to crime in Gotham City.

Writer David S. Goyer and Christopher Nolan have also commented on how they believe escalation is prevalent throughout the film. There is a sense that the Joker simply cannot be stopped, unless our heroes do the unthinkable to put an end to the disorder he has caused.

The continual acts of violence and terror instigated by the Joker bring into question everything Bruce Wayne has ever believed, even to the point where he wonders, do we need the Batman?

This is not something we were used to seeing in superhero movies, where the characters and even the audience question whether we are better off with these heroes or not. Batman is seen as a source of good and hope, and as a character who takes it upon himself to put right the wrongs he has seen in his city.

But what happens when people take the law into their own hands? Does this not bring about a further sense of anarchy as any guy with access to some Kevlar and a mask can become a hero? Untrained men, who think they can do what the Batman does, all because they have seen him on TV and fancy a go at being the hero, are suddenly on the streets putting themselves and others in danger.

Is the Joker not a creation of Batman? Would the clown prince of crime exist if Batman did not? This is referenced at the end of Batman Begins when Detective Gordon is telling Batman how criminals will take everything one step further now a guy dressed as six foot bat is apprehending them. It’s this taste for the theatrical that brings out the next breed of criminal.

The Dark Knight is regarded by many as the best superhero film of all time, and it’s hard to disagree with that opinion. The only film that rivals it, in my view, is Avengers: Assemble but the two are so distinctly different it hard to compare them. The Dark Knight’s nail biting tension vs the colourful palate of an alien invasion, are worlds apart.

Perhaps then, it is no surprise that the third film in the franchise, The Dark Knight Rises left some fans underwhelmed. Not me, personally, because I loved the film, but there are those who say it is a poor end to the trilogy and doesn’t stand up to the other films in the series. With all due respect, those people are wrong. 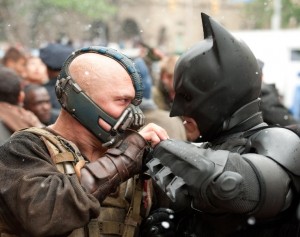 The tragic loss of Heath Ledger during the filming of The Dark Knight meant that his iconic take on the Joker would not be making another appearance here. It also meant that Christopher Nolan had to find a new villain.

Nolan wanted someone who could test Batman both physically and mentally and who better than Tom Hardy’s Bane. Hardy gained 30 pounds for the role and became one of the most physically imposing villains ever put to screen.

Bane was the opposite of the Joker. He was calculated, methodical and had a plan he knew he would stick to. He was a terrorist and wouldn’t stop at any cost to have his plan carried out.

The film is loosely based upon three Batman graphic novels, and has the longest run time in Nolan’s trilogy. Knightfall, No Man’s Land and The Dark Knight Returns all feature heavily here. Knightfall focuses on Bane’s origin and his, literal, breaking of Batman. While No Man’s Land features Gotham falling to a colossal earthquake, and leads the US government to prevent anyone leaving or entering Gotham and destroying all bridges with access to the city. While The Dark Knight Returns dealt with Batman having to come out of retirement to face the escalating level of crime the city is once again facing.

The film primarily see’s Batman as a wanted criminal by those in positions of power and a section of the Gotham police. While there are those out there who still see the good he has done, and wait for the day he comes back.

Another theme The Dark Knight Rises is theorised to have foreseen is the Occupy movement. Nolan denies that his films are politically motivated, but does confirm that he intentionally threw a lot of questions in the air to give the films a deeper meaning.

All three films dealt with various themes of our time. From terrorism, to political corruption, to the distrust in the police force and to the way many people believe that a revolution is needed and could well be coming.

These added elements give the films another dimension, and bring me back to my earlier point regarding blockbusters having brains as well as brawn to entertain us. The Dark Knight trilogy never lets us down in that regard, and Christopher Nolan not only gave us the defining take on Batman but also gave us the defining superhero trilogy, with three films that all other superhero films should adhere to.

Whatever happens next with Batman has one heck of an act to follow.

The Expendables Effect: Why the Action Franchise is a Comeback Cure-All for Aging Movie Heroes