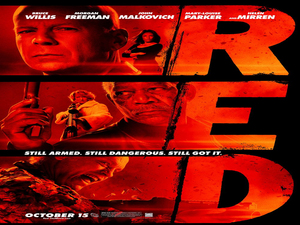 They are Retired… but Extremely Dangerous!

That’s the plot for you in this action-comedy starring Bruce Willis, Helen Mirren, Morgan Freeman and John Malkovich.

Willis portrays Frank Moses, retired CIA agent who is now a target for assassination, with CIA agent William Cooper (Karl Urban) hot on his tail. Can he rely on his old friends Joe, Victoria and Marvin (Freeman, Mirren and Malkovich respectively) to help him uncover the truth before it’s too late?

The cast for the film does quite well in the characters they portray; Bruce Willis does his usual macho action role that we’ve seen before but is more aware about the fact that he’s getting older so is not overacting and is more subtle to his approach. However the additional cast help keep the film alive, such as Morgan Freeman (who I wished had more screen time in this film) and Helen Mirren, who do a good job in bringing more out of their characters. However, I think that more persona could have been brought to the screen while others were trying too hard, which I think was the case for Mary Louise-Parker, who plays Willis’ love interest.

At points where I thought the film was slowing down, it would be quickly picked up, whether it’s by the action sequences or the eccentric personality of John Malcovich, who does a splendid job in keeping me entertained throughout.

In regards to the story, I felt that it was acceptable and kept me enjoyed. However, there were points where the film slowed down and I did not feel engaged to the story. With a predictable ending, you can’t help but think that more could have been done for RED in order to heighten its quality.

Director Robert Schwentke attempts to make an adaptation of the DC comic book series but changes the darker themes within the comic to have a lighter feel for the audience to enjoy. This partly works to his disadvantage, with some the jokes within the film falling flat on itself and the story wavering between its credibility.

The elderly shooting weapons for our entertainment… Although an enjoyable film, you can’t help to think that RED is kiddie version of The Expendables. I enjoyed the film, nevertheless and I recommended it for those who want a couple of laughs and relax to a pleasing film.

RED is like Marmite; you either enjoy it or you don’t.