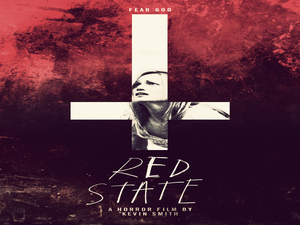 ‘Written and Directed by Kevin Smith’. Six words that should cause fear and panic in the minds of any sane person having seen the last film to bear these titles, Cop Out. Smith’s last film was a cataclysmically bad ‘comedy’, the only use of which should be for the police to show to criminals to get a confession from them. Waterboarding would be a preference over watching that film again.

Smith has, however, gone some way to redeeming himself with his latest film, Red State; his first foray into the thriller genre is a decent effort and my favourite of his since Clerks. This isn’t too much of a compliment considering his output since 1994, but I believe this to be true.

The film is roughly split in two halves; the horror/thriller which opens the movie, and the gory shootout which concludes it. The first half is by far the better of the two.
Set in an unnamed small town in Middle America, the film opens with a demonstration outside a church where the funeral of a gay student is taking place. The demonstrators are part of the Five Points church, an ultra-right wing, fundamentalist Bible worshippers, holding signs proclaiming hateful slogans such as ‘God Hates Fags’. The leader of this church is Abin Cooper the film’s antagonist and a man whose religious beliefs are so strong, we’re told even the Nazi party publicly distanced themselves from him.

Smith soon introduces us to three students, desperate for a good time in this backwards town who find a prostitute online just a few miles away. They drive out one night to see her, and this is where the horror begins. Drugged by the beer she gives them, one of the boys awakes to find himself scrunched up in a cage fit for an animal; ironically, he is now in a house of God, but the things he is about to witness is a far cry from ‘goodwill to all men’. Another local gay man is attached to a crucifix by cellophane, and gag in his mouth. By this point the film has become truly unsettling and Smith has commanded his audience’s attention. Tight angles and lens choice from inside the cage gives the scene a claustrophobic feel, and you sense real danger from these very real people. No monsters or creatures here, just men, women, and children hanging on the every word of Abin Cooper.

Here, the script is at its strongest at the point; Smith gives Cooper an extended dialogue where he justifies what the church believes in and how it is written that the gay man they have captured is a sinner and must die. It is fascinating to watch because we know very similar things are going on in reality. A special mention must go to actor Michael Parks for his all-too belivable performance of the deluded and terrifying Abin Cooper.

When the film’s production was first talked about, much was made of the use of Red Camera (the all-digital camera which is favoured now by Steven Soderbergh and David Fincher) and Smith’s ability to edit straight away in-camera and present a polished cut just 2 days after filming was complete. The results of using the camera would lead you to believe the budget was far higher than the reported $4 million it cost; the lighting is crisp with its dark green and grey tones, and the digital process makes for a documentary or news-like feel at times. You’d never know it was shot in only 25 days.

The second half of Red State loses the horror it had built up so well, and turns into a Waco-style shootout once a Sheriff’s deputy is killed at the church for reasons I won’t go into here. Sadly for an actor of John Goodman’s ability, it is at exactly his entrance in to the film that the focus shifts to the ‘blue state’ side of things, and we lose sight of Cooper as a scary character. This is a major flaw in Smith’s story because Cooper is the reason why we’re drawn into the film, we’ve seen a FBI agents and SWAT teams countless times before, and Goodman’s character brings nothing new to proceedings. Goodman is fine in the role, and his questions over the handling of the siege again echos real life cases such as Waco, but the film loses its essence, its ‘unique selling point’.

The shoot out goes on for too long and doesn’t hold the attention as the action goes back and forth between the red and blue. A much better film would have kept the shootout confined within the church, with nameless and faceless FBI agents seen from a distance. This would have given us an insight into the thought process of a fundamentalist’s view on guns and killing, and the possibility of meeting God before the day is through. What do these people think and how do they act when they are the ones under pressure? Do some question then their beliefs (hinted at in the film) or do they all ‘drink the Kool-Aid’.

Red State is a film well worth seeing and will be in the better half of 2011’s offerings. The problem is there is a much better film in there, somewhere.

Pirates of the Caribbean: On Stranger Tides