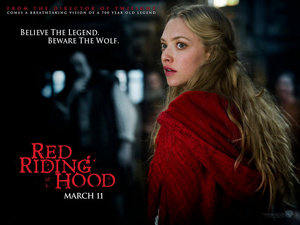 Little Red Riding Hood, everyone knows the fairytale well. A little girl wearing a red cloak sets out to deliver food to her sick grandmother who lives in the middle of the forest. She is stalked by a wolf that wants to eat her. After telling the wolf she is visiting her Grandmother, the wolf cleverly goes and eats her grandmother and disguises itself to take her place. Little Red Riding Hood enters her Grandmothers house only to be eaten herself. But just in time she is rescued along with her Grandmother by a Woodcutter who cuts open the wolf and kills it.

The story has been around for a very long time, surviving the centuries with its powerful message of danger, deception and innocence. Despite having many interpretations, there seems to be one underlying common factor that is present in many of these variations of the tale; sex and sexual awakening.
It is no surprise that Catherine Hardwicke’s (known for 2008’s worldwide box office smash Twilight) most recent vision, loosely based on the fairytale, plays on this idea of sexual awakening but also strays quite far from its usual story. In this version we see the wolf portrayed as a werewolf terrorizing the small medieval village of Daggerhorn, whose inhabitants try to keep it at bay with offerings and sacrifices of its finest livestock every full moon.

Amanda Seyfried (Mean Girls, Jennifer’s Body, Mamma Mia) takes the lead role of not so ‘little’ Red Riding Hood, or Valerie as she is known by in this adaptation. Since a young age she has been in love with her childhood sweetheart Peter (Shiloh Fernandez) but Mother and Father, Suzette (Virginia Madsen, Electric Dreams, The Number 23) and Cesaire (Billy Burke, Twilight, Untraceable, Along Came A Spider) have plans to be trove her to Henry (Max Irons) son of wealthy Blacksmith, Adrian Lazar (Michael Shanks) As the werewolf’s monthly hunt is interrupted, by Valerie’s older sister Lucy, she is killed, sending the villagers on a bloodthirsty pursuit to capture and kill the beast.
After supposedly slaying the creature, the villagers partake in celebrations, thinking that their ordeal is over. A famous witch hunter, Father Solomon (Gary Oldman, Dracula, The Fifth Element, Harry Potter) arrives at the village unexpectedly on his travels, interrupting the festivities and informs them that they have only killed an ordinary wolf, revealing the beast to be a werewolf and that it could be any one of them.

Red Riding Hood is a decent attempt from Hardwicke to get back into the spotlight, after being dropped from the twilight saga, which came as a big surprise considering the success that she helped to bring the franchise.
Despite the American accents, smouldering glances from the unnaturally, gorgeous, clean, hair-gelled, emotionless love interests Fernandez and Irons (relatively unknown actors chosen for eye candy rather than for their acting) and the constant reminder of the sexual aspect of the story by screen writer David Leslie Johnson through metaphors, particularly the blood moon cycle that is mentioned throughout, Red Riding Hood proves to be a pleasant surprise to those going into it expecting just another Twilight replica.

If there were going to be any predictions about this film, it would be the expected love triangle, predicted when it was revealed that Hardwicke would be directing. But, to Twilight fans disappointment, this is not the case with this movie, as Seyfried’s character wants nothing to do with her husband to be, terminating the inevitable question of Which guy will I love by the end of this movie?
There are times that feel like the script could do with a lot of work, particularly with Oldman’s character Father Soloman, who’s lines and deliverence of them make him sound like he has jumped straight from a different film, which is such a shame as Oldman brings so much to each performance. However, the same can’t be said about Seyfried, who could pretty much carry the entire film herself if she wanted to within the deadpan emotionless crowds of villagers and her would be suitors.
The special effects arent all that impressive. The heavily cgi’d werewolf that slightly resembles the Twilight wolves is a little dissapointing at times, obviously more money was spent on the costumes, set and Seyfrieds constant ability to always stay looking perfect in every scene. However, some praise should be awarded to Brian Reitzell & Alex Heffes, whose score consisting of both modern sounding and medieval ambience give the entire film the atmosphere it was intented, despite some scenes being over powered by the crooning of a Kate Bush sound alike.

There arent many references to the fairytale throughout the film (other than the wolf and red cloak), but the scenes where Valerie visits her Grandmother (unimagitively named Grandmother) are a reminder of what this whole thing is about. Played by screen legend Julie Christie (Darling, Doctor Zhivago) who delivers possibly the only belivable performance out of the entire cast. (along with Seyfried) Christie plays the part well as the creepy Grandmother, but is a constant, too obvious red herring with an over the top amount of jumps and scares.
The identity of the wolf remains a mystery all the way to the very end. The story twists and turns so much dropping red herrings and false information, that by the time the wolf is revealed you will be so lost that it would never have occurred to you that this person revealed to be the werewolf could have even be a candidate. So, is this a respectable attempt at twisting the well-known fairytale into a blood soaked horror? Well yes and no, it is a decent attempt at re-telling the classic tale of Little Red Riding Hood with its beautiful young cast, pretty scenery and a passable storyline. But the film doesn’t come close to what can be classed as horror. The lack of violence and gore take away the brutality and terror that could have made it scary. One can’t help but to think it is intended for teenage girls who have nothing to do until Breaking Dawn hits cinemas.

In summary, Red Riding Hood, is a reasonable endeavour by Catherine Hardwicke. It is not going to blow you away but it is far from deserving of the worst film of the year title.