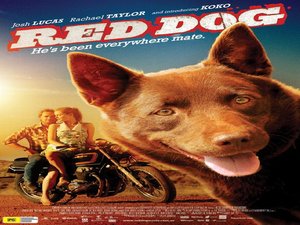 Australians are the best storytellers on the planet. Australian men love to sit around at a bar and exchange tall tales of sporting triumphs and romantic conquests.  Australian women meet at coffee shops and gossip for hours about nasty in-laws and new additions to their wardrobe. Despite our narrative skills, however, we seem to have a problem converting our talent to the greatest storytelling medium of all – film.

The Australian film industry is more miss than hit, with most films being a diabolical mix of drugs, murder, incest, rape and more drugs.  I worry that the United Nations might send a peace keeping force to quell the unrest in Australia after seeing our latest crop of new releases.

It breaks the heart of any film lover when they see a bad film, but it’s crippling when that film is from their homeland, and Australian audiences are scarred.  Luckily, those wounds are somewhat healed by the new Australian film ‘Red Dog’, which is undoubtedly the best locally-produced film of the year.

‘Red Dog’ tells the story of a stray kelpie-cattle dog cross that wanders into the mining town of Dampier in Western Australia in the 1970s.  Soon, the dog becomes the official mascot of the community and changes the lives of everyone.

Loosely based on a true story, ‘Red Dog’ captures the unique Australian spirit of a small mining community.  Essentially, it’s a microcosm for the entire country and everything that’s great about Australia.

Director Kriv Stenders touches on themes of multiculturalism, mateship, love and loss.  He does a great job of establishing an ensemble of lovable characters and letting their stories play out while pushing the overall story forward.

Not a moment is wasted and each frame is dripping with beautiful scenery from locations across Western Australia, which is shot brilliantly by cinematographer Geoffrey Hall.

Like the population of Australia, the cast are a mixed bunch from all around the globe.  The performances are all excellent and are never overplayed.  Josh Lucas and Rachel Taylor make a nice romantic pairing, while the supporting cast revel in the fun roles they’ve been given, including Noah Taylor, Loene Carmen, Rohan Nichol and Arthur Angel – who almost steals the show as an Italian miner.  The real scene-stealer though is the Red Dog himself, played by Koko – a charming and enthusiastic canine performer.  Full credit goes to the all the dog trainers for working hard to make Koko a superstar.

The soundtrack is full of pub classics that will have you tapping your feet and rocking along to Daddy Cool, The Angels, Stevie Wright and more.

‘Red Dog’ is a film everyone should see, even if they don’t fall into the family audience demographic at which the movie is being pitched.  It showcases the importance of community and the ways we bond together to get through good and hard times.  ‘Red Dog’ is a heart-warming piece of great Australian filmmaking and one of the year’s best.