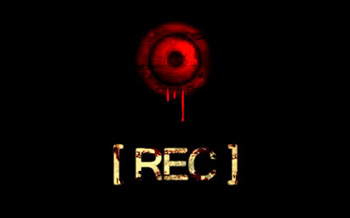 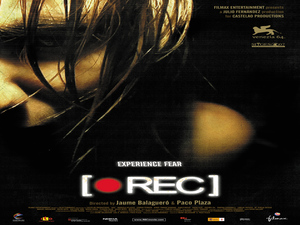 Video Camera….Check. Attractive Female Lead….Check. Claustrophobic Apartment Building….Check. And finally…Tons of zombies to ruin the day….Check. Add all of this together and the carnage begins in the 2007 Spanish ‘found footage’ horror movie [REC] co-directed by Jaume Balaguero and Paco Plaza.

[REC] follows television reporter Angela Videl (Manuela Velasco) and her cameraman Pablo (Pablo Rosso) who are currently filming on location at a local fire station in Barcelona for their TV show ‘While You’re Asleep’ which focuses on the people who work nightshifts in various jobs. During the show’s filming, the fire station receives a call about an elderly woman who is trapped in her apartment so they set out to resolve the situation, Angela and Pablo in tow.

When they arrive at the building they make their way to the woman’s apartment and break down the door to gain entry. When they do find her, events start to take a sinister turn. The woman becomes very aggressive, almost zombie-like and starts to attack one of the policemen on site before ultimately biting him and also causing the death of herself and one of the firemen. Angela and Pablo return downstairs with the rest of the fire crew and attempt to calm down the residents of the building. Almost immediately the entire apartment building is quarantined by the military leaving the residents, the fire fighters, Angela and Pablo trapped inside the building along with what they think is a viral infection causing the aggressive nature of its victims.

Unaware of the evil spreading around them, and armed with only a video camera, all they can do is film the events of the night as they run, hide and fight the terror that they eventually come face to face with.
Now, I am a huge fan of the ‘found footage’ genre. The first movie of this genre I ever saw was 2008’sCloverfield and that blew me out of this world. Since then I have had an obsession with the genre. Having an obsession with zombie movies and this shiny new genre that I had only just discovered, I heard all about this horror film called [REC] that was released back in 2007 that had a video camera and zombies. I immediately purchased this movie without even seeing a trailer.
From start to finish, I was hooked, frightened, even holding a pillow at some points! This is one of those films that you have to see! Do not be put off by the subtitles or the Spanish language that the movie is filmed in. This movie is a superb twist on the zombie genre. It is a terrifying, gore filled, claustrophobic nightmare that has you on the very edge of your seat, even until the very last second of the absolutely horrifying climax.

The twist on the zombie genre that we see here is that the zombies are in fact humans possessed by demons, which is a fresh new idea that Balaguero and Plaza have injected into the genre and adds an even better feeling of evil to our people-eating friends we see in the movies. The acting from leading lady Velasco is brilliant (she won awards for this film, not often that happens in horror!). The viewer really feels every single emotion during the nightmare that this poor reporter is going through. Rosso on occasion is seen in front of the camera but it is behind the camera that he really shines. Even without seeing his face, you know exactly what he is feeling throughout the entire movie just through script and his actions with the camera.

The supporting cast are mainly there as zombie food, we all know that, but despite the one-dimensional acting, we do get to meet every single one of them and hear a little into the stories of their events that night which often reveals key points of the story or details that will be mentioned in the sequel. There is no music throughout the entire movie other than the occasional sound of a helicopter or the authorities outside the building. This completely adds to the realism of the film as we are constantly on edge waiting for something to happen.

The lighting used creates the perfect atmosphere for setting up the jumps and scares that the audience are certain to encounter at any point during the film. In particular the petrifying final scene of the movie that takes us to the attic of the building where our protagonists encounter something that can only be described as ‘shit your pants frightening’ in a pitch black night vision scene that still haunts me to this day.
[REC] is an outstanding return to the horror genre after some of the appalling attempts we’ve seen over the past few years. I urge any horror fan, film buff and anyone who just wants to be scared to do what I did and go buy this movie immediately. For extra fun, make your girlfriend watch it. Make your mum watch it. Why stop there? Take it round your Nan’s on a Sunday!

This is a real horror movie that is fun to watch with others and will keep you awake at night. [REC] also got an American remake in 2008 titled Quarantine. Obviously the fact that you are reading this shows which one is superior and which one doesn’t deserve to be reviewed.

One Flew Over The Cuckoo’s Nest