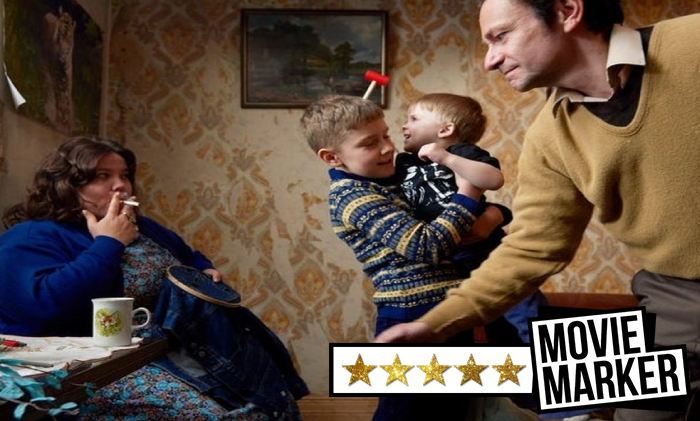 Richard Billingham has been of Britain’s most prominent artists over the last twenty years. His iconic book ‘Ray’s a laugh’ depicted his parents lives in a council flat during the Thatcher era. The images have become iconic in the art world. Now Billingham is bringing the vivid memories of his childhood to film. Ray & Liz premiered at Locarno Film Festival in 2018, receiving high praise and a special mention from the jury. Set in the outskirts of Birmingham and on the margins of society, the Billingham family muddle through a life decided by factors beyond their control.

Shocking at times and laced with an unsettling humour, three episodes unfold as a powerful evocation of the experience of growing up in a Black Country council flat. Ray & Liz is the rebirth of British social realism – A hybrid of Lynne Ramsay’s Ratcatcher with the body of Mike Leigh’s work spliced with Terrence Davies soul.

The film bares Richard Billingham’s soul in the darkest of ways. Memory never reveals the whole truth his tale is raw and tragic. His parents were apart of a culture where the working class suffered. The Thatcher era is harshly encapsulated in Ray & Liz. The neglect that Richard and Jason receive is made to feel normal throughout the film. A chance meeting at the park between Jason and his parents brings to light the abnormality of their family ties. Living in an loveless home is unimaginable to me yet this scene encapsulates the boys upbringing.

Ray & Liz may be a haunting look at the past, but there is a sense of joy inside it too. Looking through the eyes of the boys you can see the happiness they had from simpler moments. Eating red cabbage sandwiches, playing pranks and going to the zoo alone. The wonder of childhood takes you away from the neglect for a small fragment of time. During a Q & A Billingham explained that it took him a while to forgive his parents. Hatred is not the purpose of the film, and it seems to be his way of healing.

The story is split between three separate moments in Ray & Liz’s lives beginning with Ray taking redundancy, then being moved into a flat and their older-selves weave between the narrative. There is no real plot to speak of, and Billingham doesn’t honestly care about this.

Ray & Liz is a memoir of his past; the moments that seem to be his darkest. These are the moments that have affected and moulded him the most. Billingham entrusted Cinematographer Daniel Landin (Under The Skin) with his body of work. Using a 16 mm lens Landin’s photography creates complex textures. You can feel and smell the era from his potent cinematography. Beck Rainford’s production design brings the period to life. Every detail is hauntingly authentic from a pack of cigarettes, dinner plates, clothing and even the carpets.

The ambience of the late ’70s is rife, Rainford’s meticulous detail brings Billingham’s photos to life. Ray & Liz would be nothing without its cast and a vast amount of source material they embodied his family. Ella Smith and Justin Salinger depict Ray & Liz with high tenacity and anger. From the footage that is available of his parents, they have become them in mind, body and soul.

Ray & Liz is a stunning cinematic memoir and a powerful debut from Billingham.