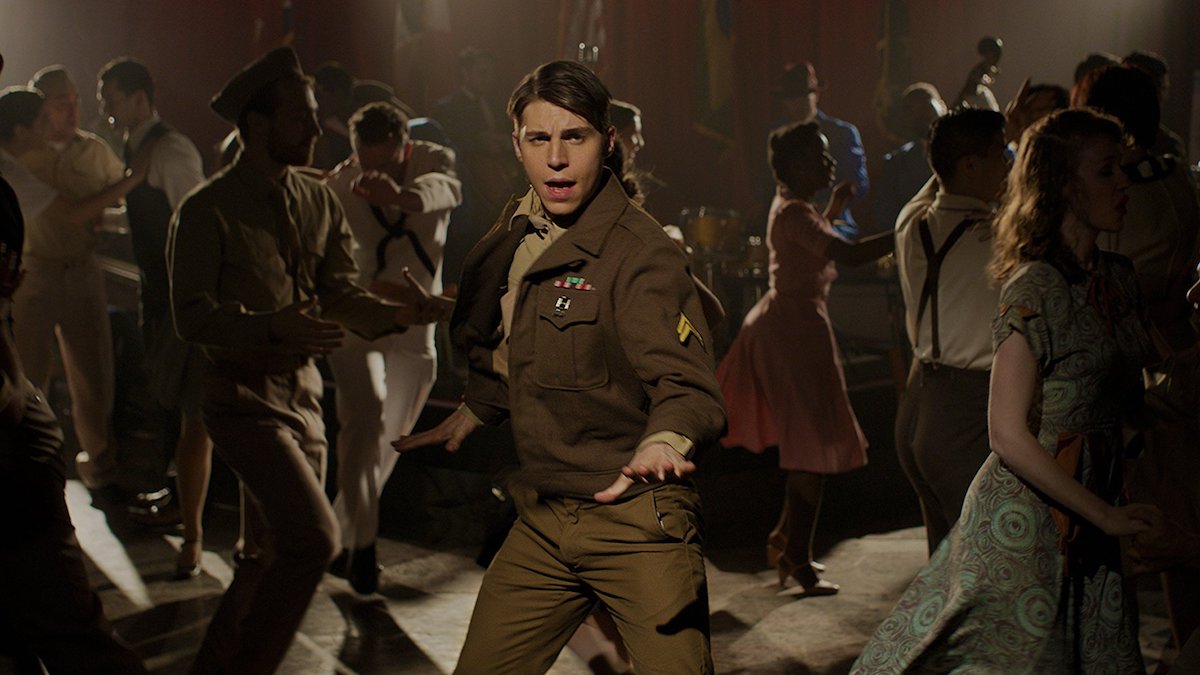 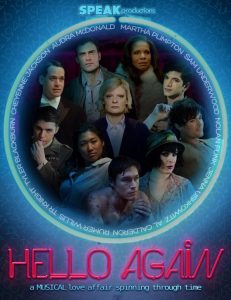 “I should have met you in another life”

Best describes the newly adapted version of the musical “Hello Again” directed by Tom Gustafson. Ten encounters, ten time periods and ten lost souls navigating through love’s bittersweet embrace or was it lust? The sexy musical is based on the musical of the same name written by Michael John LaChiusa, also based on the 1897 play La Ronde by Arthur Schnitzler, scrutinizing the sexual morals and class ideology of its time.

The film starts mysteriously in what could be described as a magic pleasure box. Ruth, a middle-aged woman, seats in front of red curtains. The curtains rise and a young man appears on a screen wearing red latex and a red mask.

“When you are finish looking outside, look within”

What follow are ten daisy chained sexual encounters throughout the 20th century. All stories connect easily through their very similar structure. Each time an “Angel” wants love while its counterpart seeks pleasure.  Actors perform twice and glide from one story to another, blurring the boundaries between time periods and characters as if we were being told the same story over and over again.

If it is likely that Schnitzler was more focused on using sexual encounters between unlikely partners to denounce class ideology, for LaChiusa and Gustafson, the focus is more on gender, creating a real gender free environment. Even sex scenes seem to happen regardless of the gender of the character.

Time periods and characters rapidly become secondary and we are left with ten doomed souls condemned to survive in a world that cannot give them what they seek. Earlier this year the Bunker theatre in London staged an adaptation of La Ronde, directed by Max Gill, pushing it a bit further, adding a real wheel on stage.  As easily as a tinder swipe, one spin decided each night, which characters would meet and who would play them, regardless of the actor’s gender.

Gustafson makes a good attempt at creating space between characters that are having sex, if only by the fact that none of the duos seem to end up together. The boat sinks, the nurse’s shift ends, the soldier sails off and the lover leaves.  The many encounters or “carnal gratifications” may start off with intensity but end up being cold and almost mechanical.

Luckily the film is not always as blue as its characters and we happily dazzle from the sexually liberated seventies to the fashionably questionable eighties always animated by the musical numbers, unfortunately too rarely attached to a dance number.

Out of the many familiar faces, Tyler Blackburn is charming, sexy and touching: the ultimate “Angel”. But it is Audra McDonald and Cheyenne Jackson that stole the show.  In addition to obviously being the best voice of the film, six-time Tony Award winner, McDonald brings back the glamour and thrill of musicals as both the outdated singer and discarded lover. Always determined, Jackson carries the witty and sexy bits of the film.

Gustafson is definitely in familiar territory following the success of his last musical,  “Were the words mine” centred on a bullied and demoralised gay student at an all-boys school.  But the lengthy ten encounters in “Hello Again” can make us wonder, halfway through the film, if there is actually a point to so many bitter endings.

The film does end on a positive note. Back in the magic pleasure box with Ruth, she admits she woke up in a stranger’s bed with no recollection of how she ended up there.  Strangely enough, the young man does not want money. They may be on the same page after all. She gets dressed, leaves and smiles.

Hello Again is a sex-fuelled musical with a clear message on gender equality that never gets old. Sometimes lengthy, the film only gets better with time with most entertaining performances towards the end.

Regardless of time and gender, relationships seem to bring out the best and the worst of times and of us but there may still be some kind of hope for our generation.