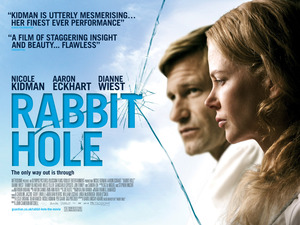 Rabbit Hole: a fitting title for a movie that sucks you in from the very beginning. With a strong cast, a plot that leaves no stone unturned, and incredible directing that was no overwrought, this movie is one of the most underrated in 2010. The movie fascinates watchers with its warmth, reflection, and a real-life perspective of someone who has lost a child. No problems are solved completely, but meaningful conversations are exchanged and the burden becomes slightly easier to bear. I couldn’t get enough of the dialogue. Quite simply, it was just beautifully made.

I think it was a smart choice to start the movie after the death occurs. We don’t need to see what happened so much as how the characters deal with it. Although in the beginning Nicole Kidman reveals a little bit of her Australian dialect, the rest of the movie she is believable as an American mother who has lost her son. Becca (Nicole Kidman) plays the mother who’s 4-year old son car killed in a car accident. Her character is bitter, cynical, mad, and not receptive to traditional channels of help, i.e. group therapy. The essence of her character lies in the response to other of the other group members, “Why didn’t God just make another angel?”

One of the most touching scenes is when she is examining her son’s painting on the refrigerator all alone with her thoughts. You can just feel the sadness and despair. As she attempts to get a job with her former employer we find out all of her former colleagues are gone, showing us that life went on without her.

When not at home, most of her time is spent stalking the boy who killed her son, Jason (played by Miles Teller). Over time she develops a relationship with him, one in which they both can almost lean on each other, in an effort to be comforted. Becca needs this as her and her husband Howie (Aaron Eckhart) are continually fighting over keeping memories of their son or getting a fresh start by not clinging to what has gone.

The relationship between Becca and her mom Nat (Dianne Wiest) was well-done, as we find out that Nat also lost a child at 30 years of age. The mother-daughter dynamic is shown it its full glory, and because of what happened to both of them the relationship was strong, but also, strained, as Nat attempted to compare the deaths side by side, which infuriates Becca. The words offered by Nat in the laundry room scene were certainly impactful and calming.

As the story progresses Jason & Becca become close, and we come to learn more about the movie’s title. We see both of them vulnerable with their guards down, just trying to understand and come to grips with what has happened. Becca learns to car about Jason, which is the opposite of how Howie feels about him.

The relationship with Becca and Jason is very special, as deeper concepts involving parallel universes are discussed, leaving us with the possibility that they exist in other universe being happy. “Somewhere out there I’m having a good time”. Wonderful.

Tender subjects are explored superbly, with a no-holds barred approach. Topics such as sex after a child’s death, possible infidelity issues, and deleting a treasured video by mistake. The ending is beautiful and well-orchestrated. I have nothing negative to say about this movie. It’s utterly a treasure.

Dead Hooker in the Trunk