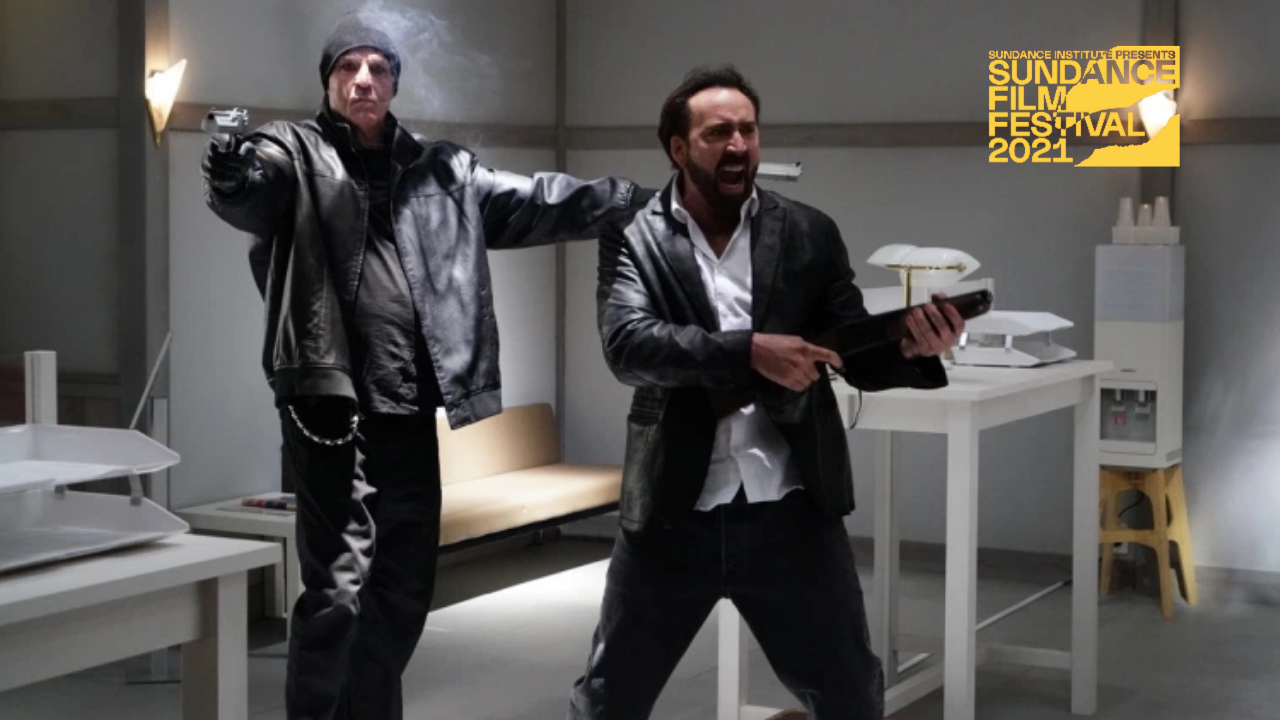 Nicolas Cage and Sion Sono are behemoths within genre cinema between them, they have conjured worlds we can’t even imagine. Sono has directed over 50 films, and each one has stood out from the crowd. Now throw Nicolas Cage into the mix, and the intensity levels should erupt surely? There has been a lot of talk about Prisoners of the Ghostland for quite some time, and it is finally time to feast upon it.

In the treacherous frontier city of Samurai Town, a ruthless bank robber (Nicolas Cage) is sprung from jail by wealthy warlord The Governor (Bill Moseley), whose adopted granddaughter Bernice (Sofia Boutella) has gone missing. The Governor offers the prisoner his freedom in exchange for retrieving the runaway. Strapped into a leather suit that will self-destruct within five days, the bandit sets off on a journey to find the young woman—and his own path to redemption.

Sion Sono’s English language debut is a hybrid of the director’s oeuvre and western influence. While this is not as unhinged as some of his other films such as Why Don’t You Play in Hell? Tokyo Tribe or Strange Circus (I could go on) it was a fantastic postapocalyptic-spaghetti western-samurai film. The world-building is well established from the very beginning, and the simplicity of the plot lets this bizarre world develop. One of the directors many tropes is to leave deep metaphors within his work even while we are entertained. Within the films, Sono challenges to reflect upon redemption and how time can be our enemy. The films set design leaves clues as we see clocks around us and our protagonist sees this. Sono includes redemption as a symbolic gesture to find inner peace with ourselves.

While it wasn’t the gorefest, some Cage and Sono fans anticipated it didn’t quite need it. This odyssey is a barrage of unique and vibrant characters, and each one has a role to play in Prisoners of the Ghostland. Sono places the action/fight sequences at just the right time. Each sequence shows this hybrid approach of western and eastern cinema, the combination of cowboys and samurai further enhance this dystopian world. Our main samurai Tak Sakaguchi has some of the finest fight scenes in the film. The Japanese action star remains silent in the movie, but his badassery needed no words. One particular scene with quite a famous song was pure poetry in motion.

For most people, the attraction of Nic Cage was the main pull, and as always he doesn’t disappoint. His line delivery and ridiculous stair fit this world entirely. He fits into the world of Sono quite easily, but his co-stars don’t have as much of a spark. Sofia Boutella is serviceable and doesn’t quite bring her usual badassery to the table. The only cast member on par with Cage was Tak Sakaguchi, but I will stop fanboying on him. Prisoners of the Ghostland isn’t the usual Sono film, but he has a lot to say in a script he didn’t write. The vibrant neon colours of Samurai Town will dazzle you, and the wasteland outside will keep you in their world.

Prisoners of the Ghostland is a wild ride and if this was your first Sono, don’t make it the last!