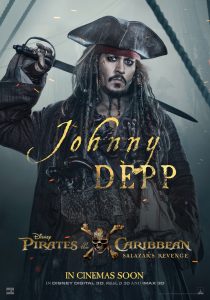 Save for Johnny Depp’s accountant and the marketing department at Disney, nobody was asking for a fifth Pirates of the Caribbean movie. On the back of four sequels that never quite recaptured the adventurous tone of the 2003 series launcher, two sets of directors, and a fourth instalment most seem unable, if not unwilling, to recall, it’s telling then that Salazar’s Revenge – bizarrely retitled for the UK from the more fitting Dead Men Tell No Tales – goes back to the franchise well to bring together the various story elements for what’s either a definitive closing chapter or a headache-inducing relaunch for maritime jaunts yet to come.

Has reading our review of ‘Pirates of the Caribbean: Salazar’s Revenge’ made you thirsty for rum? Head to 31Dover and check out their multi-award winning Pirates Grog

The latest instalment follows rising star Brenton Thwaites’ lead, Henry Turner – son of legacy characters Will Turner and Elizabeth Swann. On a lifelong crusade to free his father of the curse that saw him exit the initial trilogy back in 2008, Henry sets off in pursuit of the trident of Poseidon – a mystical artefact with the power to undo any curse of the sea. Teaming up with exuberant young astronomer Carina (Kaya Scodelario) and misfit pirate Jack Sparrow (Depp), Henry’s quest brings him into the crosshairs of ghostly captain Armando Salazar (Javier Bardem) – who, along with his crew of cursed comrades, has something of a bone to pick with Jack.

Retaining the now firmly-established franchise formula of OTT CGI-enhanced spectacle with little semblance of a coherent plot, Salazar’s Revenge ticks along for the now requisite two-hour-plus runtime with little to add to the series bar a poorly-conceived capping of mythology long forgotten by anyone bar the most devout fans. The majority of plot movements throughout fall squarely under the banner of “just because”, and besides Thwaites’ new lead, nobody’s motivations seem particularly logical. That Jack Sparrow’s faux-iconic compass now has all the functionality of a sonic screwdriver then isn’t even worth harrumphing at when it does so in the midst of a movie so laden with contrivances (the Piratesverse evidently regards Smith as a unique name. No joke) and inconsistencies that it verges on making the Transformers universe look like  it was crafted by Ken Burns.

Thwaites does though make for a halfway decent lead as Henry, while Scodelario makes fine work of a well-written female lead – even if said character is arguably nothing more than a retread of Kiera Knightley’s Elizabeth – which says some frankly worrying things about Henry. Depp meanwhile slums his way through yet another drunken stroll to the ATM, while Geoffrey Rush is back on drooling leather-tongued form as – the frankly unneeded – Barbossa, but Javier Bardem’s perhaps the most underserved by this fifth go around. Saddled with a character devoid of clear motivation or goals, Bardem is saddled with some mystifying sound design that quickly reduces his broken English into something closer to gravelly mumbling. Not that it feels out of place in this latest Pirates romp, but it’s obviously ill-fitting to a performer of his stature.

All of that being said, if you’re someone who genuinely enjoyed Pirates 2-4, then you’re more than likely going to be in for a treat here – Salazar’s Revenge going out of its way not to rock the proverbial boat as regards tone, style, or storytelling ability. New directors Joachim Rønning and Espen Sandberg (Kon Tiki) try in vain to claw just enough fertile visual terrain from an already pretty worn series, but writer Jeff Nathanson seems more visibly concerned with ensuring he can make his work on Speed 2: Cruise Control look adept in comparison than he does in bringing anything genuinely interesting to the table. It all comes to a close with the sort of open-ending promise of Jack and his crew embarking on a new series of adventures, but after a hundred and twenty-nine thunderously dull minutes, you’ll have to really strive to want to see any of them.