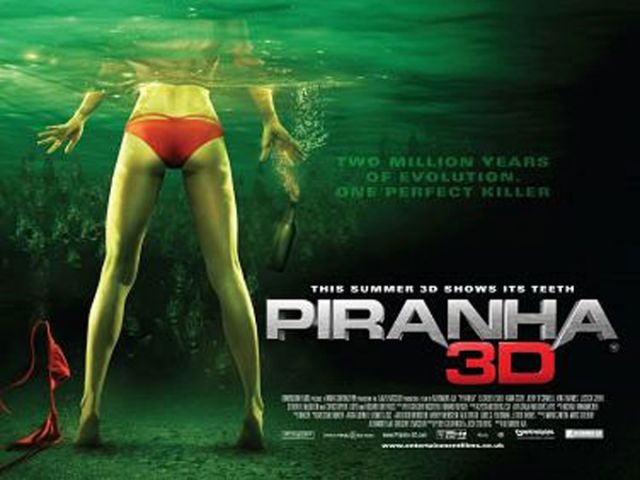 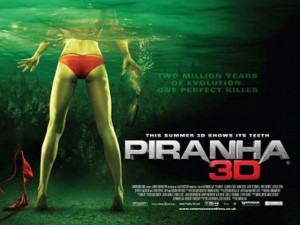 Many movies took inspiration from Steven Spielberg’s ‘Jaws’ after its successful release in 1975. Three years later ‘Piranha’ jumped at the chance to recreate the same success. A B movie involving a swarm of man-eating piranhas but it didn’t have the same effect as a killer great white shark. Now ‘Piranha’ gets a modern update. It won’t be known as a classic in many years to come but it’s an entertaining ride.

This time around a minor earthquake hits Lake Victoria, splitting the lake and releasing a mass of hungry piranhas. It’s just in time for them to feast on young flesh as spring break begins on the lake. Teen Jake Foster (Steven R. McQueen) is convinced to help pornographer Derrick (Jerry O’Connell) find locations for his film, which features adult stars Danni (Kelly Brook) and Crystal (real life porn star Riley Steele). All four set out on a boat with Jake’s crush Kelly (Jessica Szohr) tagging along. Soon the pre-historic piranhas interrupt spring break and things get worse when the boat Jake is on crashes. Stranded they must avoid the deadly creatures that lurk beneath the waters.

‘Piranha’ definitely knows its target audience. Full of outrageous gore and nudity teenage boys will be in their element. But it’s the silliness that makes it so great. It’s fully aware of it intentions and it’s having fun working by the B movie conventions. You know it’s not to be taken seriously when two fully nude girls are doing an under water dance to the Flower Duet from Lakeme.

Director Alexandre Aja goes to the extremes with extensive amount of blood and gore. The make-up is finely detailed and the gruesome special effects add shock value. The piranhas themselves look amateur on occasions but close up shots reveal a threatening looking creature.    Away from all the violence the film visually looks good. Aja shows confidence in his direction as he has a good understanding of this genre. He has also built the film around an impressive cast.

It’s surprising at the actors involved in ‘Piranha’. A respected Christopher Lloyd makes an appearance and once again plays a mad scientist. Elisabeth Shue plays Jake’s mother and turns out to be quite the heroine. It also features up and coming stars Steven McQueen and Jessica Szohr and eye candy Kelly Brook. Of course ‘Piranha’ isn’t short on cameos. Richard

Dreyfuss, who is best known for his role in Jaws, makes a good meal for the piranhas in the opening and horror master Eli Roth gets his come upons.

At 88 minutes long ‘Piranha’ is a fast moving gory delight. High on stupidity but you can’t help enjoy yourself.