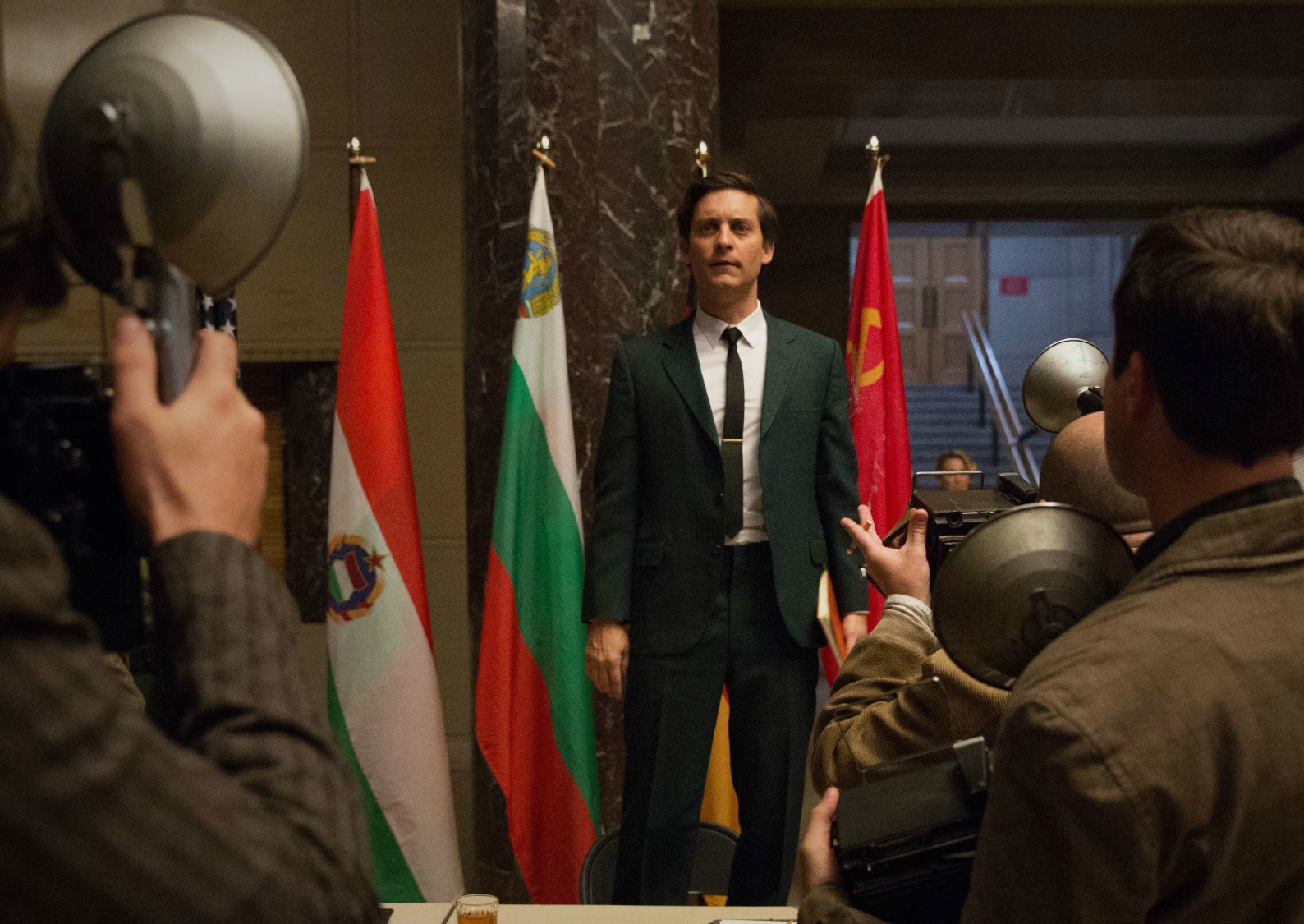 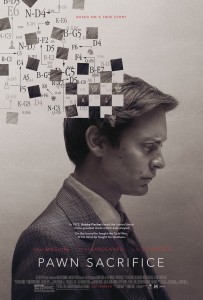 From the opening frames it is clear that Pawn Sacrifice looks to analyze and discuss the psychology of this young man who would become the worlds greatest chess player. From a screenplay written by Steven Knight (Locke) and directed by Ed Zwick (The Last Samurai, Blood Diamond) we are introduced first thing to an eight year-old Bobby Fischer (Aiden Lovecamp) in Brooklyn who is already being positioned by his Russian mother, Regina (Robin Weigert), to look out the windows for spies and people who might be on the trail of her cause. Apparently she is some type of activist as she’s already had her son and daughter, Joan (Sophie Nélisse of The Book Thief), rehearse what they are to say if someone asks them about her. It is an initial state of fear and suspicion that Bobby seems to never be able to shake. The fact he is to become the most famous chess player in the world, used as something of a pawn himself in the political dealings between the U.S. and the Soviet Union during the Cold War, only intensifies this paranoia that causes his mental health to fall apart faster than a watermelon in the hands of Gallagher. Of course, what has to be considered is how much this nurturing state and how much Fischer’s love for chess both influenced his eventual mental state. By the time Fischer was twelve years-old (Seamus Davey-Fitzpatrick) in 1955 he was already something of a prodigy, the U.S. chess champion as well as already beginning to push his mother, and almost everyone else, out of his life. The basis for who he would become was already there, but this inability to separate the game of chess from his identity and thus the the inability to look at the world any different than he would a chess board somewhat forced Fischer to succumb to the tone of the game and live his life in that timbre. Needless to say, this constant state of delusion becomes taxing on both Fischer and those around him, but dammit if it isn’t fascinating to see unfold through the glass door.

By the time the film reaches 1962 (at which point the real Fischer would have been nineteen) Tobey Maguire has taken over the role. After the Russians ultimately failed to meet his expectations in a tournament that would crown him World Champion he forced himself into something of seclusion for three years before being approached by lawyer, Paul Marshall (Michael Stuhlbarg). Marshall, an alluded to government operative of some sort, hoped that Fischer might consider facing world champion, Boris Spassky (Liev Schreiber), of the USSR so as to bring the Cold War confrontation down to a simpler level. Fischer agreed under certain conditions including one that placed Father Bill Lombardy (Peter Sarsgaard) as his second. When Fischer eventually faced off against Spassky he quickly deduced his competitor was playing for the draw and if there was one thing Bobby Fischer didn’t do-it was play to draw. Fischer more or less shot himself in the foot and lost to Spassky as he’d rather do that than draw only to return two years later to begin the road to the World Championships where he would again inevitably face Spassky once he reached the top. While there have been features and documentaries concerning Bobby Fischer before (Searching for Bobby Fischer, Bobby Fischer Against the World), Pawn Sacrifice is more or less the first scripted narrative that attempts to take on the core years of the chess prodigy’s life and take a wide look at this man’s life the way a traditional biopic might. This is also the downfall of the film as the whole thing does feel rather traditional-and if you already know the story of Fischer, rather predictable. Still, the film has plenty of peaks to go with these obvious valleys as Maguire was somewhat born to play this role and that the film cares enough to go deeper than surface level with it’s subject is inspiring and ultimately what makes the film worth investing in. That is, the investigation into Fischer’s psyche.

I specifically say investing in because never do Zwick, Knight or anyone else on the creative team attempt to make Fischer an appealing guy we might feel any kind of sympathy for. In fact, the more the film goes on and the more Maguire’s Fischer becomes concerned and suspicious of the possibilities of what could be happening around him the more we grow weary of him. There were more than a few times that I wanted to yell at the screen telling Fischer to just, “play the damn game!”, but obviously that would only mean Fischer’s mentality was really making an impression on me, truly affecting me as an audience member and I guess that would be considered a good thing as we typically are impressed when a film is strong enough to elicit an emotional response. Granted, this wasn’t necessarily a positive emotional response, but it was the appropriate response to Fischer that the film conveyed those around him at the time were dealing with as well. As Fischer, Maguire is supposed to inhabit this tedious, arrogant and inconsiderate persona and while he definitely hits each of these nails on the head in different scenes what is really spectacular is the moment of epiphany we have late in the film where we realize just how good he is at embodying this man and his corrupted state of mind. This aspect of Maguire’s performance is done in a kind of symmetry with how Zwick builds the tension and intrigue around the chess games themselves. How does one dramatize chess? Well, Zwick takes the approach of never actually showing Fischer play a game or anyone play a game for that matter once Maguire takes over the role and up until Fischer faces off against Spassky on July 11, 1972. This technique makes these showdowns between Spassky and Fischer all the more tense and all the more loaded given all that Zwick and Knight have put in place prior. It is a real culmination of all the pieces that have been pushed into play, making those scenes where Fischer studied the moves and styles of his opponents and goes over techniques with Lombardy in their hotel rooms all the more meaningful and all the more extraordinary in the level of dedication committed.

At one point in the film Lombardy tells a story of another chess player who shared a similar fate as Fischer. What is interesting here is that Spassky, despite being the World Champion for what seems like a solid amount of time, never fell into this kind of entrapment by the game of chess. While Schreiber is often given little more to do than get in and out of vehicles or off and on planes Spassky becomes something of a model chess player that we tend to want to root for given Fischer’s madness begins to look like a play to avoid the inevitable. That Spassky graciously bends to some of Fischer’s more ludicrous demands shows he is an honorable sport and of a sound mind. While his is likely a less interesting dramatic story, he is the guy you end up taking a liking to over our intended protagonist. Lombardy is another kid, like Fischer, who grew up in the boroughs and even beat Spassky when they were younger. As Lombardy, Sarsgaard is our bridge between the paranoid mess that Fischer eventually becomes and the real world of the audience that is searching to find some sanity or understanding in Fischer’s irrational actions and outrageous demands. Maguire plays this schizophrenic personality as someone who doesn’t understand that the world doesn’t bend to his every whim. Fischer comes off as a man who feels the world owes him a thousand favors because he’s a genius at a game. He is an aggressive personality that can only be cajoled to do something by those he considers worthy of his stature and even then he still ignores three phone calls from President Nixon. It is in these final, tension-filled moments between Fischer and Spassky that Zwick turns the tables and while not necessarily endearing the audience to Fischer makes us realize the genius of his insanity. With so many possibilities (after only four moves, there’s more than 300 billion options to consider) how does one even comprehend thinking ahead as many moves as Fischer seems to have figure out in his head? It is in this instance, this true crest of everything the movie has been working towards that we not only buy into Fischer’s fractured mind, but buy Pawn Sacrifice as a spiritual portrait of that mind.