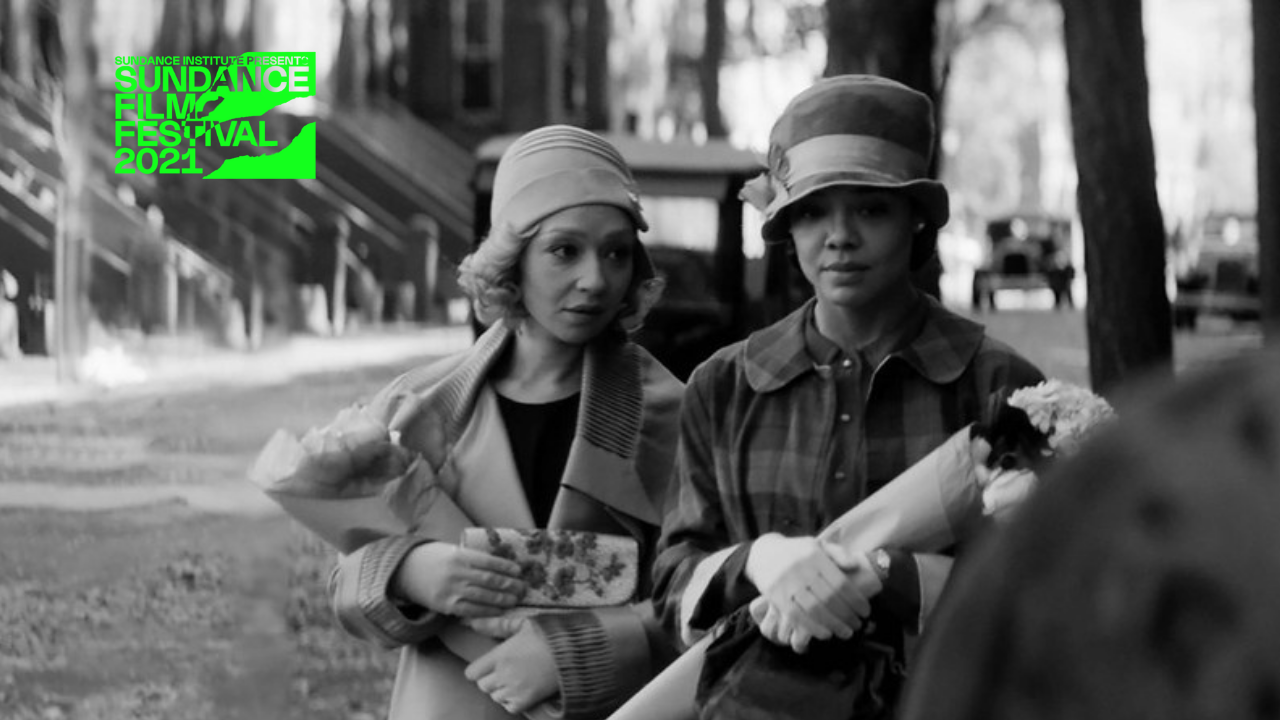 Rebecca Hall’s directorial debut adapts Nella Larsen’s seminal 1929 Harlem Renaissance novel, Passing, a tale of two bi-racial women who pass for white but end up on different sides of the colour line. Delving into race, gender and sexuality, this is an ambitious first outing that benefits from note-perfect casting.

As she navigates the toy store purchasing a present for her son, Irene (Tessa Thompson) picks up a “pickaninny” doll two white women have accidentally dropped and hands it back to them. Neither recognises her to be a black woman, yet as she speaks to the cashier she tentatively conceals her face under her hat. Upon exiting and making her way to a tea room, she notices a blonde-haired white woman staring at her. The woman advances closer, revealing herself to be Clare Kendry Bellew (Ruth Negga), a fellow bi-racial woman who also passes as white. Irene and Clare were old friends who haven’t seen each other in 12 years and as they catch up the differing paths of their lives becomes apparent. Clare boldly proclaims her existence amongst the white society who have no idea of her heritage – including her husband, detailing her relief that her daughter didn’t “turn out dark”. Irene shares that her children are in fact dark, as is her husband and is altogether perturbed at the idea of erasing one’s identity in such a way as Clare has. The tone changes further as Clare’s husband (Alexander Skarsgård) arrives. Addressing his wife as ‘Nig’ and delightfully telling Irene of his hatred for black people, it’s an exchange that impacts both women.

In the days following, Irene ignores Clare’s efforts to communicate until she shows up on her doorstep and begins to forcefully ingratiate herself into the lives of both Irene and her husband Brian (Andre Holland). Undoubtedly, Passing’s biggest strength is in casting both Thompson and Negga, two actresses who never for a second deliver less than the impeccable level of skill we’ve come to expect from them. Clare admits that she longs for the black community she had to leave behind in order to pass and prosper among white people. Through Irene, she has a way back to finding that part of herself and gaining the racial and social fluidity she’s long desired, albeit with Irene’s constant warnings of the danger of being found in the neighbourhood. Negga lights up each scene with a charming, effervescent air, drawing in those around her and sitting comfortably with their attention in her palm.

Thompson is brilliantly measured by comparison as Irene, who feels secure and happy living her authentic identity. Yet this assurance begins to erode the more Clare infiltrates her life and it becomes more apparent to both the audience and Irene herself that she feels trapped and resentful of her former friend. Thompson and Negga make light work of balancing the admiration and envy that exists between the two women, as well as the unspoken sexual chemistry that seeps through small hand touches and lingering kisses on the cheek.

Despite Thompson and Negga doing their best to elevate the material, the emotional resonance of the story doesn’t quite come through. For all the push and pull between the women, it never seems to reach an interesting place that pulls the audience in and makes them invested in the outcome. Hall makes welcome visual choices, including shooting in elegant black and white and using a 4:3 aspect ratio to heighten tension, yet without a script to take the simmering feelings of the characters and express them in a way that feels meaningful, these stylistic choices feel like a poor stand-in for a real connection. Heavy-handed scenes such as Irene holding a boiling teapot in shaking hands before promptly dropping it in front of Clare, and musical refrains that soon feel repetitive prevent the audience from truly buying into all the nuance of the story Hall is keen to highlight.

Questions around race and identity are rarely answered easily, or satisfactorily, and Hall deserves credit for her bold decision making while tackling this topic. However, in failing to engage the audience beyond aesthetics, Passing becomes a textbook example of style over substance, made even more frustrating given its supremely talented cast.