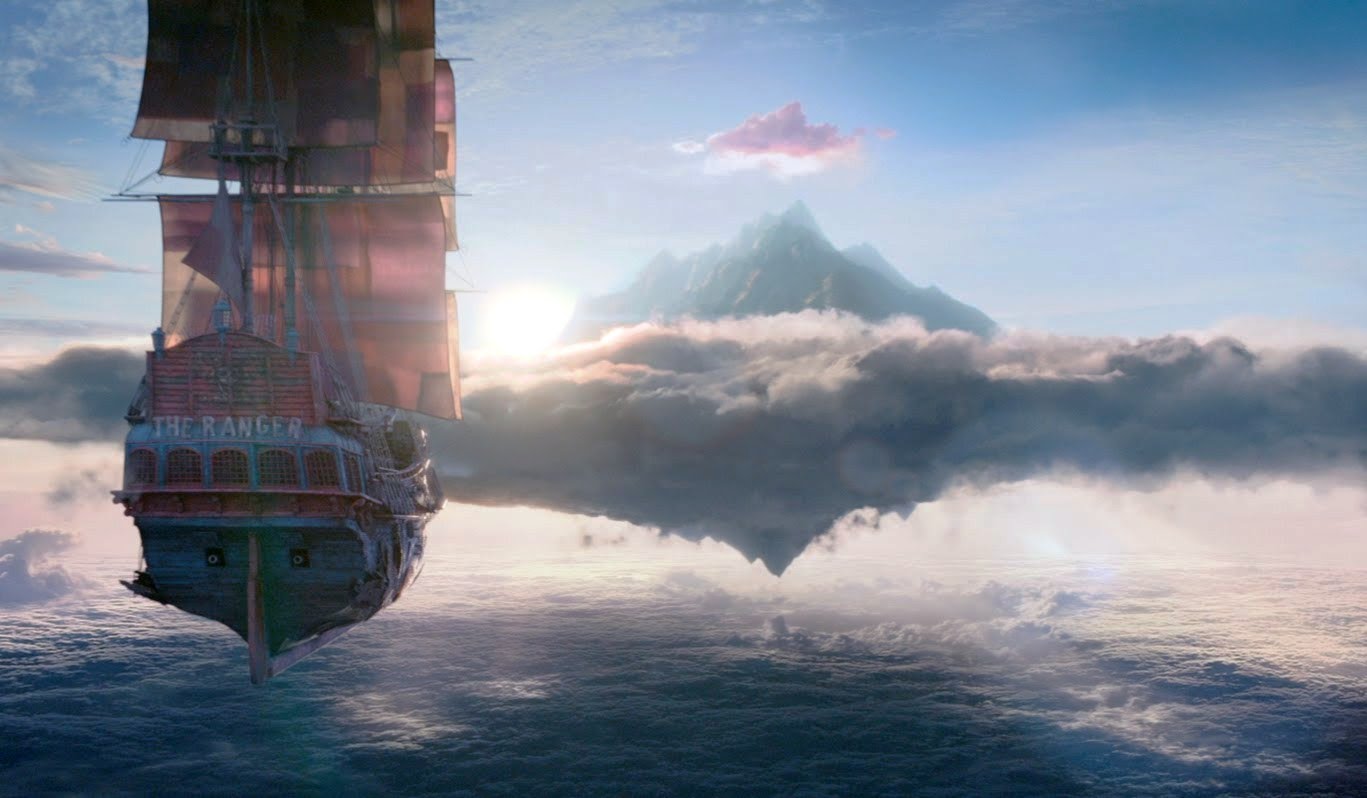 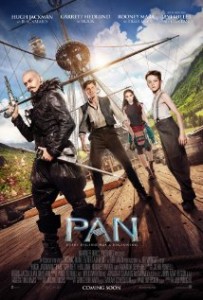 Left on the doorstep of an orphanage not long after his birth, Peter (Levi Miller) is raised under the harsh care of nuns. Peter and his buddy Nibs (Lewis MacDougall) noticed some of their fellow orphans have disappeared recently. The nuns tell them the other boys have been adopted but Peter and Nibs don’t believe it. They hide one night after everyone has gone to bed to see what’s going on but don’t notice anything and decide to go to bed. Just after they lay down, men on ropes drop through the ceiling grab boys and pull them through the roof. Peter and Nibs are also grabbed by the men who are pirates in a flying ship. Nibs is able to escape but Peter is afraid of heights and won’t jump off the ship onto the roof. The ship has to evade British fighter planes as World War II is going on and eventually ends up in what looks like a giant hole in the ground. Peter learns he is in a place called Neverland and is a prisoner of a pirate named Blackbeard (Hugh Jackman). The hole is a mine where thousands of boys and men are digging for fairy dust, also called pixum. Peter talks with another miner named James Hook (Garrett Hedlund) about what’s going on; but Hook doesn’t want to be anyone’s friend. Peter finds a piece of pixum that is immediately stolen by an adult. When a mine manager intervenes, Peter is accused of making a false accusation about the adult and is scheduled to be judged and punished. Blackbeard lets the crowd decide and they choose for Peter to die. Blackbeard pushes Peter off a plank and he falls hundreds of feet but stops just before hitting the ground and floats for a few seconds before landing. Blackbeard tells Peter about a Neverland legend of a boy that can fly and will lead a rebellion against him. Landing in prison, Peter is soon joined by Hook in the next cell. Hook has snuck in a blasting cap and breaks them both out of prison. Getting help from another mine
manager named Sam Smiegel (Adeel Akhtar), the three commandeer a ship and fly into the forest where they are found by the natives lead by Tiger Lily (Rooney Mara). Learning that Peter is possibly the fulfillment of the prophecy, Tiger Lily’s people agree to help Peter if he can prove he can fly in the next three days.

“Pan” is obviously the first film of a franchise. The story arc seems to be establishing the friendship between Peter and Hook in the first film that is strained in the second film and is completely shattered in the third when Hook loses his hand to the crocodile and blames Peter for it. It seems like an attempt to wring more money from a story that has been told in various ways since the debut of the J.M. Berrie play in 1904. Unless foreign markets fall in love with the movie the other two films won’t be made as “Pan” is tanking at the box office. Perhaps if they had made a better movie Warner Brothers wouldn’t be looking at taking a huge loss and there would be a couple more fantasy films on the horizon.

The creators of “Pan” make some odd choices in building the world of Neverland. First, while Hugh Jackman is working hard through lots of makeup and flowery dialog, he spends a great deal of time on screen accomplishing nothing. In his early appearances, Blackbeard is leading a giant singalong of Nirvana’s “Smells Like Teen Spirit,” which is certainly weird enough considering the film is set in the early 1940’s, and giving a pep talk that is almost immediately contradicted by his actions, yet he seems to have the undying approval and support of everyone in the mine. Nothing in the early parts of the film set in Neverland makes a great deal of sense and it doesn’t get much better as the film goes along.

While the movie is visually stunning (even in the 2D version I saw) “Pan” stumbles anytime any character speaks. Garrett Hedlund’s James Hook sounds and looks much more like a cowboy than a future pirate. Rooney Mara was apparently told to play Tiger Lily as bland and vacant as possible. During her fighting scenes Mara appears to be on autopilot. Even young Levi Miller, who gives a perfectly fine performance, is hamstrung at times with odd emotional responses and a lack of clear direction of his character’s evolution.

“Pan” should have some big emotional moments as the core of the story is about an abandoned little boy searching a strange land for his long-missing mother. Instead of heart and feeling, “Pan” is stuffed full of special effects and big action set pieces designed to keep our attention away from the story’s shortcomings and attempt to dazzle the audience into forgiving all the scripts faults. It doesn’t work. There are at least two moments when I should have shed some tears for this poor little boy. Instead, I gotflying pirate ships, bouncing warriors, bony birds, huge crocodiles and massive crystal caves. All of these visual treats are appreciated but they should have been surrounded by a story that made me feel something…anything. Instead, all I felt when the credits started rolling was relief.

“Pan” is rated PG for language, fantasy action violence and some thematic material. There are numerous battle sequences and fights. Some characters are shown being shot and bursting in a cloud of brightly colored powder. The idea of parental abandonment and child abduction might trouble younger viewers. There is also a death that is handled in a fantasy setting that could be troubling as well. Language is very mild.

It could have kicked off a very lucrative film series; but “Pan” will likely go down as a giant money pit. If the studio had taken as much care with the script as they did with the visual effects, they might have succeeded in creating a film both beautiful to look at and meaningful to watch. As it is, they got it about half right. The script is such a mess it even contradicts itself involving a major portion of the plot. It boggles my mind that so many people can work so hard on a movie, all with the intension of creating something good, yet manage to screw it up so royally. While not a catastrophe on the scale of Fox Studio’s “Fantastic Four,” “Pan” is certainly an opportunity missed by a wide margin.