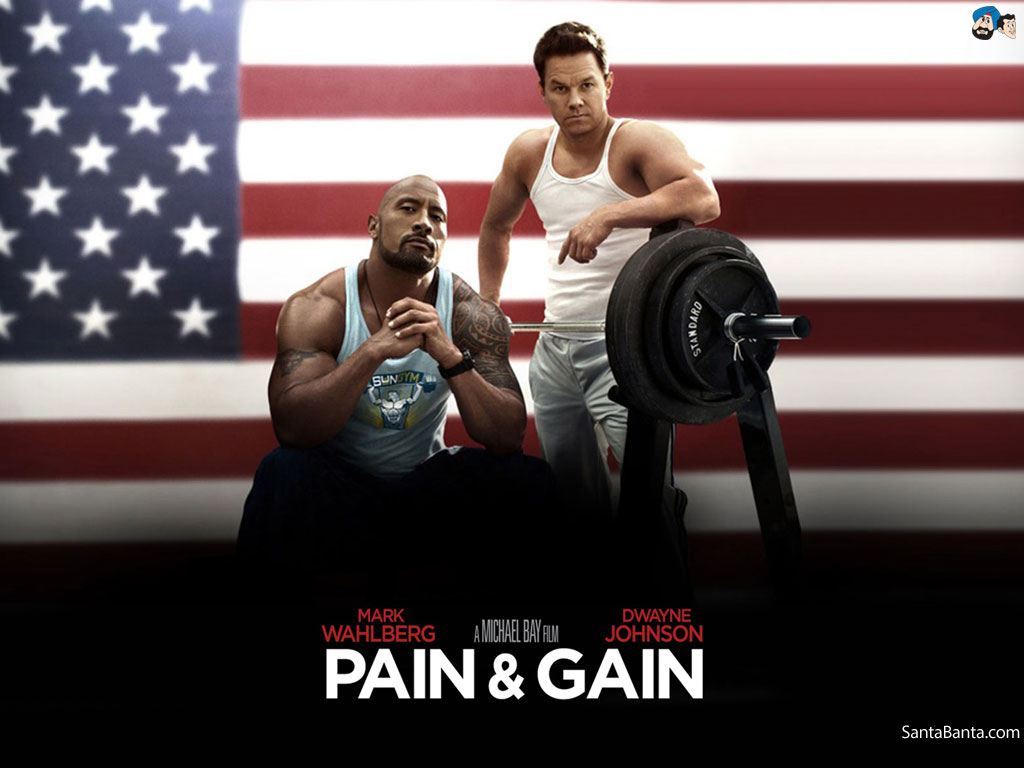 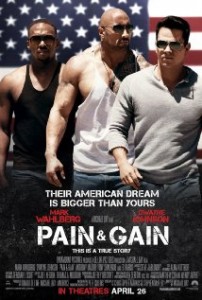 I’ve never been on the Michael Bay bashing train and certainly don’t plan to start now as his latest, “smaller” film is likely the most interesting piece of work he will ever put to film. Interesting being the key word here as the story Bay has chosen to recount is one of the most outlandish and absurd truths that has also likely even been put to film. I have been highly anticipating Pain & Gain if not for the chance to see the now solidified movie star of Mark Wahlberg make his next move as well as watching Dwayne “The Rock” Johnson continue to skyrocket towards superstar status, but for the opportunity to see Bay stretch his visual (and maybe even storytelling) muscles with something other than big CGI robots. It has been nearly six years since the first Transformers film and in the time that Bay has delivered two sequels he has also had the growing ambition for this kind of passion project and that comes through in the execution and style with which Pain & Gain is delivered. There have already been some pretty heavy accusations and criticisms of the film thrown out and while I can understand where some of these are coming from in regards to the family of the deceased feeling this is making light of their family members deaths, the film certainly isn’t glorifying the main characters and if anything, the source of the comedy comes from how stupid and incompetent these lead protagonists are in their dim-witted schemes. There are plenty of words being thrown around like homophobic or misogynistic to describe the director and his film yet it has always been clear the world these characters lived in was a world of strippers and bodybuilders who’d do anything for their physique yet likely oppose anything even the least bit gay. Those complaints are rendered mute by the fact those attributes are what create the atmosphere and the actions of the characters are so off-putting and the story so strange that it is also becomes extremely engaging.

Based on a series of articles written by Pete Collins for the Miami Sun Times in 1999 Pain & Gain tells the story of one, Daniel Lugo (Wahlberg) a dedicated bodybuilder with a rocky past and big aspirations for his future. Lugo is all about physique (he repeats himself many times saying how much he believes in fitness) and while he’s convinced the owner of Sun Gym, John Mese (Rob Corddry) that he can turn the place around and triple his membership in just a few short months Lugo doesn’t plan on spending the next twenty years of his life going to work in sweatpants. When he meets hard to like client Victor Kershaw (Tony Shalhoub) who talks about how he is a self-made man and how much money he has and how much extra he has stashed in off shore accounts in the Cayman Islands it infuriates Lugo to the point he rounds up his best friend at the gym Adrian Doorball (Anthony Mackie) and a fresh out of prison Paul Doyle (Johnson) and decides to teach the guy a lesson while making themselves rich by forcing Kershaw to sign over everything he has to them. While so far that may sound like a regular crime caper it is the attention to detail that make the story come alive. I initially wanted to read the Collins article before going into the film, but felt that might end up making the movie less enjoyable and that I’d still be able to compare the stories afterward. Having now both seen the film and followed it up by reading the articles based on interviews with the principal characters, court documents, and investigative reports of these real life events it is truly mind-blowing how many of the little details I fully expected to be added for a laugh or for dramatic effect came straight out from the lines of the news story. Whether it be the born again Christian who owned the Spy Shop in downtown Miami where beneath large banners reading “Jesus Saves” and “God Is Love,” these guys were able to purchase merchandise designed to shock, incapacitate, imprison, and eavesdrop on their fellow man or the simple fact it did actually take the protagonists several attempts to even kidnap Kershaw in the first place.

And while the film is evidently a Michael Bay production from the way it’s shot utilizing an extreme amount of dutch camera angles and a color palette so saturated in bright oranges and yellows with the lighting always perfectly placed to create the sun-tinged lens flares there is also plenty of subtext here about the American dream and what it means in image and what it means to earn it. There are certainly similarities here to Harmony Korine’s Spring Breakers in theme as it makes a statement about that train of thought of how living in this country, being a citizen alone should earn you the right to be wealthy and have a family that you can barbecue for on weekend afternoons and even mow your own lawn, albeit on the most expensive top-of-the-line riding mower there is. What Pain & Gain serves to do is poke holes in the idea that such successes will come without honest work and education, that they will come by grabbing the guy closest to you who has what you want and taking it from him because you hate him for having it and you hate even more that you don’t. It is all re-enforced by the way Lugo keeps telling himself that he is a doer and motivates himself to justify the means to his end that he only feels is justified by how good he looks, how fit he is, and how smart he thinks he is. With that body he shouldn’t have to pay bills, he shouldn’t have to worry about such petty things, but instead people should look to him as a beacon of light and grant him that instant gratification. When the lifestyle doesn’t meet the look though Lugo and Doorball will do whatever it takes to fulfill what they feel they so rightly deserve, what their country has promised them in the form of TV ads and movie images. They live to accomplish a fantasy and the movie, better than anything else it does, is convey this idea that there are no lengths these men won’t ultimately go to in order to to live out their dream, no matter how short-lived it turns out to be.

Coming back around to the magic in the details, the little character quips, the mid-90’s clothing, the song choices, and the all-around entertainment value of the performances enhance this caper/deranged morality tale to a level that had me consistently engaged despite the fact the film could have shaved about twenty or so minutes from its total running time to make it as equally as lean and relentless as its main characters. If there is any universal reason to offer as to why everyone should at least give Pain & Gain a shot though it would be for the performance that Dwayne Johnson gives. As a Jesus freak coke head who is constantly wrestling with his desires and his actions, his lifestyle and his final judgement the man turns in a hilariously odd performance that in some strange way makes it all reasonable despite the fact it is completely contradicts itself time and time again. Wahlberg is committed and beefed up here and as the anchor for the more serious side of the film he holds his own well. This is a perfect vehicle for his talents and he takes full advantage of it that, while not giving the scene-stealing performance Johnson does, makes us believe in the ambitions of the man even though we really can’t stand the guy. And the film doesn’t encourage us or try to make us like these guys, they simply lay out what they did and how they went about it. It is in the revelation of how stupidly these guys went about doing these unforgivable things that the attribute of absurdity finds its way in and gives the film that clown with a sad face tone that I think balances the truth of what these guys did with the way in which the bizarre aspects of the story lend themselves to why it is funny now even if it might not have been considered so under the actual circumstances. That they chose to handle things in such a way and think they could get away with it forever is where the comedy comes from and no matter how bad of a rap Bay gets I believe he understands that and he had more in mind here than simply showing a story with strippers and bodybuilders but one that showed a jaded view of that American dream.
Related Topics:Anthony MackieDwayne JohnsonKidnappingMark WahlbergMichael BayReviewReviewsSportThe Rock
Up Next