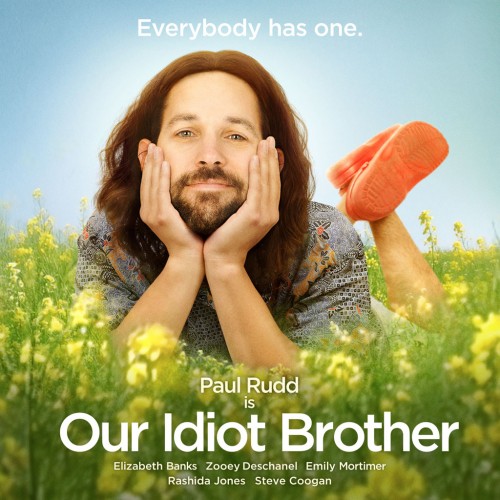 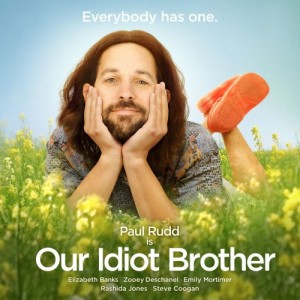 I wasn’t a huge fan of Paul Rudd’s take on the awkward guy inI Love You, Man, so I was a bit worried he’d have to stick to his sarcastic cynic routine to entertain me. Our Idiot Brother was a shock on a number of levels, and since Rudd’s the star, he deserves the first shout out. He’s not only funny, but manages to portray one of the nicest men in film history without being clichéd, annoying, or anything other than extremely convincing. He is delightful.

Rudd plays Ned, an all around great guy. He looks for the good in every situation, which often gets him into trouble. You can’t please everyone after all. His abrupt insertion into his three sisters’ lives presents many problems for the family because Ned’s kindness has the tendency to ironically backfire.

Thankfully, the movie is careful never to drift into camp. Ned’s naïve, but not forehead-slappingly so. I don’t know if I should credit Rudd or the screenplay, but I like not having to suspend my belief, especially while watching a funny movie. This leads me to another point: this isn’t exactly a care-free comedy as the trailers or the film’s own title may suggest. It deals with some relatively serious themes, and could be classified as “dramatic” at times.  This may spell trouble for God-fearing people looking for a stoner flick that doesn’t take itself seriously.

The performances are all worthy of individual praise, and it’s a big cast. Elizabeth Banks plays a controlling Type-A personality, and probably has the most entertaining interactions with Rudd just by character juxtaposition. There’s not a weak performance in the bunch though. Zooey Deschanel and Emily Mortimer are Ned’s two other sisters alongside Banks, and both lend their talents to complex roles. I also hadn’t seen much from T.J. Miller before the movie, but he was hilarious as another laid back farmer dude.

I’m worried such a well acted, insightful movie won’t get the box office numbers or critical recognition it deserves—there were about twelve other people in the theater on the opening Saturday night. My hope is that this review will not only get you out there to see Our Idiot Brother, but also single handedly inspire world peace.

One Flew Over The Cuckoo’s Nest