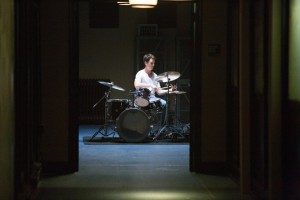 As a professional classical musician, I am always supportive of films that focus on classical music and music performance. Even though many of these films historically have problematic elements, including the obvious inability to play the instrument and the over-dramatization of the musical sphere, I am willing to put aside these somewhat minor offences in sake of the message of the film, which typically speaks to the heart and spirit of music. I will be the first to criticize the problems in Whiplash, but the message at its heart is refreshingly genuine and surprisingly helpful.

Films about classical music, or jazz, in Whiplash’s case, have a hefty responsibility separate from the already burdensome aesthetic tasks of storytelling. Filmmakers have the opportunity to inspire audiences to experience a new or unfamiliar genre of music. In today’s current musical climate, jazz, to a certain extent, and classical music are in trouble. Just watch a broadcast of the Grammys to see what music genres are important to the masses. By no means am I advocating that Hollywood should make films solely to promote classical music, but when they are inspired to do so, there is power in their hands. A great example is Amadeus (1984), the Academy Award-winning film based on a play, which depicts the life and work of composer Amadeus Mozart. Whether you listen to classical music or not, you know the name Mozart; his name stands alongside the many geniuses of history. The film educated many people about Mozart and his work. Sure, there are plenty of inaccuracies and creative licenses on the storytelling, but the film successfully fleshes out Mozart as a relatable character. Because of this, people sought out his music: over 200,000 copies of theAmadeus soundtrack were sold, a dramatic response to a classical music film. This is absolutely an encouraging figure for my community, and Whiplash is having similar success. Right now, the soundtrack is rated 4.5 out of 5 stars on both iTunes and Amazon.com, which shows solid fervor for the music. The film’s story moved people enough to explore the music outside of the film, and, what is more important, it may encourage people to further explore jazz.

Initially, I thought Whiplash would be a hipper and more modern take on Mr. Holland’s Opus, using a personality on the completely opposite end of the teaching spectrum to motivate music students. In Mr. Holland’s Opus, Richard Dreyfuss plays Glenn Holland, a deeply caring high school teacher who uses positive reinforcement and kindness to motivate his students. The film shows that with supportive guidance, even the least talented students can attain success. In Whiplash, JK Simmons plays Terrence Fletcher, a brutal college jazz professor whose teaching style is based on fear. He mentally beats students down to a pulp in order to motivate them to the next level. I expected Whiplash and Mr. Holland’s Opus to use different means to the same end: from Fletcher’s cruelty and Holland’s patience will come high musical results. There is where the two films deviate. Whiplash focuses more on the student than on the teacher, following the destructive journey of young drummer Andrew, played by Miles Teller.

Andrew is a freshman in the esteemed Shaffer Conservatory in New York. His goal is to be one of the greats, a legendary jazz drummer. At the beginning of the film, he seems like a normal college music student. He practices late in the night. He constantly listens to recordings of his favorite jazz legends. Even dumping his girlfriend so that he can focus on his craft free from distractions, while extreme to many, still makes sense. But his obsession begins to take over. In order to master an extremely fast drumming pattern, he spends hours practicing, night after night, to the point where his hands are bleeding onto his drums. That is completely unrealistic. Firstly, his reaction to not playing fast enough is to tense up and force. A fundamental musical concept is that in order to go faster, you must lighten up and make smaller movements. If the filmmakers are making that moment as the epitome of sacrifice for one’s art, it is promoting extremely bad habits. Because this film takes place at a prestigious conservatory, it is safe to assume that Andrew would have a private lesson teacher, and his teacher would not allow that. Practicing hours a day, night after night, is almost normal, but every artist, whether in music, dance, or theater, knows that forcing your body into painful territory is a recipe for a short career. If Andrew keeps this sort of practice regiment up, his body will not be able to last very long after school. Music is all about efficiency. Secondly, Whiplash ends up portraying the experiences of an obsessive personality, not the experiences of a normal music student or a musical genius. It is one thing to show intense and invigorating artistic work, but it is an entirely different thing to glorify destructive work. His obsession culminates when he stumbles to a performance after suffering a car accident. There is no question that Fletcher’s teaching style is abusive and hurtful, but when that style is applied to an obsessive personality like Andrew’s, it could be deadly.

Despite Fletcher’s apparent madness, there is rationality at his core. “There are no two words in the English language more harmful than ‘good job’.” There is truth to that. Many become complacent when praised with “good job”. They may settle and think they are good enough to get by with what they have. His entire professional life has been founded on pushing people past that complacency. That is a noble cause, but his actions are less than noble. He wants to inspire students to become legends, and he does not want any students under his tutelage to miss out on greatness because he let them settle — but despite all his efforts, none of his students ever got to that level. If anything, he may have hindered them. That must be an incredibly bleak realization. That is why the final scene in the film is so fantastic. Fletcher and Andrew are two opposing forces. Fletcher wants to get back at Andrew and visa-versa, and they commence a musical duel on stage at a jazz festival. After a while though, as Andrew begins passionately playing, the music takes over. Their battle is blurred for a moment, as they realize that what they are engaged in is what they have been searching for all along. Andrew has always wanted to play an extraordinary performance and Fletcher has always wanted to inspire and cultivate great talent. During this incredible performance, the looks on their faces change, particularly on Fletcher. He starts off giving Andrew smug smirks as he embarrasses him. Then his countenance changes to anger and confusion as Andrew boggarts the performance. Then, remarkably, his expression turns into excitement as he influences Andrew’s solo. It is in this moment that you witness the magic of Whiplash: the power of music trumps all.

Whiplash, a film about jazz, was an unlikely source of inspiration for me, personally. I can testify to the truth in Fletcher’s words: “There are no two words in the English language more harmful than ‘good job’.” Outside school, artists everywhere have to be their own teachers, pushing themselves to get better. Sometimes, you find yourself letting things slip, becoming OK with certain imperfections, believing that things will fix themselves in time. After I saw Whiplash, I sat down to practice, and I heard Fletcher’s words in my head. Even warming up, I had become satisfied with what I was doing, but I told myself that I could do better. And I did. I did not want to settle, and ever since, my playing has improved. It’s incredible how unconsciously complacent I was with my art. Now, I didn’t need a psychopath belittling me in front of my colleagues to get my head in the game. His words gave me just the push I needed to stay on course.

Facing Fear Itself – The Terminator