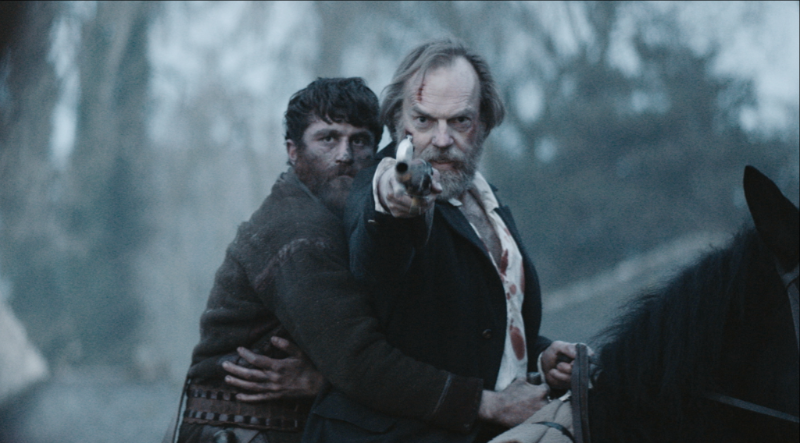 The official trailer for the Irish feature film BLACK 47 directed by Lance Daly (Kisses, Life’s A Breeze) has been released by Wildcard Distribution. The film will go on release in the Republic of Ireland and Northern Ireland from Wednesday 5th September. Altitude will release the film in Mainland Britain on 28th September

The action film, which closed the recent Galway Film Fleadh to great acclaim, is set during the Great Irish Famine and stars Hugo Weaving (Hacksaw Ridge, The Lord of the Rings, The Matrix), Jim Broadbent (Oscar®winner for Iris) and the prolific Irish screen and stage actor Stephen Rea (The Crying Game, Michael Collins). Joining them are rising international actors James Frecheville (Animal Kingdom, The Drop) and Freddie Fox (King Arthur: Legend of the Sword) along with a strong young Irish cast including Barry Keoghan (Dunkirk, The Killing of a Sacred Deer), Moe Dunford (Michael Inside, Patrick’s Day) and Sarah Greene (Noble, Penny Dreadful).

It’s 1847 and Ireland is in the grip of the Great Famine that has ravaged the country for two long years. Feeney, a hardened Irish Ranger who has been fighting for the British Army abroad, abandons his post to return home and reunite with his family.  He’s seen more than his share of horrors, but nothing prepares him for the famine’s hopeless destruction of his homeland that has brutalised his people and where there seems to be no law and order. He discovers his mother starved to death and his brother hanged by the brutal hand of the English. With little else to live for, he sets a destructive path to avenge his family.

Altitude will be releasing BLACK 47 in mainland Britain from 28th September.

Wildcard will be releasing BLACK 47 in Ireland from Wednesday 5th September.

Tom Hardy Stars in the Latest Trailer for ‘Venom’