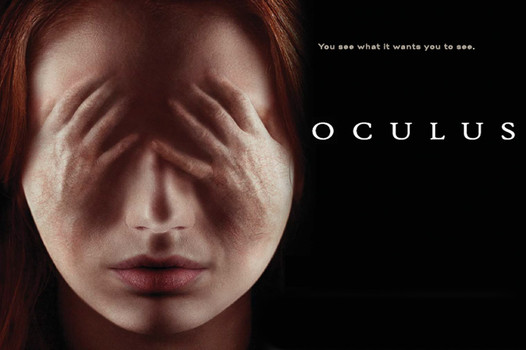 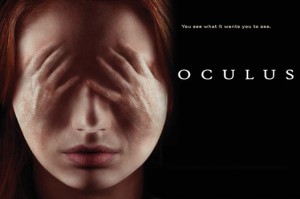 From its opening scene, it becomes apparent Oculus is of a very sinister tone—one that continues until the film’s shocking climactic finale. It is, at its core, a story about a brother and sister and the dark events of their youth that continue to haunt them. The film progresses slowly but develops with such intensity that when it is over, it is difficult to process the story as a whole.

Perhaps this is why many viewers are divided on whether, as a whole, Oculus is a good horror film. Comparisons may include Insidious and The Conjuring. However, Oculus is highly successful in originality by its well-executed style of filmmaking. By style, I mean the manner in which two storylines—a decade apart—with the same characters at their respective ages, are shown in the film. The stories eventually begin to intertwine, as do the characters. Confused yet?

Kaylie and Tim are siblings who viewed the brutal murder of their mother by their father and dealt with it in separate ways after the murder. Tim was sent to a mental facility for 11 years due to the events that occurred the night of the murder, while Kaylie lived a more normal, working life. Upon turning 21, Tim is picked up by Kaylie from the facility for now being sane of mind. She soon reveals to him that she has been investigating murders that have occurred in the past in connection to a mirror that hung in their home in their youth, and of course, she connects it to the death of their parents. While she believes the mirror possesses a demonically malignant presence, her brother is convinced their father killed their mother in a fit of psychological mania. Kaylie, of course, thinks he’s been brainwashed by shrinks.

Kaylie then reveals that she is conducting a recorded experiment by which she can prove the mirror holds supernatural abilities. As her project continues, both her and her brother become entranced or even possessed by the mirror and have difficulty differentiating reality from fiction. Now, cut to a scene of the siblings a decade earlier, moving into their house with their parents and putting up the same mirror in the same spot. The mirror has the same tendency for torment in the past as it does in the present.

As the two storylines come together, so do their violently gripping finales, all swirled into the same physical locations—this is accomplished by the fact that both storylines take place at the same home and with the intertwined use of both older and younger Kaylie and Tim.

Despite its cliché jump-scares and complicated storytelling, Oculus is a beautifully stylistic and sinister tale with a fervent build in tension. It is thoughtful and requires attention and reflection, a metaphor perhaps to the mirror itself. While I highly enjoyed this film, it exists primarily for the horrific enjoyment of genre fans.