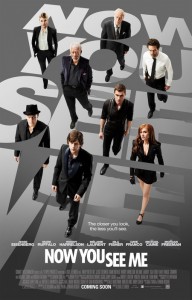 As the films mantra goes, the closer you look the less you see, but if you are going to enjoy this film it is a wise decision to do exactly the opposite. There is no need to investigate or inspect each and every twist and turn this film throws at you because there are bound to be holes. No, in fact what is best to do in order to enjoy Now You See Me is to simply sit back and take it in for what it is: pure, escapist cinema that delivers a relentlessly fun and entertaining ride that speeds by and leaves you satisfied when the credits begin to roll. Kudos to this movie for being able to stand on its own two feet in a season where every Friday is dominated by a sequel or spin off or re-make or something that is a familiar product that is sure to find an audience somewhere.Now You See Me is a completely original film in the midst of big studio fare that has the star power, the concept, and the appeal to win over those movie-goers who aren’t just looking for an escape from the real world, but from the saturated sci-fi superhero adventure genres that are playing on every other screen. That is not to say I don’t enjoy those kinds of movies as well and this year has been particularly good so far in terms of summer popcorn entertainment, but simply knowing going into this film that we are up for a fun ride that takes a subject that’s commonly considered nerdy, such as magic, and combines it with the formula of a heist film to create something imaginative and fresh is indeed refreshing. Though there are certainly plot holes to be picked apart once people have the ability to re-watch the film several times, upon first viewing this is nothing more than a caper of a good time that has an incredibly strong cast each member of which is doing what they do best, churning out some solid and genuine laughs while balancing the never-serious tone with a fair amount of action and mystery that is compelling and keeps you guessing until the very end.

Directed by Louis Leterrier (The Incredible Hulk, Clash of the Titans) it is clear from the opening sequence that this is going to be an expertly crafted, brisk film where the camera is constantly moving as are the people in the frame. Beginning with a round up of what eventually become known as the Four Horsemen the film first introduces us to Jesse Eisenberg’s J. Daniel Atlas as a magician who performs card tricks to the extreme while Woody Harrelson as Merritt never has as much to do as we’d like, but he sure makes for an interesting and charismatic mentalist that can hypnotize people and con them out of a fair amount of cash. Speaking of conning, there is also Dave Franco’s Jack Wilder who is the beginner of the group doing tricks with spoons only to lift his spectators wallets. Rounding out the team is Isla Fisher as Henley, a former assistant to Atlas, who now performs her own illusions and seemingly has the most success on her own. The four are brought together by a mysterious presence and presented with blueprints for what are seemingly extremely elaborate illusions. Backed by millionaire Arthur Tressler (Michael Caine) a year later these street magicians are now performing in front of sold out crowds in Las Vegas. It is in their first trick they rob a bank halfway across the world in Paris. This prompts an investigation by the FBI who here is embodied by Agent Dylan Rhodes (Mark Ruffalo) along with his partner from Interpol Alma (the wonderfully subtle Melanie Laurent from Inglorious Basterds). Rhodes goes from disinterested to hot on their trail once they stage two follow-up shows in New Orleans and New York while also enlisting the help of Thaddeus Bradley (Morgan Freeman) a man who debunks magicians secrets on his own reality show. All of this playing into the  overall question of what the goal is for these four magicians that seemingly have nothing in common other than a passion for making people believe in something that doesn’t really exist?

About halfway through the film that is what I began to consider to myself. What was the goal here, what were they going for? It would certainly be more than an elaborate get rich quick scheme, right? Sure there are a few clues dropped along the way that aren’t so subtle that we should certainly pick up on, but they are never given serious thought either. I won’t go into too much detail here so as not to reveal anything about the plot, but even as I’m going through the process of writing this review and reflecting on the film I’m also coming up with more questions on how certain things happened that I will hopefully be able to check off when I see the movie again. Fortunately there have also been a few aha! moments where things have come together I didn’t initially see the connection in. In working towards what the conclusion finally presents us with though it reveals the crux of the film in that it all seems a bit over the top, a bit too grandiose to accomplish something that in the end is so personal. Having said that and trying not to dig too deep into what this movie is trying to say or stand for as there is likely nothing there, Now You See Me also functions as a simple excuse to see what might be considered an under appreciated art form played out on a global stage and what it could be used for if you take it to its limits. It is ultimately an idea that in all likelihood could never be materialized, but is super fun and engaging to watch on the big screen as Hollywood uses its own magic to wrap us up in the crazy stuff the characters are performing on screen. Besides the strong cast that the occasionally confusing script relies on for support the film also has a strong sense of style and of what it is. We as an audience recognize the ridiculous levels here, but so do the filmmakers and in that self-referential tone the film carries comes the fun that the film elicits from its audience. Say what you will about Leterrier’s storytelling abilities, but his cinematic eye is just as extravagant as the illusions his magicians are pulling off.

Ultimately, when a script this complex and layered in twists, turns and one group of characters staying five steps ahead of another there is bound to be some confusion and plot holes that are left unexplained or even ignored completely, but while this may ring true several times throughout the film what brings it up to the level of being able to look over such things and simply enjoy it for what it is are those involved in bringing it to life. None of the four individual names here are reason enough to get excited over a film when they are on their own, but together as such an eclectic group of actors and actresses it is fun to watch them play off one another. This interestingly enough rings true for Jesse Eisenberg who breaks his mold of playing jittery young geniuses with low outward self-esteem by actually making the guy seem cool and quick witted that puts his intelligence into fine sarcastic form. Any movie that can do this is certainly to be lauded. What is even more impressive is that they place Eisenberg as the leader of the gang when you might expect him to land somewhere around Franco’s Jack. That isn’t to say Franco’s character is less cool, he is simply less experienced which lends to the actors status among his co-stars. Harrelson is almost criminally underused, but he does get some of the films best lines and he milks them for all their worth. On the other hand Isla Fischer seems to finally be gaining the momentum I always imagined her career might have as she came with a strong supporting spot a few weeks ago in The Great Gatsby, is a critical character in the new season of Arrested Development and now as a crucial part of this ensemble it is nice to see the actress finally getting what’s been due to her since 2005. While both Caine and Freeman seem to be on autopilot here their presence automatically ups the credibility of a project by a few notches and Mark Ruffalo, as always, gives it everything he has and more even if the material doesn’t necessarily deserve it. He and Laurent make a nice pair and despite the fact he is positioned as the films main antagonist he is impossible not to like.  The same could be said about the film as it may not be positioned to look like the main attraction in the crowded summer line-up, but I immensely enjoyed the experience of it and it’s impossible not to like.