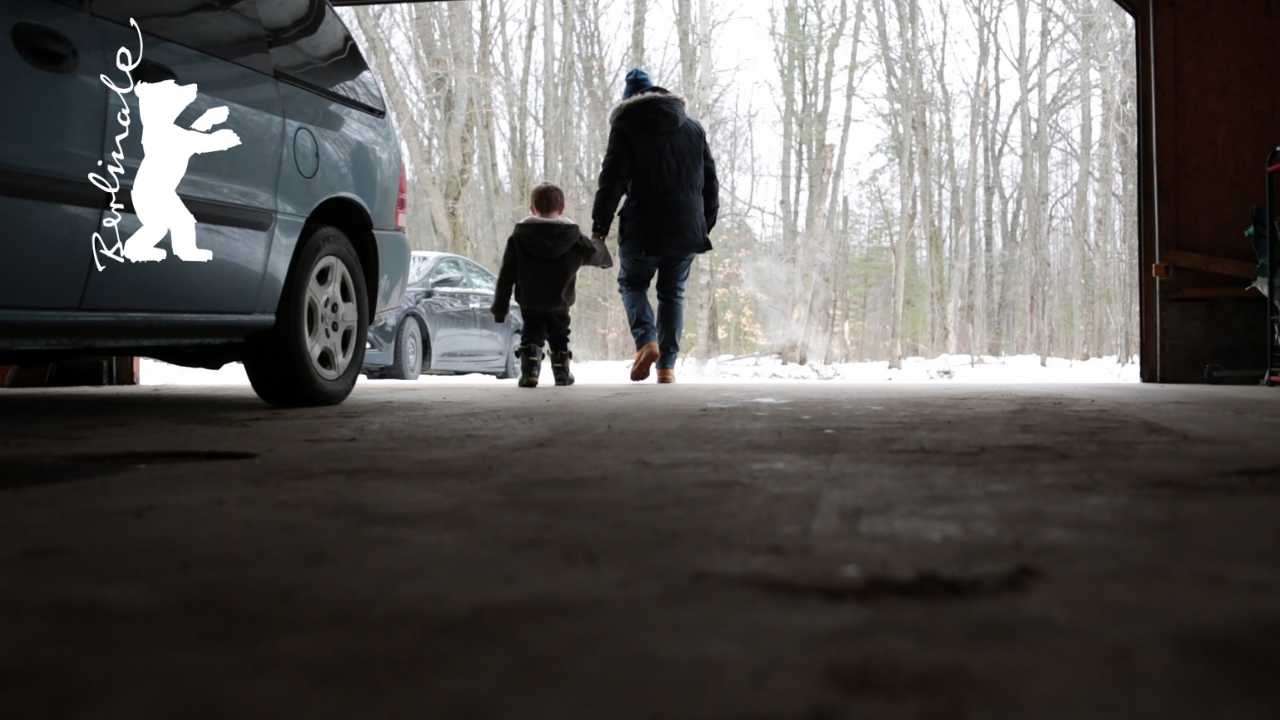 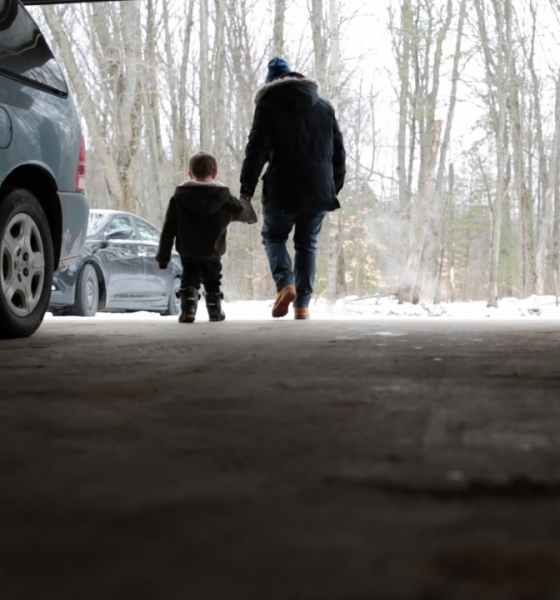 Sometimes cinema is a mirror held up to the viewer and the world around us, and sometimes it is a window through which we are invited to see the filmmaker, to know them better and live vicariously through their worldview for a little while. In the case of Angelo Madsen Minax’s North By Current, a film that can only loosely be categorised as a visual essay, the trans-multi-disciplinarian opts for a window whilst imbuing his work with the ambiguous optics of a funhouse mirror – we see a purposely skewed and frequently unreliable approximation of self. The result, a wildly ambitious diegesis on faith, gender, criminal justice, collective memory, and artistic license, brought about by a journey home in the face of family tragedy, is nothing short of extraordinary.

Minax’s story begins by introducing his hometown in rural Northern Michigan. Positioned almost equidistantly between the equator and the North Pole, the barren landscape of the old sawmill town where Minax was born imposes itself on the film immediately. Here is a place where life moves slowly, the seasons turn over harshly, and the ghosts of the town’s past have taken up residence. ‘It is said when you enter this town, you enter the river time zone, where time has no meaning’ a disembodied spirit-like voice narrates over images of water rushing nowhere fast. This ethereal narrator is the companion to Minax’s own narration, and as the director self-effacingly discusses his life’s toils and trauma throughout North By Current, the wispish secondary narrator philosophises on universal truths, eventually bridging the gap and entering into an almost metaphysical conversation with Minax.

Why would anyone want to return to a ghost town such as this? We soon learn that Minax’s two-year-old niece Kalla has just passed away suddenly, and so after twelve years living alone due to tensions over his transition due to his family’s Mormonist faith, he has decided the time has come to face up to his demons and personal trauma so as to be there at a time of family crises.

In one of the film’s many perspective toying sequences, Minax presents us with a triptych of scenes filmed at a diner in town. We see the director, his mum, his dad, and his sister discussing breakfast. The first time the scene plays out, we feel the silence between them and the emotional distance – this was filmed after Kallas’ funeral. We then see the scene again years later, as time has appeared to build bridges between the four of them, even if those bridges are still rocky. And then we see a re-enactment of the first diner encounter. Minax makes his status as an unreliable narrator clear, but that is not to be mistaken for him being a dishonest one. Rather, in moments such as this, we are given an insight into the worldview of a man looking back over the course of a life coloured with pain as time seems to have dissolved before his eyes. One minute he is sat interviewing his parents, who deadname him and recall his transition as being comparable to the death of their granddaughter, and shortly after, we see them walking back their bigoted views and declaring their pride at the man Minax has become. The temporal dissonance is marked – the emotional weight is profound.

North By Current isn’t just the story of the loss of Minax’s niece and his long-awaited homecoming however. It is moreover a courageous collage of vérité film, home video, and monologic self-analysis that draws together two distinct tales of persecution. We see first-hand the effect Minax’s transition has had on his immediate family, who for a long time were content to admonish him for living his truth. Then that is stunningly set side-by-side with the revelation that Minax’s sister Jesse and her husband David were wrongfully accused and convicted of the murder of their daughter. Tampered and falsified evidence secured a conviction that was thankfully eventually overturned. Still, the link Minax finds in the way his brother-in-law especially was demonised from day dot because of his past and how he has been subjugated for who he is and who his parents wanted him to be is starkly drawn. Candid conversations between Minax and David represent some of the film’s most powerful moments, and the bravery demonstrated by the director in confronting some of the terrible things his mother said to him when he announced he was to begin taking hormones cannot be overstated – imagining my own mum describing me being myself as a punishment for past abortions is genuinely horrifying. Thankfully, and vitally, Minax is able to broach that sharpest twist of the knife in his transitioning memory with his mum after years of carrying that torment in the film’s emotional peak – her apology feels like a long-held breath finally being allowed to exhale.

As years enmesh before the present day eventually breaches the surface, showing us how far Minax and his family have come in the years since Kalla’s loss, the scope and sophistication of the director’s work here reveals itself. At a moment of clarity, Minax reveals the epiphany he has reached during his deep-dive into his messy family life. ‘I learned a secret – when you speak the pain’s name, it dissipates. The greater the pain, the more times you need to speak it.’ Through an innovative approach to form and structure, and through the imposition of a narratorial voice that has an innate lyricism that cuts through the confusion and hurt in the filmmaker’s life, Minax has successfully exorcised his own demons whilst persuasively making the case for all those who feel persecuted to do the same. North By Current is going to be a very important film to those who find it.