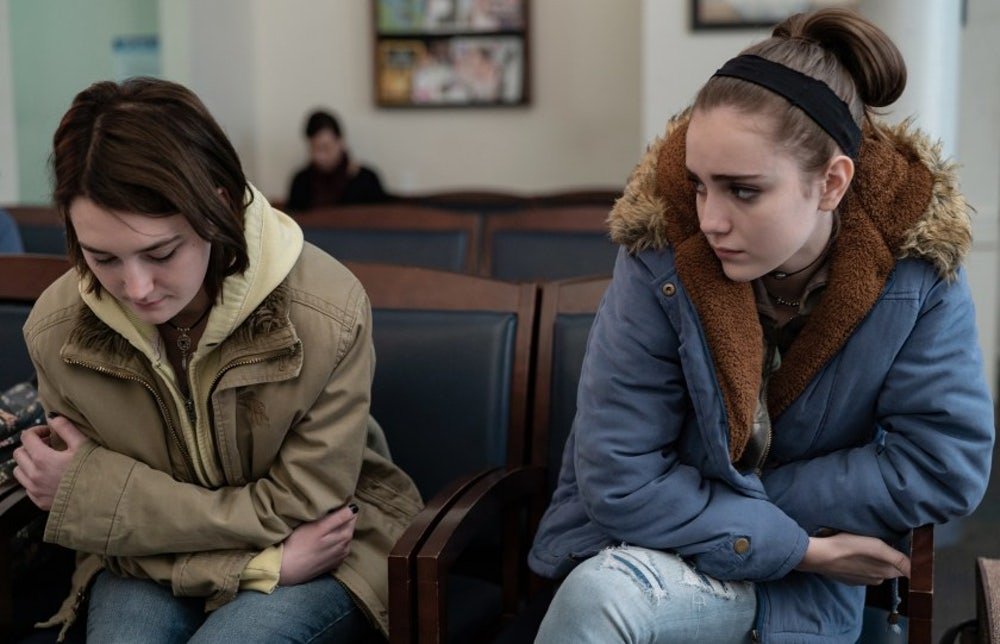 Eliza Hittman grows in stature every time she makes a film. From It Felt like Love to Beach Rats and now Never Rarely Sometimes Always, bigger crowds are now seeing her work. The Sundance and Berlinale crowds applauded Hittman’s latest feature – considered a potential awards season contender already. With a theatrical release in the US cut short due to the Coronavirus pandemic, it’s now available on-demand.

Never Rarely Sometimes Always is the story of Autumn (Sidney Flanagan) who, faced with an unintended pregnancy and a lack of local support, travels across state lines with her cousin Skylar (Talia Ryder) to New York City on a fraught journey of friendship, bravery and compassion.

There is a sheer ferocity in each frame but Hittman’s calm pacing eases the tension – at times it can feel like you are watching a documentary. Hittman is one of the most naturally talented filmmakers working today, tending to explore youth Americana but focusing on the hidden and under heard voices. Autumn instantly feels like a Hittman character – she is on the cusp of leaving high school and has a creative voice that nobody seems to recognise. Living in a small town her lifestyle is recycled daily and nothing has changed for her. While difficult decisions are made this is the beginning of Autumn’s journey into the world.

Abortion laws vary across the United States of America and Hittman explores this with great care and tenderness. Placing New York as the epicentre of Never Rarely Sometimes Always was crucial as many women travel here to seek termination. Once our protagonists arrive in the Big Apple their journey becomes the same as many others. We witness the hardships they go through to get here but New York prolongs the journey even further, with a lack of funds leading them down different paths. Never Rarely Sometimes Always uses actual doctors and specialists giving it more of a realistic angle and enhancing the ‘documentary’ feel. They treat every person with dignity and no judgement, the polar opposite to how Autumn was treated in her home state. The story is difficult, harrowing, empowering and yet not melodramatic at all.

Sidney Flanagan’s performance is one of the more striking performances of 2020 so far. Her on-screen debut is fragile yet compelling. Her journey is an eye-opener but audience members can also relate to her choices. While Never Rarely Sometimes Always discusses abortion laws quite frankly, it also becomes a coming of age story. The journey of Autumn and Skylar unfolds into a tale of sisterhood and family bonds. Skylar who truly is the anchor of this tale is poignantly played by Talia Ryder, with the connection between our protagonists feeling genuine and natural. There are moments of pure silence where you can sense what they are feeling.  Their body language and facial expression paint a thousand words and that comes courtesy of both their performances and Hittman’s framing. Words aren’t always needed in this journey and the bond they form is unforgettable.

Never Rarely Sometimes Always is a coming of age story that opens your eyes to a far greater issue within our society and plays out as a true tragedy. Hopefully, Hittman’s work will serve to broaden more horizons.