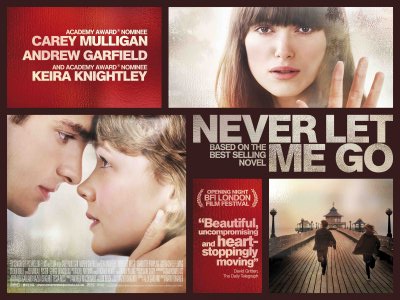 In 1997 a group of scientists got the world’s attention when they managed to grow a human ear on a mouse.  ‘Ear-mouse’ presented one of those rare moments in science where the future we’re used to seeing on the big screen suddenly becomes a reality, and when the science becomes real so do the moral and ethical questions.  In ‘Never Let Me Go’ Ruth (Keira Knightly), Cathy (Carey Mulligan) and Tommy (Andrew Garfield) attend a school for special children.  As they grow older the three experience the highs and lows of adolescence while the true nature of their life’s purpose is revealed.  ‘Never Let Me Go’ is classic science fiction with none of the gimmicks, it questions the frailty of human life and love in a medically advanced world that one day may become our reality.  A great cast, tender direction and amazing set design make this film excel despite some pacing issues in the second half of the film that slow down the momentum.

‘Never Let Me Go’ is full of great performances from every single cast member young and old.  Knightly, Mulligan and Garfield are a perfect fit in the lead roles each delivering heartfelt performances that drive the film.  A mention must also go to the child actors playing the younger versions of the three leads who are not only dead ringers for the actors but manage to establish their characters well.

Director Mark Romanek (One Hour Photo) has pieced together this film with a lot of love that shows up on the screen with each scene handled with great tenderness and beautifully shot.  The scientific world Romanek has created is wonderfully simple and based in a reality very close to our own which gives everything an authentic feel.  Following a similar path is the great set and costume design that keeps the film grounded while still giving it a unique style of its own inspired by tech from the 50’s and 60’s.

The best advice you can get going into ‘Never Let Me Go’ is to know as little about the story as possible (given you haven’t read the book the films is based on).  The story is great and slowly weighs down on the audience as the purpose of the characters lives is revealed.  The film loses focus in the second half as the timeframe shifts a little and some minor plot holes are exposed but the finale wipes the slate clean of imperfections.

‘Never Let Me Go’ is a bittersweet film that will pull on your heart strings while firing up the frontal lobes as the ethical questions raised will surely have you arguing with friends for weeks to come.  Bring it on.