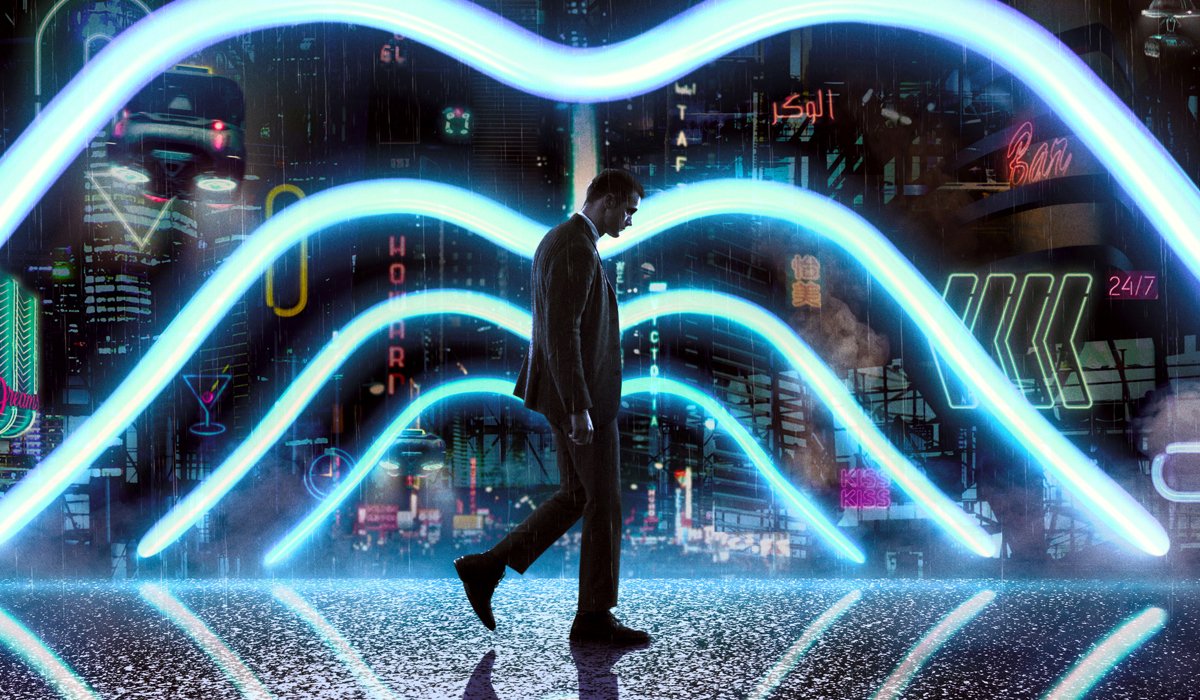 Big-screen videogame adaptations already proving a tough nut to crack for Hollywood, it was evident that for all his admirable efforts. Duncan Jones’ vision was hindered by overwhelming studio politics with his previous film ‘Warcraft’. Now he returns to the science-fiction genre, one that firmly established his directorial career and a passion project that has been gestating for sixteen years, in the form of ‘Mute’.

Serving as a companion piece to ‘Moon’, which introduced us to Sam Rockwell’s Sam Bell. Our central protagonist here is Alexander Skarsgard’s smoldering Amish bartender Leo, leading us through a bustling Berlin in the year 2052.

Reluctant to embrace the advancements of technology. Maintaining a deeply caring demeanour. Epitomised by his infatuation with the icy blue locks of fellow work colleague Naadirah (Seyneb Saleh), only to be suffocated by the smog of toxic masculinity that lingers within their bar ‘Foreign Dreams’. His strong but silent type feels like a throwback, representing the moral fibre that is sorely lacking elsewhere in this murky world, as the futuristic story becomes littered with fiendish film noir inflections.

When Naadirah suddenly goes missing, it sets Leo on a collision course with the larger-than-life wisecracking duo of Cactus Bill (Paul Rudd) and Duck (Justin Theroux), who become integral to uncovering the truth of her disappearance. Both former military surgeons, they have profited from patching up the shady souls that populate and dominate the city. Yet as their fortunes have soared, has their level of human decency tanked?

From the meticulous modesty of Leo’s apartment which is scattered with poignant personal touches from director Jones. To the vastness of its neon-lit dystopia, which you become immersed in.

There is a thrilling authenticity to this near-future interpretation of Berlin, that rather like its plot trajectory, is undeterred in shifting its audience into far uglier and unsettling territory.

A true sense of inclusion through its immigration and gender fluidity, oppressed by the cold, callous nature of authority figures. The deafening silence of an otherwise imposing presence in Leo, drowned out by the grubby ideologies of the characters (a colourful cameo from Dominic Monaghan a worthy mention) that he encounters. ‘Mute’ is also compelling in its culture clashes and frightfully resonant of a wider world, that is wrestling with its division of class.

The utilisation of the film’s supremely talented cast only heightens the intrigue. Squishing viewer expectations like the Ant-Man he is. The consistently comedic Paul Rudd is a revelation here as Cactus Bill. The emotional conflict that consumes him, powered by his eagerness to protect his precious daughter in an increasingly volatile environment, proves surprisingly potent.

The fascination with his character only deepens when he shares the screen with the blonde-haired brilliance of Justin Theroux’s Duck, whose character motivations are truly grotesque in their nature. Whilst their complex bromance does occasionally overpower and stunt the romanticism of its main plot thread, particularly in the middle act. Credit to Alexander Skarsgard as Leo, who articulates the character’s plight in soulful and sympathetic fashion, who is somewhat clinging to the innocence and simplicity of his past as he turns detective.

Stunning in its aesthetic. Underpinned by a sublime Clint Mansell score. The dark hidden depths of its layered narrative will undoubtedly polarise audiences. Yet for all its imperfections, ‘Mute’ reinforces why Duncan Jones’ distinctive voice is worthy of our attention.

A thought-provoking slice of sci-fi and a fitting tribute to his forward-thinking father.