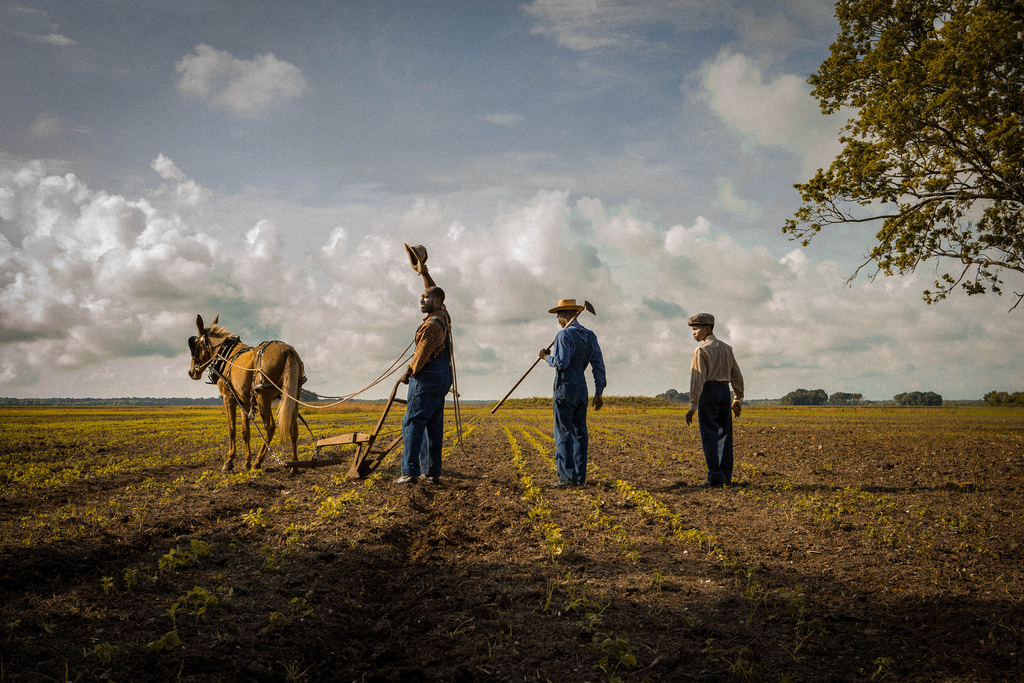 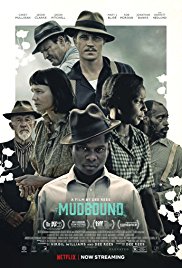 Adapted from the award-winning novel by Hillary Jordan, Mudbound, directed by Dee Rees, has received nothing but praise since its premiered at Sundance earlier this year.

In 1940’s Mississippi, two young men return home from World War II. One is Jamie McAllan, brother to Henry, head of the McAllan family. The other is Ronsel Jackson, eldest son of the black sharecroppers, living on the McAllan farm.

The film opens on a rainy day. Jamie and Henry are digging a grave for their late father when they come across the skull of dead slave. A sombre omen that could only predict death. Nevertheless the McAllan brothers have no choice, they must dig there. The Jackson family approaches on a chariot and are requested to help lower their dad into the ground.

The film then takes us back a couple of weeks earlier as members of both families narrate and share their inner thoughts and everyday struggle.

The two families mirror each other in very similar ways as if almost perfectly balanced. While both are working the cotton field in Southern Mississippi, they are also both awaiting a son, fighting the same war and on the same side. Both families have a wife, a husband and children. Both husband will have a wounded leg and both families will regretfully loose one member to murder. Predictably the reason behind these murders will differentiate these families forever.

The structure is unusual and made up of short dialogues juxtaposed to longer and richer monologues. Each monologue is another clue that will bring us back to that ambiguous and gloomy burial.

Dee Rees builds tension using the elements and sound. The rain and the mud are used to both distance the families and bring them closer. The fields are covered with mud but only the little white girls are wrapped in it. It is Laura McAllan who first mentions the word “mud”, in fact it is the word she uses to describe the farm, her home. It is also Laura who feels the need to wash away the mud and the dirt, bathing once a week. And if the Jackson family need water at all it is when Florence Jackson requests hot water to cure the McAllan’s children.

When the rain falls it floods everything but when it does, there is nothing any family, white or black, can do about it. They must equally wait and listen to the very same radio program. Unfortunately when the sun rises and dries the land, nothing much has changed and racism still hovers over the land.

Apart from Pappy McAllan and Ronsel Jackson, who embody the purely evil and purely good, the rest of the characters rest in the neither completely likeable nore utterly detestable category.  They all give, at some point, a glimmer of hope. They greet each other, help each other and cure each other.  There is even a possible friendship between the two alienated soldiers.

The entire cast give powerful and convincing performances.  Jason Clark is great as the lamentable Henry. Henry is just like his damaged leg. Still mourning the lost land his father selfishly gave up, he cannot seem to commit to any side. Instead he staggers between his dad and his brother, cowardly. Everything that comes out of Mary J. Blige, as Florence Jackson, is warm and honest as she holds on to her small dream. But when there are children involved she, also, is undecided.  Carey Mulligan as Laura is a strong character, constantly determined and supportive throughout the film.

Following the most violent scene of the film, in which both families loose one member, she almost makes us believe she could step up. But in the morning neither Laura nor Jamie can tell the truth. One leaves and one remains, leaving the McAllen family unbalanced and mudbound.

Mudbound is not drenched in violence. The very painful sound of a broken leg and a soundless torture scene are effective enough. Instead the film fluctuates beautifully between tension and hope. More of a testimony than an accusation, things are not always black and white in Mudbound and sometimes, even fore a minute, there is a grey area. Dee Rees does not end on a positive note but on a hopeful one. By bringing Ronsel back to life, she lets him go home and writes his own ending, hopeful that others will do the same.