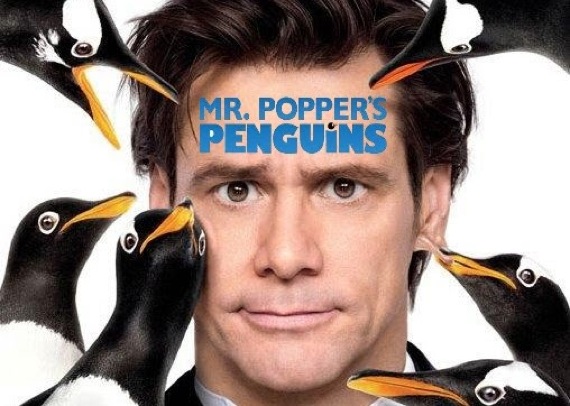 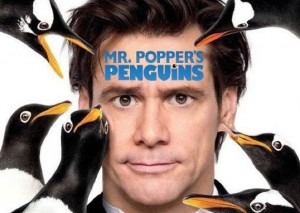 Jim Carrey stars as Tom Popper, a business man that is so focused on his job he is in danger of losing his children after already losing his wife. One day his life changes when he is left a group of Penguins by his late father. Mr.Popper tries to juggle looking after the penguins with his job and love-life, all the while trying to win over his children and escape a penguin expert eager to take the animals from him.

Jim Carrey has had some fantastic films over the years, LiarLiar and Bruce Almighty are still two of my favourite comedies. However, in recent years he seems to have slipped into roles that are either too ‘samey’ or just don’t suit him. Yes Man was essentially LiarLiar (man can only say yes/man can’t lie)and I Love You Phillip Morris despite being free, remains the only film I have ever walked out of (though there have been a couple come very close- Life in a Day, The Roommate) So with this in mind, I was extremely wary of what this film would have in store for us.

It begins following the same archaic formula as many other films of a moral disposition. Tom’s father is rarely around and as he starts a family of his own, he begins to do the same to his children and chooses work over family.  The way the story will go is apparent from the start, but as is with these type of films, it’s about the journey to the ending rather than the conclusion itself.

Carrey does show signs of his former glory the facial expressions and persona that everyone fell in love with has returned to a degree, yet there are still moments where you can’t help but shake your head at some of the gags and puns he comes up with. The supporting cast (in terms of fellow humans) are all satisfactory but few have any major roles the stand out performance is probably that of Poppers daughter. While it is wonderful to see Angela Lansbury starring as the elderly lady who owns the property that Popper is intending to purchase.

The film’s success or failure rested on the way in the penguins were presented and utilised and with a fantastic mix of excellent CGI and the use of real-life penguins it comes off almost perfectly. The CGi penguins make up the bulk of the main scenes, however they do not look out of place and at time it is unnoticeable when the filmmakers switch between real and generated penguins. The relationship Popper forms with the birds is most importantly, believable. While at first he is eager to get rid of them, we see him fall helplessly into a deep emotional bond that the great salesman that he is, cannot convince himself otherwise.

It is thanks to the decent CGI and the believable acting that this film is actually quite good. A truly family orientated film and, n that respect, it is a great success. While it perhaps lacks an actual anti-protagonist as such, the comedic moments are mixed well enough with the sentimental sections to create the overall feel good factor that it promises to deliver.

Mr Poppers Penguins is one for everyone to enjoy and is certainly Jim Carrey’s best comedic performance since Bruce Almighty, which seems like an awfully long time ago. Hopefully this has put him back on the comedy radar.