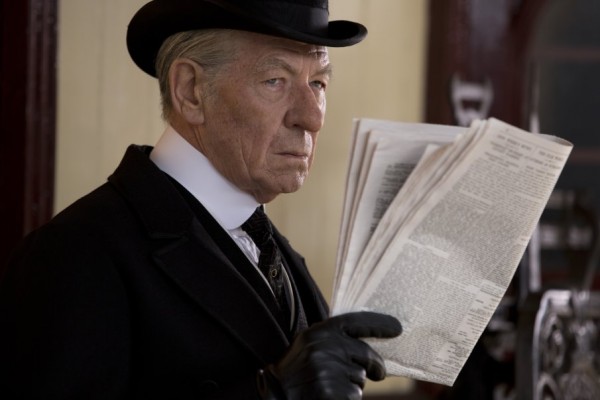 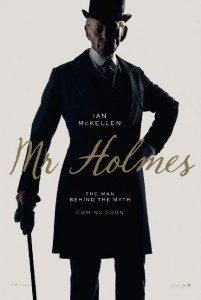 Movies sometimes have technical credits with opaque meanings: ‘gaffer’, ‘key grip’, ‘jenny operator’ and perhaps the most opaque of all, ‘directed by Michael Winner’. To these, I propose an addition: ‘wrinkle farmer’. For in Mr Holmes, as Sir Arthur Conan Doyle’s iconic detective, Ian McKellen is made to look 93 years old.

We are used to seeing McKellen masked by a beard in The Lord of the Rings and Hobbit trilogies or cranially capped by a metal cowl in the X Men films. Here, save for a few scenes in a top hat – not for this Sherlock a deerstalker and meerschaum pipe – his head is undefended against the elements, the close-cropped hair the only clue to past attentiveness to his appearance.

Bill Condon’s film, adapted by screenwriter Jeffrey Hatcher from Mitch Cullen’s 2005 novel, ‘A Slight Trick of the Mind’, situates Sherlock in retirement in post World War Two Britain, tending to his bees and battling memory loss. Baker Street life is far behind him. He hasn’t taken a case in thirty years. His last case bothers him – he thinks of it as a source of guilt. His housekeeper is no longer Mrs Hudson, rather Mrs Munro (Laura Linney) a West Country widow with a young son, Roger (Milo Parker) who is in awe of the detective. As for Dr Watson, after leaving Holmes to get married, he has since passed away. Holmes is short of a sidekick who stimulates him.

The film charts the growing friendship between Holmes and young Roger, separated by over eighty years. Roger has read John Watson’s Sherlock stories and found one, penned by Holmes himself, describing a young man, Mr Kelmot (Patrick Kennedy) who has come to see him – undoubtedly about his wife (Hattie Morahan). But Holmes’ memory has failed him. He has returned from Japan with a supply of Prickly Ash, a substitute for his Royal Jelly, which he hopes will stimulate his mind. Actually, it is Roger, who becomes a beekeeper in training, who performs this function. Holmes was invited to Japan not because of the promise of a miracle cure, but for another reason of concern to his host, Mr Umezaki (Hiroyuki Sanada).

The revelations that unfold are not of the melodramatic kind. We see a clip of a faux Sherlock Holmes film, The Woman in Grey, with quite a neat piece of casting. Condon’s film deals with deduction, false conclusions and storytelling. It arrests your attention from the opening shot – a steam train streaking through the countryside. Holmes abrades a young passenger for attempting to disturb a wasp – a ‘foreshadowing’ as Watson might have concluded. It is full of details that tell you that the art department didn’t just do themselves proud with the right sort of magnifying glass and blower for the apiary (for example) but keep your senses in a heightened sense of alert – you watch the film almost craning towards the screen, invited to look at a volume that may have been in someone’s collection for twenty years, just to look for signs of contrary evidence.

While the eye is impressed, the ear is less so. Linney’s accent, undoubtedly culled from listening to Susan Carter in The Archers (the popular Radio Four farming drama that perhaps is unfamiliar to younger readers) wavers considerably. Frances de la Tour as the spiritualist music teacher Madame Schirmer goes for ripe Middle European. In her case, I enjoyed the indulgent tone, though it was very close to Frances Barber’s caricature in the same part in the film-within-a-film. Other performers with less demanding roles, such as Roger Allam as a country doctor, John Sessions as Sherlock’s brother Mycroft and Phil Davis as a policeman, fare better.

A criticism is that Mr Holmes lacks an emotional wallop. The Sherlock Holmes stories could be judged in a similar vein. But details matter. You cannot take your eyes of McKellen, who simply has the most expressive visage, as if every wrinkle had been put through a facial Olympics. As he battles to overcome the obstacles of gentrified dementia, you root for him. I particularly liked McKellen’s walk, the thrusting cane that is like the rod of an old fashioned locomotive; the performance has been thought through. The work ‘elementary’ never appears, but McKellen’s work here has the force of elemental exactitude.