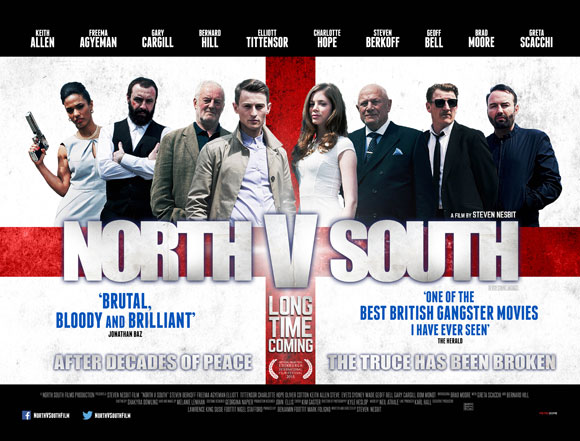 British actor Brad Moore is a relative late comer to the world of acting. Having moved into acting at 40 years of age Brad has worked his way up from doing stand-up through shorty films to the feature films he stars in today. His recent film North vs South has recently been released, and focuses on a love story with the backdrop of warfare between North and South criminal underworlds. Brad speaks to Movie Marker about his decision to change his career, and the path that has taken him to where he finds himself today, and what it was like to work with Keith Allen.

Stu Greenfield – You spent time working in stand up whilst you pursued an acting career. Do you ever do stand-up now, and do you miss being in front of an audience?

Brad Moore – Growing up in the 80s my friends and I worshipped stand-up comics and were obsessed with watching videos of all the great stand-up comics. Our favourite was Richard Pryor. As teenagers, we used to go to the old Comedy Store as often as possible, watching new acts like Jack Dee, Steve Coogan and Harry Hill. I secretly dreamed of being a stand up but was too self-conscious in my 20s and 30s and life just gets in the way, I guess. You need a decent sized ego to want to perform stand up but you also need the ability to lose the ego and risk making a fool of yourself to get on stage!! Stand ups are so brave. So when I made this crazy move into the business aged 40 I did stand up for 2 years up and down the UK. I did not have time to go to drama school for three years so I needed to challenge myself as quickly as possible in terms of performance. During this period, I was also cast in and shot over 20 short films so these two elements really represented my training ground as a performer. I was ok as a stand up, but I used to get very nervous and it didn’t feel like it was getting any easier!! I seem to thrive more as an actor.  After the short films, bigger parts started coming my way, so I decided to focus more on the acting.

SG – You have had parts in comedies such as Up There, but would a leading comedy role be something you would be looking for?

BM – I’ve just played the lead antagonist in a cracking British comedy called ‘Golden Years’ which is all about a group of pensioners who start robbing banks to recover their pensions! I play a spray tanned, self-obsessed, over ambitious copper on the heels of the pensioners. I was acting alongside some of the country’s finest actors such as Alun Armstrong, Simon Callow, Bernard Hill, and Una Stubbs. It was such a privilege to perform with these people as I had grown up watching them on TV. They are all a lot of fun and very supportive. I was the baby of the bunch which was crazy! I’ve also just finished shooting a boxing comedy called ‘Gloves off’ which I co-wrote with the director Steve Nesbit and performed alongside comedy royalty Ricky Tomlinson and Alexie Sayle (who actually invented alternative comedy in this country) so as you can imagine that was a dream come true. I’m not sure that has sunk in yet, maybe it will when I see the film.

SG – You have worked on a number of films, including North v South, that focus on UK violence and gang culture. Has this been a conscious decision?

BM – It’s definitely not intentional. All actors want to eventually play a range of characters but you also have to start somewhere. I’ve only just really started acting in feature films and Montana and North vs South are my first starring roles. Film is a visual medium and I think my look lends itself to these rough characters as I’m short, stocky and originally from the east end of London so I can play that street smart vibe. They have a violent feel to them but both are also well crafted stories with colourful characters. 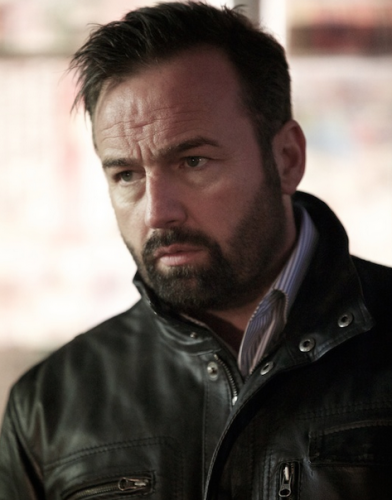 SG – Do you ever get concerns about being typecast?

BM – Well, I definitely wouldn’t want to be typecast but it does happen to some great actors so I guess you have to try to keep looking for interesting characters that you feel you can bring alive. I think I’ve been fairly lucky so far as I’ve played a reasonable range of characters, from an unhinged psychopath, a metrosexual policeman and recently a very kind, sincere ex-boxer in debt. That said I’m happy to be typecast if its playing James Bond for six films. I’ll type an email to Barbara Broccoli and let her know.

SG – In terms of your latest film North v South, did you do anything in particular to prepare for the film?

BM – I met Steve Nesbit at the Teenage Cancer Trust charity event, we had a few drinks and knowing he was a film director, I started showing off by improvising several different psycho gangsters for him.  We had a lot of fun and a fantastic evening, about 7 weeks later he sent me the script for North vs South and asked me to read it, with the lead role of Gary Little in mind.  It was only a year later when we were on set shooting the film that he had told me that my improvisations had inspired him to finish the script.  To say I was flattered and honoured is an understatement, Steve is an enormous talent and I am hundred per cent sure you will be watching a lot more of his films in the future.

SG – The film features some fantastic British acting talent including Geoff Bell, Bernard Hill, Keith Allen, Steve Evets and Steven Berkoff. Do you manage to learn from them during filming, or do they offer snippets of wisdom?

BM – I think you always learn from the actors your working with and I would watch them like a hawk, although I’ve never asked any for advice really. I think I learnt more from some of the earlier films before I developed my own approach and when my parts were small I had time between scenes to watch the other actors perform. I spent a month watching Stephen Graham and David Ohara in Best Laid Plans because I didn’t have any lines!! I remember thinking how three dimensional they were within the scene and how they would always be in the moment as soon as someone shouted action. I definitely learnt from the discussions that take place about the scenes in set rehearsals and read through’s in pre-production.

SG – On that topic, how was it working with Keith Allen?

BM – Keith was very charming. He very professional and very on point with his character. He kept himself to himself for a lot of the film and likes to play golf or stay in his trailer practising on his Ukulele. We had a lot of fun with our on scene relationship, as in the film we hate each other so we improvised a few face off scenes and some of them made the cut which was lovely. Improvising is normally wonderful at the time but often doesn’t serve the story so rarely makes the final cut.

SG – You turned to acting later in life, did you have a light-bulb moment that prompted the move or was it something you had considered for a long time?

BM – I always struggle to explain this as it’s quite crazy, basically, I’ve always been in awe of actors and comedians but as previously mentioned never really brave enough to give it a go until recently. I came from a very working class family based in the rougher parts of London.  I loved films all my life, like a lot of people do, and when I was around ten I lived next door to an actress called Pauline Quirk, from Birds of Feather.  We used to play acting games together on the Street outside our flats in Stamford Hill, but I didn’t do anything from ten to 40, so I had 30 years where I didn’t act at all. I don’t come from an artistic roots or anything like that.

As all parents do I started telling stories to my son, in bed, and started doing the characters and doing voices, and started enjoying the performance of it all!!  I thought I love this so much and I’ve loved film and comedy all my life, so I have to do it.

SG – How do you feel having life experience improves or impedes your acting ability?

BM – I think for me personally it improves what I do. Everything happens for a reason and if I started when I was 18, I might not have the correct mind-set, life experiences or imagination to authenticate a character. The right time for me to start was when I was approaching 40. I try where possible to use the experiences of my own life to bring a character to life. I heard Sean Penn say a few years ago that it doesn’t matter when you start as long as your able to bring what has happened up until that point to the game. That makes a lot of sense to me.

North vs South was released in the UK in October 2015 and Brad can soon be seen in the comedy Gloves Off which is due for release in 2016.