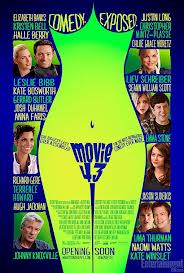 Directed by:  Bob Odenkirk, Elizabeth Banks and others

I don’t even know where to start with this movie. It is certainly going to be impossible to write a full evaluation of the film as I would usually be able to do with a typical film as this is not your typical film, and I don’t mean that in a good way…at all. Over the past year or so I’d heard rumblings of what exactly Movie 43 was or what it was supposed to be. Naturally, the main thing we heard about it was that it contained an onslaught of Hollywood A-listers that were melded together to form some kind of rampant comedy that moves through its stars as fast as it does offensive jokes. Problem with the film is that it is trying way too hard and only succeeding once in a blue moon to really capture any genuinely funny moments. I won’t lie in saying I was somewhat excited to see the film, as someone who enjoys mainstream comedy and this one in particular having seemingly no regard for what people might say no matter who it offended, sounded rather intriguing and fun. I can buy into that kind of thing and see having a great time with it but even more than being completely tasteless, Movie 43 is more than anything just dumb. With this ridiculously large, sprawling all-star cast you might expect there to have been some real incentive making each of them want to participate or feel attracted to the project and with a reported budget of only $6 million it certainly wasn’t the money. What could it have been that drew in so many big-name actors and actresses an convinced them this was a good idea? We may never know because all we are left with is a steaming pile of unfunny droppings of underdeveloped sketches that wouldn’t even make it onto a bad episode of “Saturday Night Live”.

Beginning with some extremely credible actors with serious weight to their names, Hugh Jackman and Kate Winslet do the best to class up their blind dating segment but only so much can be done when a scrotum attached to a neck is involved. From there, the film goes on to analyze the social constructs of love and sex through a metaphor with poop and point out that leprechauns really exist and are extremely addicted to balls. These paper thin sketches are linked only by an even thinner arc that concerns Dennis Quaid as the screenwriter responsible for all of these random ideas pitching them to Greg Kinnear. Quaid is completely random here and out of his element to the point it’s almost awkward. It is hard to watch but only gets worse when Kinnear needs to ask his boss Common for permission to produce Quaid’s movie and is rejected for a more important meeting involving Seth MacFarlane. In case you’re wondering, none of this adds up to anything. Even worse than this dead end of a storyline is the way in which pointless skits featuring Richard Gere, Halle Berry, and the real life couple of Lev Schreiber and Naomi Watts put their reputations on the line by putting no effort in to being clever but survive on one note jokes that fall flat from being ridiculously stupid and pointless rather than gut-busting and, at the very least, mildly entertaining.

There are a few skits that do tend to be more successful than others though I still couldn’t say if this is because the others are so bad. I laughed at the Terrence Howard bit despite it being a prime example of a one note joke. I even laughed at the Emma Stone and Kieran Culkin banter that was probably the wittiest thing in the entire film and seemed to consist of more improv than anything that was set in stone with the script. Stone is so naturally charismatic and charming it is impossible not to give her a few laughs if not for being in this thing in the first place, but for trying, which is more than you can say for most of the names featured here. The only other one I found some satisfaction with would be the super hero speed dating bit that had Justin Long dressed as the boy wonder, green underwear and all. Jason Sudeikis gave his typical schtick as Batman and a slew of actresses like Leslie Bibb, Uma Thurman, and Kristen Bell show up as other super hero staples that do nothing more than bring a recognizable set of characters to a skit drowning in stale jokes. Many of the random skits, or “commercials” in between the skits would garner a random laugh  here and there but like the film as a whole there is nothing substantial to hold onto or even see as memorable.

I walked out of the theater wondering why I’d wasted my hour and a half on the film as the most enjoyable part of the experience was re-watching the trailers prior. I didn’t expect much after some of the first reviews began to come in yet I was too curious to not go and check what all the fuss was about, even if it was really bad fuss. In the end, it was just as bad as you’ve heard and I will have no problem ever re-visiting this lazy compilation that gives pieces of dialogue that someone thought was really funny and felt the need not to flesh out a story either around it or a situation for that line. The jokes resort to easy sexual references and vulgarity to guarantee a laugh but even the most virgin mind to this type of humor will grow tired of the act quick and yearn for something with a hint of intelligence. The film is amateur hour at a dingy comedy club. I won’t even go into the final skit featuring Elizabeth Banks and Josh Duhamel; if you want to witness the low point of human civilization you might look it up on a site where you can stream the film. There is no need for this film, not at all, but it has made the task of picking the worst film of 2013 very easy and has claimed the title really quickly. If there is anything worse than Movie 43 that comes out this year we may indeed have to check the math on the Mayan calendar and see if the end truly isn’t just around the corner.