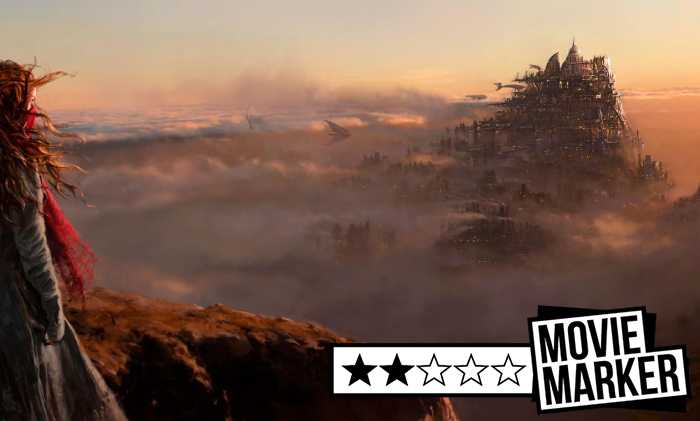 Opening on a vast empty wasteland, before you can even strap yourself in Hester Shaw (Hera Hilmar) is throw into a high octane escape from a humongous London on wheels attempting to capture a tiny (in comparison) trading outpost for supplies. The strong opening is improved massively by dumping us into this world and letting the actions explain the rules and regulations of what we’re about to watch. Unfortunately, this is all thrown out of the window as we progress further, ending up in a multitude of scenes where characters stand around explaining things to one another, turning Mortal Engines into another wannabe blockbuster franchise lacking original content and adding nothing of any significance to the adventure genre.

Mortal Engines presents the audience with an idea that has never been seen on the big screen before and it’s easy to see why the novel was chosen to adapt. The films concept is definitely much better than the on-screen execution of it’s storyline. Ignoring the fact it’s full of ideas and tropes we’ve seen countless times, the issue lies with the dull and lifeless execution most moments are given. Back stories are contrived and tick off clichés the audience can see coming a mile off, adding no real depth to the film’s key players. Also, despite it wanting to be an adventurous film, it becomes evident early on that we move from Point A to B without the fun or wonder that should fill the audience’s head within this genre. What really sucks is how the opening captures this imagination effortlessly, before doing away with what could have potentially made it stand out from other blockbuster attempts.

While no characters ever becomes unlikable or annoying, it becomes increasingly hard to root for or even care about anyone. Hester aside, there’s a lack of interest that follows each of them around. Tom Natsworthy (Robert Sheehan) switches allegiances after events that unfold and we can guess every action he is going to take within his first scene. Anne Fang (Jihae) may look awesome, but she’s just another mentor figure who comes into the heroes lives with no substance to her. The remaining heroes are full of forgettable and nameless crew members, only there to bump up the numbers within the heroic moments.

The heroes aren’t the only ones who fail to leave any impact. Big bad Thaddeus Valentine (Hugo Weaving) is cunning and manipulative which suit Weaving’s acting chops perfectly, but there’s something missing with his motives. We get a semi-predictable explanation, but it’s not enough to ever truly despise him. Alongside him is a robot/zombie hybrid (seriously) named Shrike (Stephen Lang) hot on Hester and Tom’s tail. He feels like a major afterthought to the narrative and is given a handful of unintentionally funny moments, causing you to laugh at the film and not with it.

Director Christian Rivers is mainly known for his visuals effects work and with an estimated $100 million budget, it’s no shock that the effects all looks superb. London is a behemoth to behold, and when it’s on the prowl, it feels like a tiger hunting it’s prey. With the rich watching on and cheering as their city attacks, unmoved by the effect it has on those below them – it really adds to the society and hierarchy that rules in this dystopian world. This is an interesting angle whenever it appears on screen, yet it’s never fully explored. The visuals hold up for the entire run time and especially impress during the final battle, even causing a few audible gasps from those in my screening room. While the plot makes it hard to stay focused on what is happening, the fantastic visuals do a wonderful job of sustaining the believability of what is transpiring on screen.

Sadly, Mortal Engines uses up all it’s petrol in its fantastic opening and runs out of steam soon after. It’s got a brilliant concept at the heart of it but ultimately fails to live up to the potential it possesses. The visuals are beautiful, but nothing else in the film comes close in terms of quality.