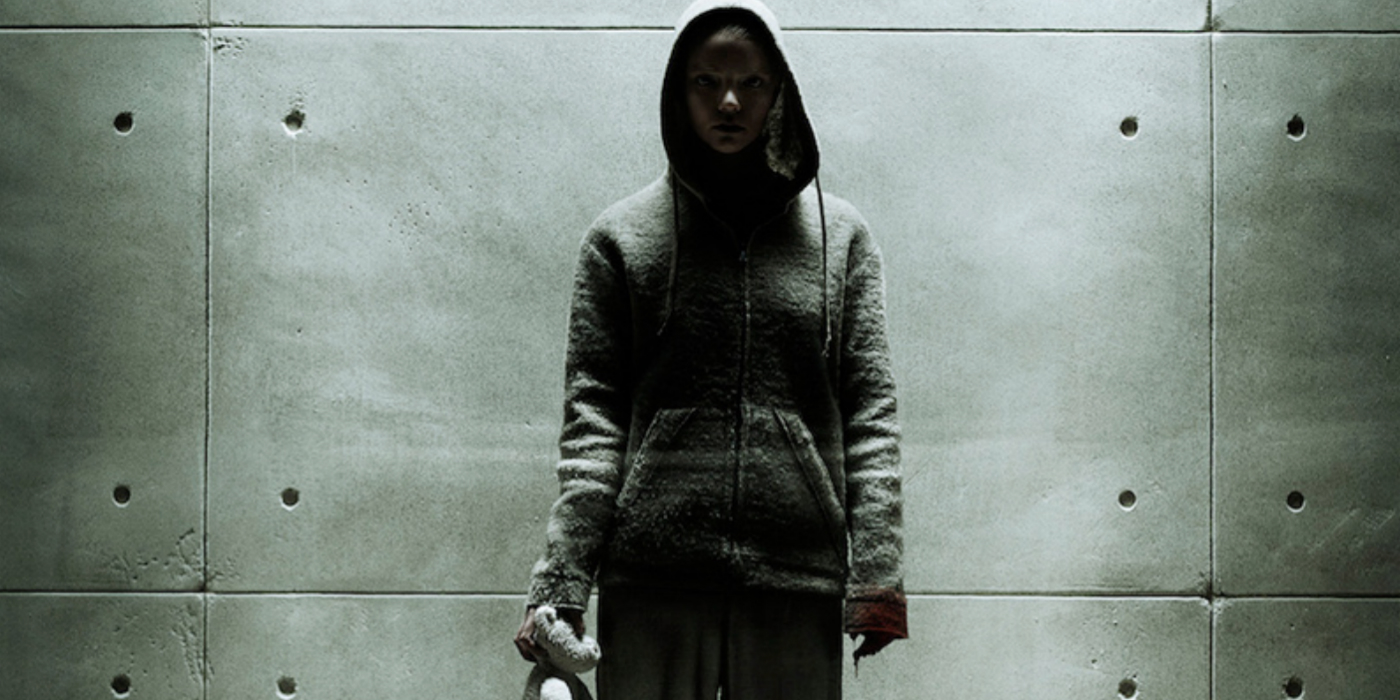 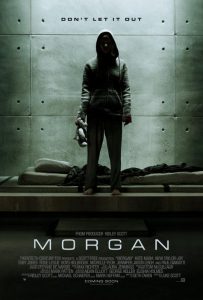 Lee Weathers (Kate Mara) is a corporate troubleshooter sent to evaluate a unique program.  Morgan (Anya Taylor-Joy) is the project.  While being only five years old, Morgan is the size of a teenage girl.  Her DNA is a mixture of human and synthetic and her brain contains nano-sized robots that have altered its development.  She has precognitive abilities and is extremely strong and fast.  A team of scientists has been working in secret on the project that led to Morgan for seven years in a house located deep inside a forest.  Morgan used to be allowed outside but a behavioral scientist named Dr. Amy Menser (Rose Leslie) took Morgan beyond the boundary of the compound and lead researcher Dr. Lui Cheng (Michelle Yeoh) put an end to her field trips.  Morgan is kept in an isolation cell and monitored by a rotating group of researchers.  One of those researchers, Dr. Kathy Grieff (Jennifer Jason Leigh), brought Morgan her lunch and decided to eat with her inside the isolation cell but Morgan attacked her, stabbing her several times in the eye.  This has led the corporation that is funding the research to send Weathers to oversee an evaluation of the project, including a psychological examination of Morgan by Dr. Alan Shapiro (Paul Giamatti), and determine if it should be terminated.

There’s a good movie to be made out of the ideas in “Morgan.”  Sadly, the movie I saw wasn’t it.  It’s not terrible and there are good performances from Kate Mara and Anya Taylor-Joy but there are some odd choices made by some of the characters as the story progresses and there were a great deal of unanswered questions that nagged at me while I was watching the film.

“Morgan” takes a familiar concept and explores it fairly well.  All the scientists see Morgan as a child trying to figure out her place in the world while Weathers sees Morgan as an “it” and something that can be discarded like a defective piece of plastic.  That conflict is central to the plot and kicks off the carnage that makes up the last 30 minutes of the movie.  My main problem with this part of the film is the willingness of the scientists to ignore all of Morgan’s past deeds and refuse to do what is necessary.  One of the team even has a high-powered rifle pointed at her chest and still delays shooting long enough for Morgan to disarm him.

This is the same problem I have with most horror/thriller movies where characters make decisions that clearly go against their own best interests and what they know to be true.  This logical misstep wasn’t in evidence during “Don’t Breathe” as even when the characters made a decision that kept them in peril it made sense and they didn’t hesitate to take action against their enemy although it wasn’t always as effective as they would have wanted.

“Morgan” is a victim of lazy storytelling.  We’ve seen many of the ideas in the film in other better movies but here the script seems to be taking a “cafeteria” approach by picking certain elements and ignoring others.  The script is trying to make a point about man’s arrogant belief that he can control nature but that gets lost in all the stupidity and carnage.

The movie also isn’t shy about telegraphing a twist that is revealed late in the film.  Again, this is lazy storytelling since, in order for it to be a true twist it shouldn’t be painfully obvious early on.  One particular shot in the film gives the surprise away with all the subtlety of a high rise building being imploded.  It screams, “Hey!  Look at this! You think this implies anything important about what’s coming later?!”  While the specifics of the twist aren’t given away, the basic idea of what’s going to happen is clear.

There are things to like in “Morgan.”  Kate Mara and Anya Taylor-Joy give intense and uncompromising performances.  Taylor-Joy is given a particular icy look with her makeup and hair that give her character an otherworldly appearance.  She is different on the inside and that is reflected on the outside.  Mara is a no-nonsense business woman with a penchant for cutting through the niceties of everyday conversation and not worrying about hurting people’s feelings.

There are, perhaps surprisingly, some very good fight scenes exclusively between female characters.  While it is never directly stated, Morgan appears to have been created as a living weapon as she is well versed in hand-to-hand combat and very good at turning everyday items into weapons.  She has increased strength and endurance and is usually coldblooded in dealing with an enemy.  Weathers is also good with her fists and with a weapon as well.  These two duke it out on at least three occasions in the film and each one is intense.  The research team’s physician is also good at fisticuffs.  This comes from out of nowhere and feels again like lazy storytelling and a way to keep the plot moving forward.

“Morgan” is rated R for some language and brutal violence.  When there is violence in the film it is usually bloody, sometimes very bloody.  The movie starts with Morgan’s attack on Dr. Grieff and, while not bloody on film, the sound effects used are rather suggestive of gore.  Foul language is scattered.

“Morgan” has some very interesting ideas that get bogged down in thriller clichés.  It wants to be a creepy look at Man playing God but eventually turns into a predictable and nothing more than average monster movie.  It isn’t the worst way to spend 90 minutes in a darkened, air-conditioned theatre with some good performances and fight scenes but it could have been a great deal better.

“Morgan” gets three stars out of five.

Venice 2016: The Light Between Oceans