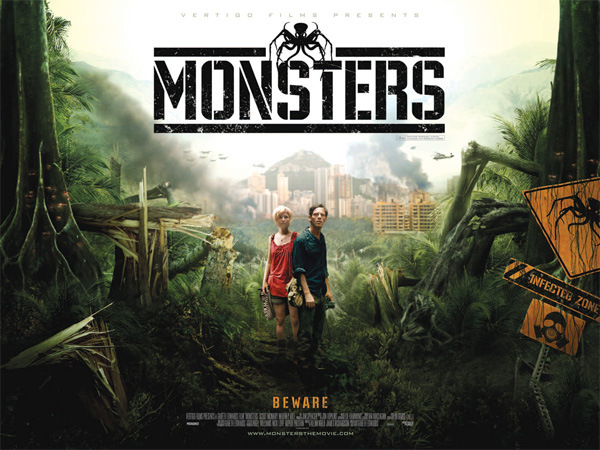 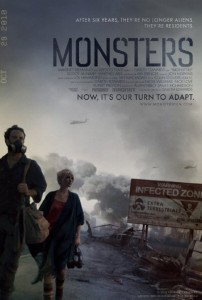 Monsters is the stunning debut film from British Writer/Director/ VFX genius Gareth Edwards, in which a Space Probe sent out to investigate Europa, one of Jupiter’s moons, has crash landed in Central America with some unexpected guests. That was 6 years ago and now the guests are here to stay.

The film stars Scoot McNairy and Whitney Able (Who are married in real life) as two Americans trapped in Central America just before the borders back to America are shut due to the ever growing population of the “Aliens”.The story involves Andrew Kaulder (Scoot McNairy) and Samantha Wynden (Whitney Able). He’s a free-lance photographer. She’s the daughter of Kaulder’s boss. Her father calls Kaulder and orders him to be sure Sam gets out of Mexico unharmed. He reluctantly agrees. Their journey on paper seems easy enough, get to the coast and get one of the ferries out of the country and back to the safety of America but that plan quickly goes awry after Kaulder and Wynden’s passports are stolen at the ferry port leaving them to navigate their way through the beautifully dangerous ‘Infected Zone’ in order to return home.

It is at this point that the film really hits it’s stride, and we see Wynden and Kaulder really start to gel, it is often the case in films that people are thrown together in a disaster situation, and we all know that the relationship is doomed to fail (Sam and Mikaela in Transformers for instance), but here we see two people that are starting to develop real feelings for each other, and that is portrayed beautifully through McNairy and Able, both were in Central America to escape their lives back in the States, and in each other they in turn find the thing they were looking for, it is this that makes Monsters the spectacular film that it is, with it’s title you wouldn’t expect the love story aspect to be as gripping and amazing as it is but it turns out that was what we were here for after all, and the Monsters are in fact just the supporting characters.

However the Monsters steal every scene they are in, Edwards takes the ‘Cloverfield’ approach to his monsters, taking as long as he can before fully revealing what they look like, up until the final few scenes of the film we just see glimpses of the creatures, a tentacle here, a figure in the darkness there, and in one fantastic scene we witness their destructive power on our traveler’s unfortunate convoy. These creatures are unlike anything else ever seen in the cinema, Gareth Edwards has created something that is beautiful and dangerous in equal measure as the stunning final scenes show. However over the course of the film it becomes apparent that these creatures aren’t the threat we perceive them to be, they are not some Alien invaders hell bent on destroying Earth, they are simply creatures trying to survive, and like any other creature they attack when threatened, which in turn makes them the real victims of the film.

Monsters stands tall as a fantastic film making achievement from all involved, from the fantastic performences from McNairy and Able to the fantastic direction and CGI from Gareth Edwards, and what makes the film even more spectacular is the fact it was all made for less then £25,000, everything was filmed on location, the crew was just Edwards and two others, all of the CGI was done by Edwards using off the shelf software and apart from Able and McNairy all of the other cast members are locals who were around at the time of filming. This all amounts to a film made on a minuscule budget by essentially five people, and it in the end has the feel of a mega budget blockbuster. Gareth Edwards deserves every single plaudit he has gained from this film.

The Two Faces Of January