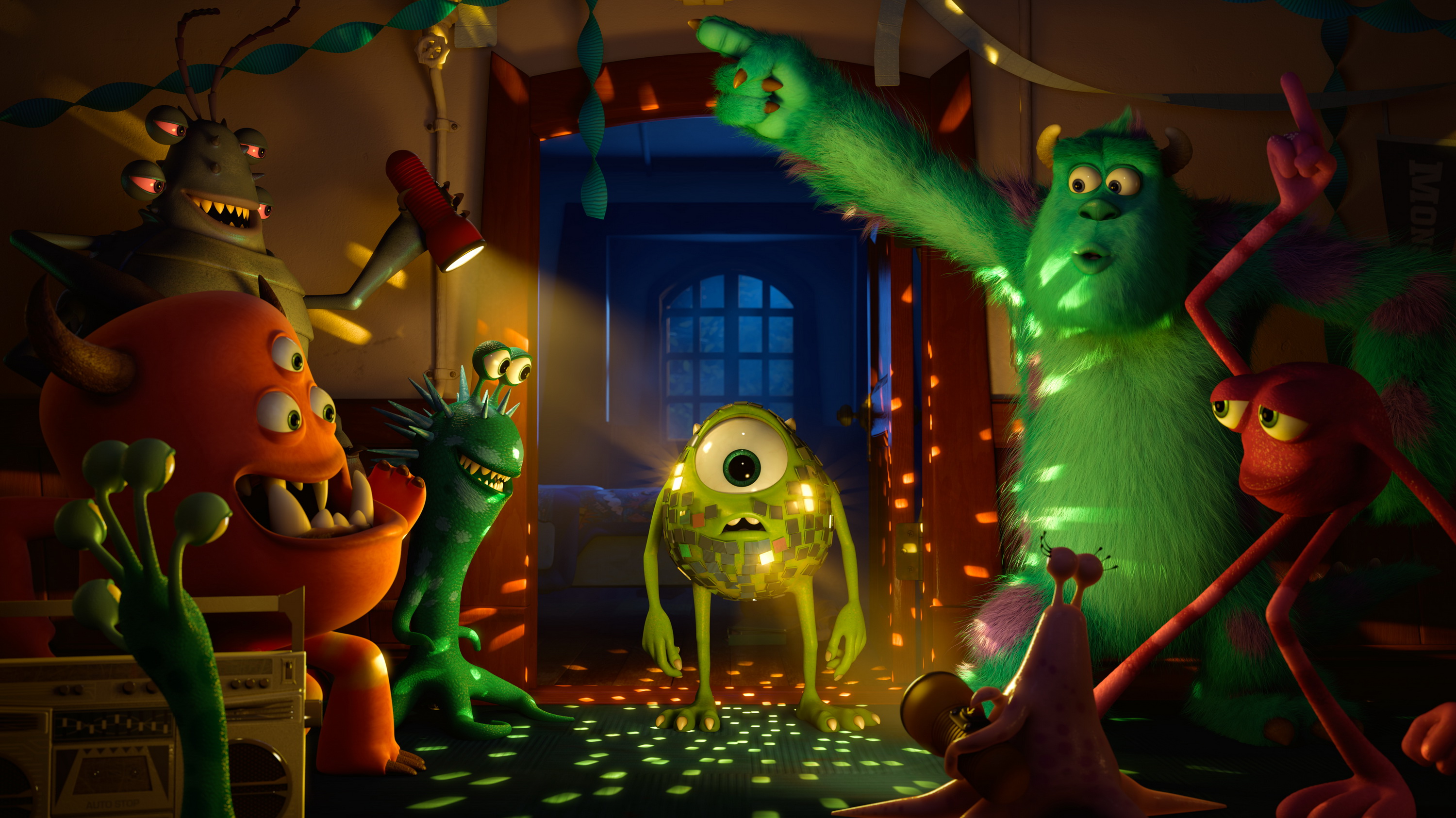 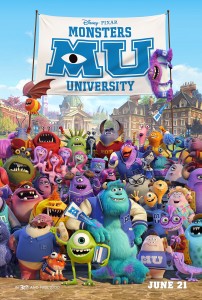 Leave it to Pixar to deliver a movie that is not only fun, but honest in a way most films for kids tend to avoid. When movies aimed at the younger set skew the truth in order to make everything turn out in the best of ways for the main characters it is hard to sometimes take the lessons it is trying to teach with more than a grain of salt. Now, given the fact we know where the story of Mike (Billy Crystal) and Sully (John Goodman) eventually ends up it is not without surprise it was an adventure getting to that point, but what is slightly surprising is the way in which they so effortlessly stumble upon their careers in a world that’s been completely imagined and realized through technology. This authenticity of the world created for these movies lends itself well to the lesson here that you aren’t always going to get what you want no matter how hard you work, but instead the cold truth has to be accepted and in some ways you come out stronger and more proud having admitted and come to terms with your own weaknesses. Though the idea of hard work always paying off is a nice sentiment and in a perfect world might be true, the real world doesn’t always allow our dreams to pan out the way we hoped and so we have to adjust to fulfill the potential of the hand in which we were dealt. That all may sound somewhat insightful given the fact the point of discussion here is an animated film, but that is what continues to set Pixar so much further ahead of the pack. Sure, they’ve had their missteps over the past few years as no one was asking for a sequel to Cars and despite the fact I found it gorgeous and engaging the majority of audiences and critics weren’t too pleased with Brave. Monsters University may not be the return to top form the majority of people are hoping it will be, but by this point the bar is so ridiculously high for Pixar it is almost unattainable. On the plus side, this prequel to 2001’s Monster’s Inc.is a hilarious and colorful adventure that will have the kiddies in stitches and the parents chuckling at all the references and college humor their children are too young to even comprehend.

I was fourteen when Monsters Inc. arrived in theaters and despite me being right in the middle of the age range where I should have believed I was too old for that kind of thing I was already fully aware of the magic Pixar was beginning to work with Toy Story premiering and breaking all boundaries when I was ten and the studio subsequently following that feature up with A Bug’s Life and Toy Story 2. The bar was high at that point and the best was very much yet to come, but Monsters Inc. proved that it was all about imaginative storytelling and with that idea planted firmly in my mind I went into Monsters University with the hope that getting to really know Mike and Sully at an earlier point in their life might prove just as engaging as getting to know their world in the first film. As a prequel we knew not to expect Boo to pop up anywhere and that this wouldn’t be more of the same, but instead would be like having the opportunity to go back in time and see what your parents might have been like at your age. At least, me being the age I was when the first film came out and how old I am now I felt this carried a “behind the curtain” tone in which we were able to peel back the layers of who they’d become to see what made them that way, what shaped them into the adult “scarers” we came to love so much in the original. To do that director Dan Scanlon has placed Mike and Sully at the titular institution and given the spherical cyclops the brains and the woolly mammoth the charm and looks it takes to make it in a world of monsters depending on screams to survive. While both protagonists face equally challenging obstacles to get to where they ultimately want to be their biggest challenge ends up being getting along with one another and putting their pride aside to realize they will be stronger as a team rather than as enemies. While the story takes a turn for the familiar as the guys join a nerdy fraternity who must win an annual set of challenges to earn their place in the scaring department which has echoes of Revenge of the Nerds it is ultimately the characters that raise the quality above the conventional.

In saying that is to pay a huge compliment to the cast that brings to life and no doubt inspired some of the looks and movements the animators put into each of their characters. Billy Crystal and John Goodman have great chemistry with one another that, while it doesn’t really show up until about half way through the film, once it does you begin to recognize it immediately as those same guys who were such good friends in the original. While that was going to be a given, there are plenty of other voices and creative character designs that pop up here to infuse the proceedings with consistent laughs while the specifics of the characters are not so much types as they actually feel like individuals who are above the standard arc the story takes. That isn’t to say the point the film is trying to make shouldn’t be considered or understood, but the way the filmmakers go about conveying these ideas is what disappointed more than anything. Reverting back to what brings it up though are the multiple characters we are introduced to and come to know as if having an off hand friendship or familiar acquaintance with each of them. Helen Mirren provides the voice for Dean Hardscrabble a frightening dragon-like creature who sent chills through me every time she moved. Not only does she not believe Mike or Sully have what it takes to become “scarers” but she also takes every step possible to do away with them, but the powers that be allow every cliche of an underdog rising up to take on the man scenario to seep in and save Mike, Sully, and their gang of misfits from ever being in any real danger as far as the crux competition goes. The remaining members of the fraternity Mike takes over in an attempt to keep his spot in the program are filled by Charlie Day doing some truly funny work as Art along with Sean Hayes and Dave Foley bringing life to two-headed monster Terri and Terry. Peter Sohn is genuinely lovable as squishy, the one who convinced his mom to let him start a frat in their house while Don (Joel Murray) is the older student who’s returned to school after what he thought would fill out the remainder of his life disappeared. These individuals along with other small, but pleasing spots from Alfred Molina, Nathan Fillion, Aubrey Plaza and Bobby Moynihan bring a vibrant beat to the predictable ones the script takes.

Many of those who will be let down by Monsters University will feel this way seemingly because this film is nothing if not pure sugar. Yes, it does offer alternative programming in terms of delivering the idea to the kids of a generation where everyone is afraid to label anyone a loser that no matter how much you might want something or how hard you might work for it doesn’t guarantee you’ll get it and it certainly doesn’t mean you’re entitled to it. The film is so colorful and so technically accomplished though it will be a wonder if anyone under the age of ten even picks up on any of those ideas or lessons. What they will see are the colorful creatures, the funny jokes, and the connections to the first film. Steve Buscemi does show up here with an underdeveloped arc on how Randy goes to the dark side, but what really separates this from the Pixar films that will go down as great is the lack of an emotional weight. Toy Story takes on the themes of growing up and accepting change,Wall-E was a social commentary on where we might end up if caution continues to be thrown to the wind, whileThe Incredibles, Finding Nemo, and Up all had different takes on family, love, loss, and finding one’s place in the world. In many ways Monsters University offers that real world take on believing in yourself and following your dreams that Ratatouille displayed so well by going the extra mile to say not to judge a book by its cover. That is what Mike is asking everyone around him to do here, he wants his talent to be recognized and for his instructors and peers to think outside the box, but while this may have proved successful for Remy, Mike cannot escape the simple fact that his talents are limited to the point that what he wants to do is not something that can be learned and that he was not naturally gifted with what he needs to succeed. The problem the film faces is finding an effective way to get that point across. This is light-hearted Pixar that is fun to watch and completely enjoyable, but it is simply nothing more than good while what we expect from this illustrious studio is nothing short of greatness.