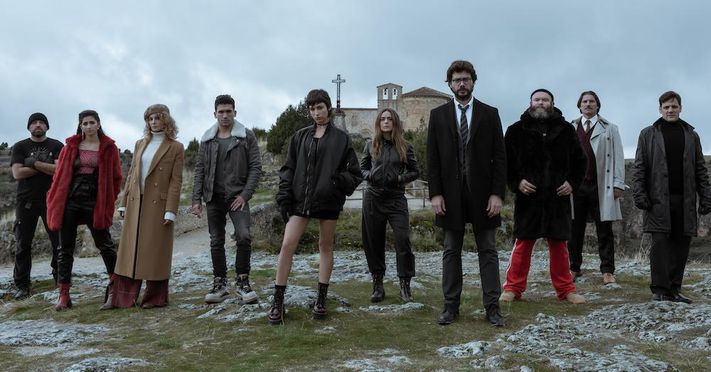 The third season of the popular Netflix series Money Heist started on 19 July. To mark the occasion, the short-term credit provider Vexcash [1] delved into the subject of cash and forgery, and its associated costs.

The bank robbers in the show want to forge a total of €2.4 billion
(£2.17 bn) in 50 euro bills, which they would produce themselves in the
Spanish banknote printing works. This would correspond to 48 million
notes weighing a total of 44.2 tonnes. The thieves, however, only manage
to forge €984 million (£889 million), making away with around 22
tonnes of cash, equivalent to the weight of five adult elephants.

In 2018 alone, a total of 4 billion 50 Euro notes worth €13.1 billion
(£11.9 bn) went into circulation, the equivalent of around 12 new
banknotes per inhabitant of the Eurozone. These would fill almost 6
million football pitches and weigh more than 3,800 tonnes, equivalent to
the weight of over 860 elephants. Stacked up, the bills would reach a
height of 479 km, or 54 times Mount Everest.

Newly printed banknotes not only weigh several tonnes, they also cost a
significant amount to produce, with the 4 billion 50 Euro banknotes
officially printed for the Eurozone in 2018 costing around €319m
(£288m). The €2.4 billion forged in the series would cost around
€1.6 million (£1.4 million) to produce.

TOKYO, NAIROBI, RIO: WHERE WILL THE CASH LAST LONGEST?

The show’s followers will probably never know which of the criminals
would be the first to completely spend their share of the loot. But
Vexcash has calculated how many years Tokyo, Nairobi and Co. could live
in the cities of their aliases after an escape.

The money would go twice as far in Rio and Nairobi: it would take 9,700
and 10,400 years to spend it in the respective cities. In Thailand, one
of the trading locations in season 3, the money would last  7,800 years.

THE COST OF TRANSFERRING THE LOOT

In reality, it would be almost impossible to smuggle €984million
(£889 million) in cash through border controls. A bank transfer,
meanwhile, would cost a small fortune.

The average fee for a £50,000 transfer to Thailand is £767. Smuggling
the total amount would cost an additional £16.6 million (£15 million).
The big catch here: such a large sum needs to be proven.

FURTHER INFORMATION CAN BE FOUND AT:
www.vexcash.com/blog/on-time-for-the-new-season-of-money-heist/  [2]

ABOUT VEXCASH
Vexcash AG is a provider of instant loans based in Berlin, founded in
2012 and belonging to the Latvian 4finance Group. Via the Vexcash
website, users can submit a loan application, which is usually reviewed,
approved and paid out within 60 minutes, provided the credit rating is
adequate.