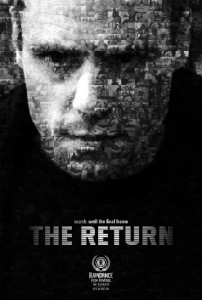 ‘Everyone’s got a secret, you know? Something they hide. When you think about it, there’s not a single exception’. For the troubled few that end up on the wrong side of the law, the informed masses inevitably become inquisitive. What drives a person to become so desperate? What crucial factors end up dictating such a tortured thought process? Adding a psychological layer to the gritty familiarity associated with the gangster genre, director Oliver Nias makes the transition from music video to the big-screen with ‘The Return’.

Vigorously working the UK independent festival circuit already (Nominated for Best Feature at Raindance a notable mention) and possessing an immaculate monochrome 35MM aesthetic, Nias’ intentions are clear from the outset. Blend the grounded small-scale sensibilities of everyday London with a taut yet intriguing narrative tapestry.

The film predominantly revolves around gruff criminal Jack (Sam Donnelly) returning to the scene of various crimes, with the emotional repercussions of one familial tragedy three years ago still being felt. He’s an outcast down on his luck, whilst he finds his once partners-in-crime morally are on the up, now acclimatised to family life.

Setting his sights high by targeting the wealth of the capital, now without the street smarts of Manny (David Elliot) and the intelligence of close pal Si (Johnny Fairclough), Jack is soon embroiled in the pleasures of an unlikely relationship with the well-to-do Laura (Amie Burns Walker) and the potentially harmful business of bringing down the notorious Duke (Robert Goodman).

The steady pans and extreme close-ups as Nias surveys the unsettling scenes and captures the strained facial expressions of the protagonists. The Return’s inquisitive (Are you a thoughtful person? Would you cheat in a game?) and almost ‘surgical’ approach as the jigsaw pieces of the tightly-plotted premise assemble, intertwined with its refreshingly restrained and slow-burner pacing, provides a compelling insight into what lays the foundations for such a corrupt path.

Steely in his engaging narration that merely compliments the conviction of his overall performance, Sam Donnelly brings real gravitas to the troubled Jack, making him an unlikely empathetic character within such a realm as he bemoans the suggestion of great differences between his seemingly average self and a guy in a suit. Amie Burns Walker excels in her role as the mysterious Laura, with her initial ‘What Am I’ meet-cute with Jack an outstanding highlight, whilst the well-judged intensity of Robert Goodman’s Duke avoids the cartoonish tendencies that are often instilled in villains of this genre.

Its stripped-back nature may allow the energy to flag sporadically mid-section. Yet The Return is a beautifully-shot puzzle of a directorial debut by Nias, complete with a thrilling and revealing conclusion that may just demand a repeat viewing.