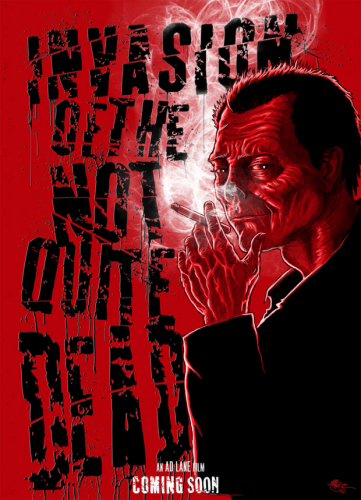 A passion project that has been simmering away in the mind of its director Crazy D Lane for well over a decade, he has poured his heart and soul into debut feature ‘Invasion Of The Not Quite Dead’, whilst spilling an exceptional amount of blood in the process of making this admittedly grisly horror offering.

Its premise that intertwines the influence of the genre offerings of the 1970’s and 80’s along with the grit often associated with British cinema, the film is based in the desolate village of Little Grimsby, as Frank Jakeman’s (attached to the project since 2009!) Sam Peterson looks to mend his fractured family. Sadly for Sam, the familial tensions pale in comparison to the deadly virus that is sweeping the town…

A heavy emphasis on practical FX whilst looking to tackle the delicate subject matters of mental illness and domestic abuse through its lean narrative. The project is shaping up to be a far cry from a traditional zombie film, a tag director Lane is rather keen to steer clear from, looking to retain a refreshing sense of mystery for the film’s lingering threat.

On the brink of realising his first feature film, we at Movie Marker are happy to highlight the current Indiegogo campaign, which is running for Lane’s project.

Looking to raise £10,000 to drive the film into its desired post-production phase, the film’s intentions through its relentless and impressive promotional campaign have already been praised by the likes of Sam Neill (Jurassic Park/Peaky Blinders) and Saw regular Donnie Wahlberg.

You can BACK the film with all its cool perks whilst garnering a proper sense of the thrilling, intense vision Lane and his committed production team wanted to give audiences with ‘Invasion Of The Not Quite Dead’, by visiting their Indiegogo page HERE!

In addition, we have a deeply unsettling teaser of the film for you to check out below!

Related Topics:Crazy D LaneHorrorIndiegogoInvasion Of The Not Quite Dead
Up Next