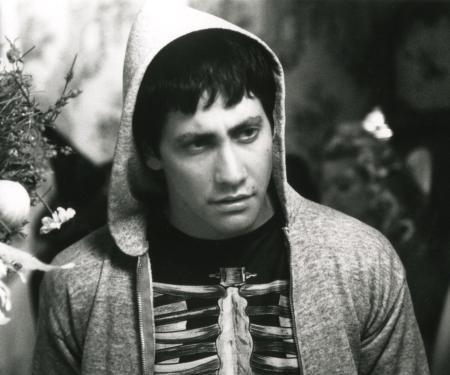 Director Richard Kelly is almost a forgotten commodity in today’s Hollywood. A victim of his own success after entering the directorial fray with such an audacious debut, he’s never quite reached the giddy heights achieved on his first attempt. Futuristic ensemble piece ‘Southland Tales’ whilst appreciated personally, was deemed a sprawling mess. Meanwhile ‘The Box’  starring Cameron Diaz and James Marsden left many dumbfounded. 12 years on, it’s time to revisit the cinematic gem that kick-started the director’s career.

October 2001.. Donnie Darko was unleashed into multiplexes triggering a domino effect of uproar. Turning the air blue most emphatically.. the US. Kelly had to bear the brunt of the criticism, no thanks to one sequence in particular bearing a striking and unintentional resemblance to the horrific 9/11 atrocities a month earlier. With a key plot point involving the bizarre occurence of a ‘jet engine’ crashing into the confines of Donnie’s bedroom, the film unfortunately got pulled from cinemas across the board and was immediately deemed a risible cinematic failure. Resigned to only play as a ‘Midnight Movie’ for a duration of 2 years, a hardcore legion of fans steadily growing in size embraced ‘Darko’ and his peculiar story. A decade later and now consistently declared a ‘cult classic’, just what is the underlying appeal of Jake Gyllenhaal’s ‘Donnie’?

‘Destruction is a form of creation’. The one-liner that may bear no initial heft during a classroom scene involving Drew Barrymore’s Miss Pomeroy and Donnie. However, it proves to be the key notion pumping through the film’s veins and Kelly’s mind. The director deconstructs various genres subverting audience expectations in the process, whilst at the same time hybridising them creating one unique and enthralling vision. Self indulgent or masterstroke.. Delete as applicable!

Solidifying its cult status by interweaving the two most accomodated genre types (Science Fiction and Horror), the element of time travel coupled with a terrifying bunny rabbit called Frank and Grandma Death proved to be a potent mix. Adding to its diversity is the weight of an apocalyptic threat Darko is forced to carry on his shoulders, along with the uncertainty of being in a fit mental state (cue hallucinations).

These notions could easily be linked to the comicbook genre. The name alone ‘Donnie Darko’ wouldn’t look out of place on a Marvel/DC Comics cover and is perhaps deliberately eluded to by girlfriend Gretchen muttering the words ‘You sound like a superhero!’. The simmering of teenage angst as he struggles to deal with Frank demanding him to commit such dastardly acts on the surface whilst trying to retain a sense of reality through high school,  is also a neat twist on the phrase ‘With great power, comes great responsbility’.

The demographic who took ‘Darko’ to their hearts, are most certainly teenagers (like myself at the time of first viewing). From the Fear-Love assignment to the meticulous dissection of Jim Cunningham’s (Patrick Swayze) school presentation and self help videos, Darko serves as a martyr for challenging the conformity of the more generously aged members of the school, who attempt to fabricate and compress the feelings of every teenager. Whilst incoherent in his own thinking, being immersed in such a troubling world adds unsettling credibility to Darko’s outlandish remarks.

If Kelly’s ambitions weren’t hefty enough, there is a religious undercurrent to ‘Darko’. Admittedly the visual motifs are quite passive in nature. We have buillied Chinese student Cherita bearing wings during a school production like a ‘guardian angel’ and ‘acknowledges’ Darko’s first mention of ‘time travel within God’s channel’. A book based on time travel passed onto Donnie by Noah Wyle’s professor bearing the look of the Bible itself, a local cinema showing ‘The Last Temptation of Christ’ as he prepares to lay waste to Cunningham’s house and with himself providing the ultimate ‘sacrifice’, the comparisons to biblical tales are inescapable.

With a unconventional narrative structure befitting of similar cinematic releases in the early noughties (Christopher Nolan’s Memento), a story bursting at the seams with pop culture references and originality set to an inspired 1980’s soundtrack and a mysteriously endearing lead protagonist, ‘Donnie Darko’ i’m sure will continue to fascinate for many years to come.

Considine Preparing For ‘The World’s End’!