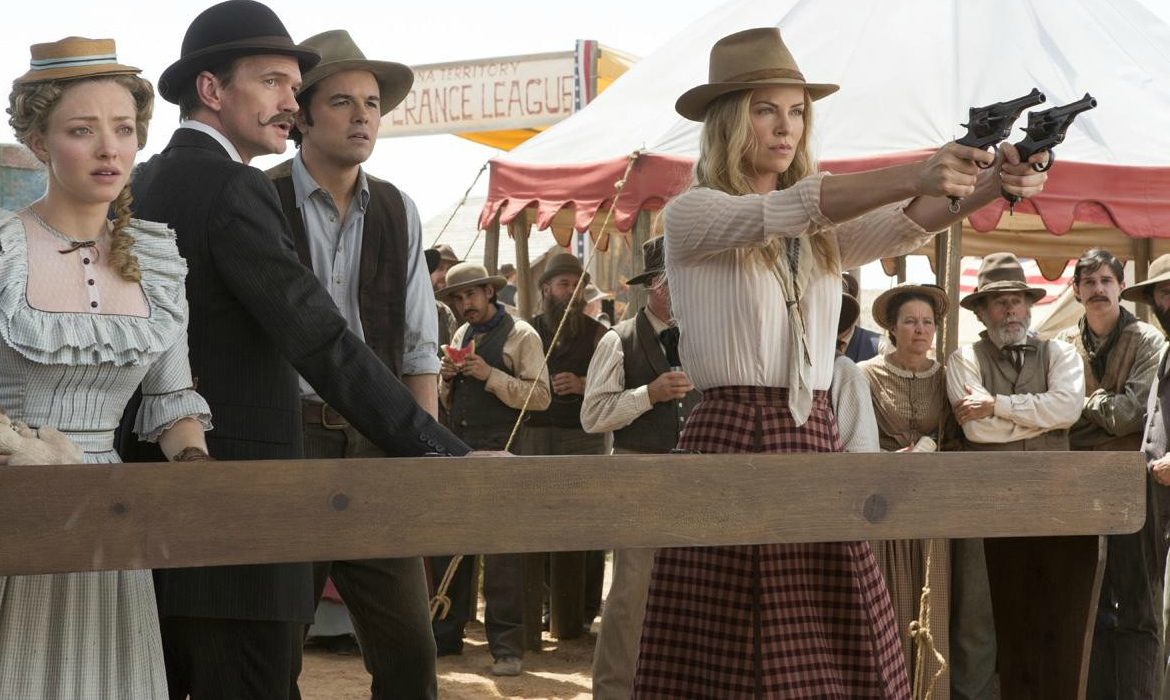 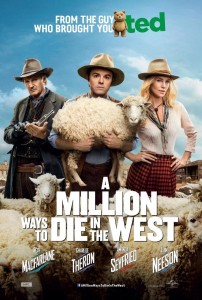 There is always a sense of trepidation within me when approaching a Seth MacFarlane comedy as I’ve never been a fan of Family Guy or any of his other animated outings. This is not necessarily because I don’t like them, but because I’ve never really become interested enough to actually sit down and watch them. I realize this isn’t MacFarlane’s fault and that I might actually appreciate his brand of humor if given the chance. That is almost what happened after seeing Ted two years ago and being surprised by how much I actually enjoyed and laughed at the outrageously broad comedy. I say almost because I still never watched a single episode of any of his television series’ or Star Wars parodies, but instead I looked forward to what he might do next in an effort to sustain the good will he received from Ted and bring to the big screen another one of his ridiculous premises only to have it hit with a certain, under-appreciated crowd. MacFarlane makes it clear throughout his latest feature in which he stars, directs and co-wrote titled A Million Ways to Die in the West that he is the underdog and always has been. He seems intent on making very clear not only that he is accustomed to playing this role in life, but that he truly embodies in Albert, his character here, the kind of person it takes to become the guy who’d rather talk things out intelligently than put up their dukes. In fact, he’s learned from his no frills father that life isn’t easy and so he resorts to ridiculing everything and everyone around him while ultimately feeling like he’s never good enough. There is nothing wrong with this and as a general consensus I imagine audiences will agree with his tactics, but it is also made clear that Albert is better than you and he knows it, but he can’t bring himself to say it to your face. It’s a tough position to be in and an even tougher attitude to pull off when preaching to the crowds that will flock to see this in hopes of another original comedy. The thing about MacFarlane’s comedy (and again I’m only speaking from the experience of having seen this and Ted) is that while he condescends and outsmarts his opponents the majority of the time he never makes us, the audience, feel as if we’re in on the joke with him, but instead that we are as stupid as those he is talking down to.

This kind of narcissistic mentality can be glimpsed simply from the premise of A Million Ways to Die in the Westas the entire point of the movie in essence is to look down on the era of the American West and how terrible it was. This seems kind of ironic to MacFarlane because he clearly feels that what you would refer to as “tough guys” today might see the opportunity to live in the old west as something awesome and to that notion he slaps them in the face repeatedly with how stupid they would have to be to actually want that. John Wayne, James Stewart, Henry Fonda, Paul Newman and Clint Eastwood have all made the western look so badass that it would seem an attractive thing to do, but while MacFarlane is out to show just how meat-headed a notion this actually is what he does in turn is basically create a gross-out romantic comedy because, well, that seems to be his default. We first meet Albert as he is set to face off against his neighbor in a gunfight to which he responds by miming a blowjob with their shadows and then expertly swindles himself into paying over what he owes his challenger in the money he lost when Albert’s sheep ate off his land. You see, Albert is a sheep farmer and not a very good one at that and after a year and a half together with his girlfriend, Louise (Amanda Seyfried), she decides she wants more out of life. Albert is heartbroken, not knowing what to do with himself, hating his pre-determined destiny and only finding solace in the company of his best friend Edward (Giovanni Ribisi). Edward is a bit of twit as he’s dating one of the town whores (Sarah Silverman) who forces him to wait until their wedding night to have sex, because they’re Christians of course and they needed a running joke to beat into the ground. Things start to change when Anna (Charlize Theron) shows up in their small town though, finding someone to root for in Albert and a way to escape her reality of being married to the deadliest man in the west, Clinch Leatherwood (Liam Neeson). Anna is mysterious yet interested and Albert isn’t one to ignore a pretty lady, especially one who shows so much interest in showing up ol’ Louise after she publicly sports a new beau in Foy (the always wonderful Neil Patrick Harris). It is when Clinch catches up with Anna and things come unspooled that Albert must face his fears and claim his girl or remain a coward and never know what might have been or some sort of BS like that.

The point is, we all know where the film is heading as soon as Neeson’s character is introduced and so what we expect is for the ride to be fun and enjoyable even if it is predictable. Unfortunately, what MacFarlane has put together is a string of set-ups for jokes that have no real context within the film but simply exist in the hopes of getting a laugh. As the film opened I was already smiling because of the fact the actor/writer/director found it necessary to allow his credits to scroll openly at the beginning of the film against the beautiful backdrop of aerial shots of Arizona desert as the great, throwback score from Joel McNeely (not to mention the fun closing credits song by Alan Jackson) plays over it all. As soon as we settle in and ready ourselves to laugh though we are met with the opposite approach the credits implied as MacFarlane doesn’t operate his cameras in a way that mimics those of the old westerns nor does he even bother to try and make himself look like a person of the time. There is no aesthetic except for blandness. The extras and a few supporting characters sport fangled teeth and unkempt hair with dirt seeping out of every pore while MacFarlane and his other, well-renowned co-stars look as polished and kept as they would any day of the week walking through a studio back lot. MacFarlane doesn’t care that his hair is styled or that the food he eats in the second scene of the film looks straight from a grocery store, no, all he seems to care about is if the jokes land. While the point of the film is to be a parody of the way of life in that time in history the only time these type of topical jokes come up is when Albert explicitly states why things suck so bad in the west. Other times, situational times, we simply get sheep penises or fart and diarrhea jokes that not only feel sophomoric, but extremely forced given the intelligent and thoughtful analysis that come from our protagonists mouth at other points. I was hoping that not only would A Million Ways to Die in the West be a smartly satirical take on the old west and expectations vs. reality and I genuinely believe that is what MacFarlane set out to do when this idea first popped into his head, but what his final product ends up delivering is a conventional studio comedy with high-brow ambitions and low-brow humor. At least there are the celebrity cameos, but spotting the who’s who among the extras almost becomes the most enjoyable thing about this predictable ride.

Despite all of this, and even considering the lowered expectations given the quality of the jokes in the red band trailers I was hoping this might turn out to be something more, something that might actually force me to finally fully jump on the Seth MacFarlane train. More than anything though this has derailed any interest I had in further investigating his filmography. The worst part, really, is that MacFarlane just wasn’t made for live action work and that seems to be the harsh truth no one around him wants to tell him. I get it, this is his first time actually being in front of the camera and comedy is the hardest of genres to pull off and convey in a naturalistic manner, but it is his performance that does more to discredit the film than anything else. We are not accustomed to his mannerisms or his odd facial features that can’t help but make us wonder what nationalities his parents were while the fact we feel the need to better familiarize ourselves with actually seeing the real-life MacFarlane on screen is not a good sign as he can’t seem to match his quick wit and delivery with his body language. His body language feels awkward throughout, he is unsure of how to put into physical form the kind of frustrations or comedic elements he needs to in order to emphasize his lines and we can feel it, for the first time we can see it. The good news is the guy has wrangled up a strong cast of credible supporting actors that help the film stay afloat if not making him look all the more amateurish. As Anna, Theron is just as modernized in her approach as MacFarlane is to Albert yet there is a charm to her shtick and we immediately like her not because she is the opposite of what we expect a woman in the old west to be, but because Theron is inherently intimidating with her beauty and uses that cocky facade here to impress upon others she is not one to mess with. Ribisi and Silverman do fine with what they have to work with and the running gag about the Christian prostitute is pretty solid, but it runs out of steam so fast and there is nothing for them after that. Neeson is here because Liam Neeson playing an outlaw is a funny idea while Harris all but steals the show every time he walks on screen. On the other hand Seyfried, who showed so much comedic potential ten years ago in Mean Girls, offers absolutely nothing here in a role that could have literally been played by anyone else. Seriously, her funniest moment on screen is when someone else makes fun of her. All of this to say that A Million Ways to Die in the West is a bit of a disappointment and only at its best when we’re in on the joke and not on the outside wanting, but not being allowed in.

Heaven is for Real