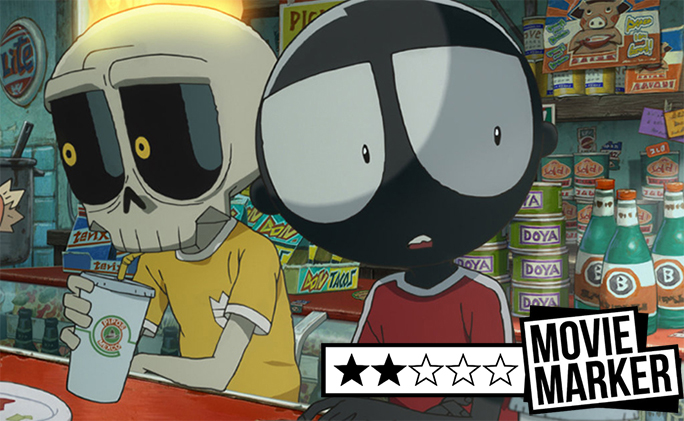 There’s a moment in MFKZ (also called Mutafukaz) in which large, red lettering appears on-screen and demands to know “WHAT THE FUCK IS GOING ON?”, and it’s astounding how apt that moment is in summing up the entire viewing experience.

Taking place in the fictional Dead Meat City, located in New California of course, MFKZ follows a bug-eyed, all-black diminutive creature called Angelino (‘Lino’ to his friends Vinz, a pale fellow with a flaming skull for a head, and Willy, a whiny cat-boy with braces) as he finds himself in a scooter accident after a chance encounter with a beautiful girl. Said accident soon leads to him becoming a wanted fugitive – on the run, and hunted across the city by a secret society that touches the deepest recesses of every corner of the globe.

MFKZ is, frankly, just bizarre. It really, desperately, wants to be subversive, random, and special, but it just plays like the fever dream of someone listening to the Gorillaz and watching The Mighty Boosh whilst really, really baked. There’s no wit, no deeper meaning to MFKZ, and that’s not to say that all works of art need to have some deeper layer on which to be examined, but MFKZ fails as a work of narrative fiction.

The hip-hop infused world of Dead Meat City – dripping with gangbangers, ambience, and filth – is the highlight, but even it is ill-defined; the internal logic of the city never fully explained, despite certain plot developments hanging on that same logic. Indeed, it doesn’t come as a shock when one eventually learns in the closing credits that the feature is based on a manga of the same name – where no doubt more of the lore could be filled in for clarity.

The animation, as directed by Shojirou Nishimi and Guillaume Renard, is never less than impressive though; a brilliant fusion of Japanese Anime and European cartooning that makes every frame unmistakably unique. The soundtrack, similarly, is phenomenal – all thumping baselines and gangsta rapping, layered over action ostinatos that pulsate with rhythm and energy. But it’s all in service of the thinnest narrative possible, with no real structure and a scattershot collection of scenes and ideas that never come together.

The voice actors all give it their best shot, with Tay Lee and Mark Ryan Haltom doing their utmost with the weak material as Lino and Vinz, and their chemistry even occasionally threatens to raise a smirk. But the weak link is undoubtedly Ray Chung as Willy, whose grating voice simply doesn’t mesh with the grittier world around him – imagine dropping Squanchy from Rick and Morty into an episode of The Wire, and you’re somewhere close.

MFKZ should be barrels of joy. It has the descendants of an ancient Mayan warrior clan masquerading as Lucha wrestlers to pay the rent, Shakespeare-quoting shirtless thugs who fight the men in black, and a secret race of tentacle monsters who control the world. But for all its would-be fun ideas, one can never escape the feeling that the film is simply throwing shit at the screen and hoping some of it sticks.

Too slow to function as an enjoyable action flick, and not funny enough to class as a comedy, MFKZ should be avoided by all but the most dedicated students of animation.

MFKZ will see a limited release in selected UK cinemas this Thursday, rated 15.