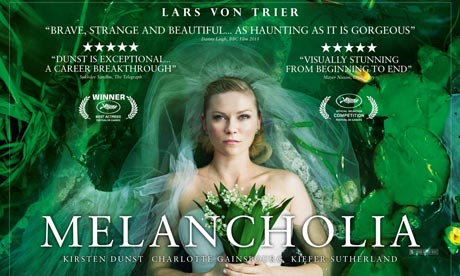 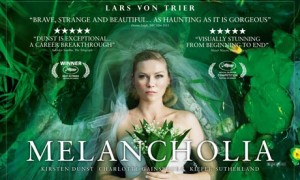 Director Lars Von Trier has never taken the easy route. Films such as Dogville, Dancer in the Dark andBreaking the Waves have demanded plenty from viewers with no promise of anything reassuring in return. But when news first came out that Von Trier would be making an end of the world disaster film with Kirsten Dunst and Kiefer Sutherland people wondered whether he had gone all Hollywood.

The good news is that Von Trier fans can rest easy. Apparently he has said that this film will be the no more happy endings film, which considering his previous output, is some statement. Melancholia stars Kirsten Dunst as Justine, a woman who is heading to her wedding reception in an opulent castle paid for by her brother-in-law John (Kiefer Sutherland). The whole wedding sequence calls to mind Danish filmmaker Thomas Vinterberg’s Festen in tone. It also has a strange pre event feel, a kind of a sour version of the opening wedding in The Deer Hunter.  Needless to say, there is severe unhappiness at the reception, with Justine leaving at regular intervals, and her mother (a wonderfully vicious Charlotte Rampling) shooting barbed comments across the tables. Added to this is Justine’s sister Claire (Charlotte Gainsburg), desperately trying to stop the wedding spiralling out of control. The whole wedding sequence encompasses roughly the first half of the film and sets up the tone, characters and situation for the rest of the film. The first half is entitled Justine, reveals that she suffers from depression, and as said by her throughout the film in various ways, both in words and looks, what is the point?

This leads us into the second half of the film which focuses on the discovery of the blue planet Melancholia and its closeness to earth. Claire frantically searches the internet for information from people who think Earth is doomed despite being told by scientist husband Jack that it will miss the planet. Justine, still suffering from a depression, arrives at the house to stay with them. All is set for an apocalyptic showdown. The most interesting point about the second half of Melancholia is how tight the story is woven around the central characters. It is the end of the world but we spend it with just four people. Rather brilliantly Von Trier dispenses with the clichés of this kind of film such as the large populace in different worldwide cities waiting (no standard Times Square, Great Wall shots) for the end, or doom laden news forecasts which generally serve for plot exposition. It is in this regard that makes Melancholia original and unusual.

The film also begins with a stunning slow motion sequence to thunderous classical music. The prologue ends with Earth crashing into a planet. This sequence calls to mind Terence Malick’s The Tree of Life in its beauty and gives the impression that only ambition, or lack of it, stops Von Trier from showing his unbelievable visionary skill as a filmmaker. Acting wise, Dunst makes the most of the demands Von Trier has put on her with a superb performance. Gainsburg is also brilliant as Claire with Kiefer Sutherland also holding his own. There are two great cameos from John Hurt and Charlotte Rampling as Justine’s and Claire’s but these are unfortunately very brief.

Overall, Melancholia is a quite brilliant film. It will mean different things to different people but one meaning that shone through was that depression and ennui can claim anyone, regardless of money and status. The planet crashing towards Earth seems to be a release for the people who suffer. You don’t get that in Armageddon.