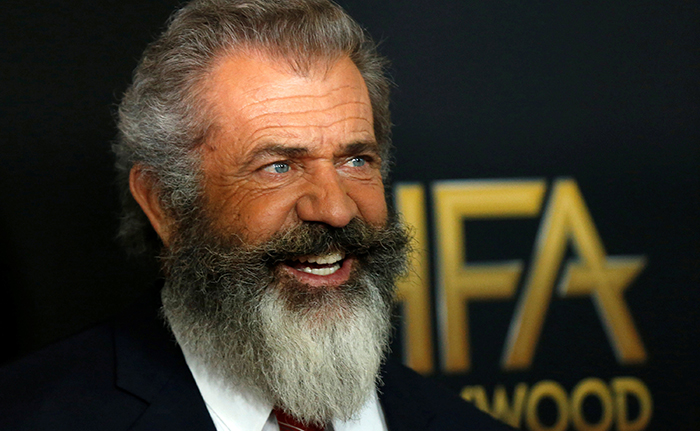 Wild-eyed anti-semite, and ‘uncle you really wish would stop coming to these events’, Mel Gibson made a surprise appearance at the Egyptian Theatre in Hollywood last night to promote his new movie Dragged Across Concrete.

Two weeks ago, Mel Gibson was announced as the director of a remake of the classic Sam Peckinpah western The Wild Bunch for Warner Bros., and spoke briefly about the forthcoming film:

“I thought it was a bad idea at first,” Gibson admitted, “Why make The Wild Bunch again? Who would do that? I thought about it and I thought about it some more, and then I thought of a way; a way to tell the story. So I’ve been sitting in a room with a writer and it’s been a blast. So it started as a bad idea, but it’s heading toward something that could be special. It’s about last chances and guys with lives of accrued violence … Those guys? They laugh a lot, but it isn’t funny.”

The writer Gibson mentioned is Bryan Bagby, and the feature will tell the tale of a group of legendary criminals looking for a final score during the twilight days of the great wild west. The Wild Bunch will be Mel Gibson’s first stab at directing since Hacksaw Ridge (back in 2016), which starred Andrew Garfield, and for which Gibson earned an Oscar nomination.

No shooting schedule or release date has been finalised.