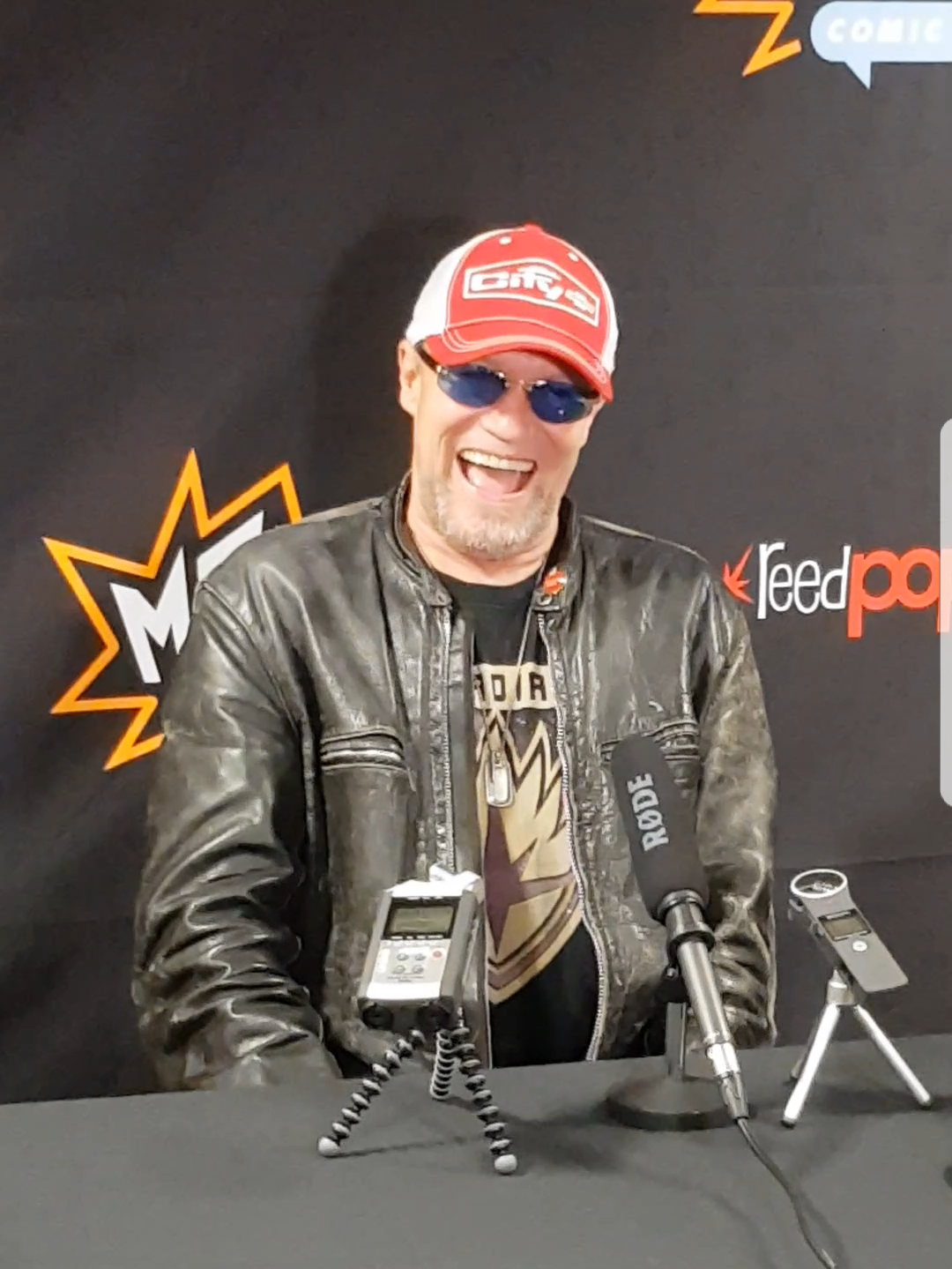 Thank you. I had a good time yesterday in Birmingham. I went downtown and I walked around. I went to the casket museum. They didn’t look that comfy though – I was hoping to see one that was calling my name, something I could lay down and stretch out in. You know what they were like? First class seating in a major airline. All narrow. You have no room – you’ve got plenty of leg room but no shoulder or ass room. You gotta be able to spread out with comfy and soft cushioning.

So did Yondu have more room in his?

Oh indeed he did.

Of all the great characters that Marvel’s given us…Yondu seems to be an instant fan favourite.

Well, the second film was an absolute continuation of the first. If you watch them back to back…you can watch them without any kind of issues. They really, really flow and work very well as one continuous film. I remember us talking about things in the first one, y’know, back story and motivational things, why Yondu would want to do a certain thing or not a certain thing.

In the second one, a lot of the backstory we talked about developing in the first one, ended up being actual manifest in the second one. Which was very cool to see. You don’t usually get the opportunity to do that as an actor. You don’t get to talk about the development and maybe talk about what’s going on backstory and then do another movie and actually get to do it. That was very cool.

Do you find a new generation of younger people coming to your work now? They won’t be familiar with things like Henry: Portrait of a Serial Killer. They’ll be more familiar with Yondu from Guardians of the Galaxy. Have you seen your fan base change?

My fan base has changed quite a lot, especially with my casting in The Walking Dead. You’re on the tube, the TV and you’re there every week and you become sort of a household name. That’s what happened with The Walking Dead. Merle Dixon was quite a fun role for me. A very politically incorrect kind of guy. He’d almost say and do anything, practically. You were very into Merle Dixon, I’m not sure if you would be for Merle or against Merle. Whatever you thought about him, whenever Merle Dixon was on screen, you were glued to the screen. It was very cool to get a lot of younger fans and a bigger fan base because of that show and that’s just continued.

After leaving that show I went on to do Guardians of the Galaxy which is a highly popular film. And then Vol. 2 of course. Very similar events happen from The Walking Dead: Merle Dixon dies in a very heroic stance and the same thing happened in Vol. 2. They had very similar responses from fans. They cried, they were upset, a lot of emotions went through both of those characters’ deaths and because of that I got a whole other group of fans. It’s very interesting how your career changes grows and develops and I’ve been very pleased and very happy for those changes.

Did you have this feeling that The Walking Dead was going to be a big hit?

Yes. The Walking Dead was, well, not before I was cast. Even before I had been cast, I thought “I don’t know if Middle America is going to dig this”, but boy, oh boy they did, and they enjoyed it immensely. I was very surprised by it and pleased.

The goodbye scene between Peter and Yondu really hit people because it was very emotional and one of the only proper deaths in the Marvel Universe. Can you talk about working with Chris on both that scene and some of the more comedic scenes?

The Mary Poppins line was a fan favourite and honestly, Chris sets that up extremely well. Without Chris’ comments, the Mary Poppins line would just be a standalone line. But his comments, along with my response is what made that line go absolutely crazy with fans. They loved it, it was a beautiful moment and the entire crew loved it – they broke up in laughter on nearly every take.

For me, acting-wise, you just play it as the character. You don’t know what’s going to happen, right?  You’re just going through your life and doing the things you need to do. I’m not thinking about that end scene where I’m doing Mary Poppins. I try to keep it as simple as I can. I don’t try to think about other things when I’m in the moment of that scene. The hard part with film work is that they film out of sequence. I wasn’t sure, even in the beginning of my career, you mentioned Henry: Portrait of a Serial Killer, I ended up doing that movie simply because I wanted to see if I could even do this film work. It seemed so strange to have to jump to do the ending before doing the beginning and all that stuff. You’re flipping and flopping all over the place, right? I wasn’t sure if I was gonna be any good at it. Or if it would be rewarding for me as an artist.

People still do remember that movie quite well and new people are seeing that movie now. I take it a moment at a time. It was a beautiful sequence, it was written quite well and it was set up geniously (sic). James Gunn makes it easy for the actors to be open and honest and real and in the moment.

Does this mean you’re going to make an appearance in the new Mary Poppins movie?

(Laughs) It doesn’t mean anything like that. Did I say something that insinuated that? No, I’m not in that movie. (Laughs)

Another beautiful thing in Guardians… was that you had the chance to work with Sylvester again. It was great to see you guys on screen again. How was it?

Going back to earlier in your career, you were in Mallrats – did it give you a sense of the size of the comic book industry you’d eventually work in?

The comic book industry is massive. The gaming industry’s massive. We’re only just now beginning to utilise the technology to bring these things to life. It’s only going to get bigger, better and sweeter. Look at what you’re seeing on the screen now. All that technology is only gonna grow and make it simpler, easier and cheaper for filmmakers to bring almost anything to life and have it look very natural and very realistic.

Are you still afraid of chocolate-covered pretzels?

From the can, not from the hand.

Totally, from the can, not from the hand, yeah.

Can you talk about the physical transformation that took you from the handsome man in front of us to the creation we see in the film?

He’s way too smart. The prototype fin was just as easy to put on as in the first film. As a matter of fact, I forgot it was on many times and I forgot to duck. I literally almost knocked myself out several times.

Did you leave a trail of blue paint all over the set?

No, the paint didn’t come off. I could sweat through it, it was breathable. They took several months to develop the paint. I had 5 or 6 layers of different shades, different colours of paint on me. They would do airbrushing it on so it was quite thin and as I said it was breathable. The first time I had it on I went out and did a jog – I went out running around up and down stairs – just to work up a sweat to see what would happen with the paint.

Did you get a lot of strange looks?

Oh yeah! But it was still top secret so I had to run around the back lot and I got a good sweat going. Technically, it was beautiful. I was sweating, the paint was not dripping. It was perfect.

As you know we did two movies, the first instalment (Guardians of the Galaxy) took about four hours. Total. A lot of prosthetics, all the painting and the wardrobe. Everything, about four hours. I was ready to go in four hours. We cut it by about forty five minutes for the second one. We cut out one of the layers of paint and replaced it with a base layer of material that helped the removal happen quicker. So the base layer, protected my skin, and it helped everything come off easier.

So we cut the time by forty five minutes to an hour and the less time you’re in the make-up chair, it gives you more time to prepare, to get ready for the scene, to get your wardrobe on, chill out a little bit. It took about an hour and a half to get off, unlike a movie I did called Slither. Which is another James Gunn movie. That was a seven and a half hour job. And it took about two and a half hours to come off.

Last question! Can I really whistle? *whistles* Thank you guys. 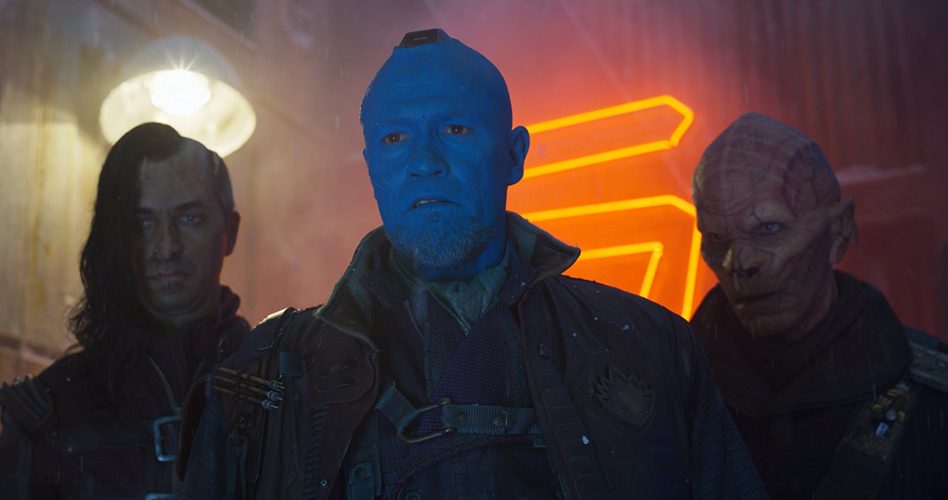