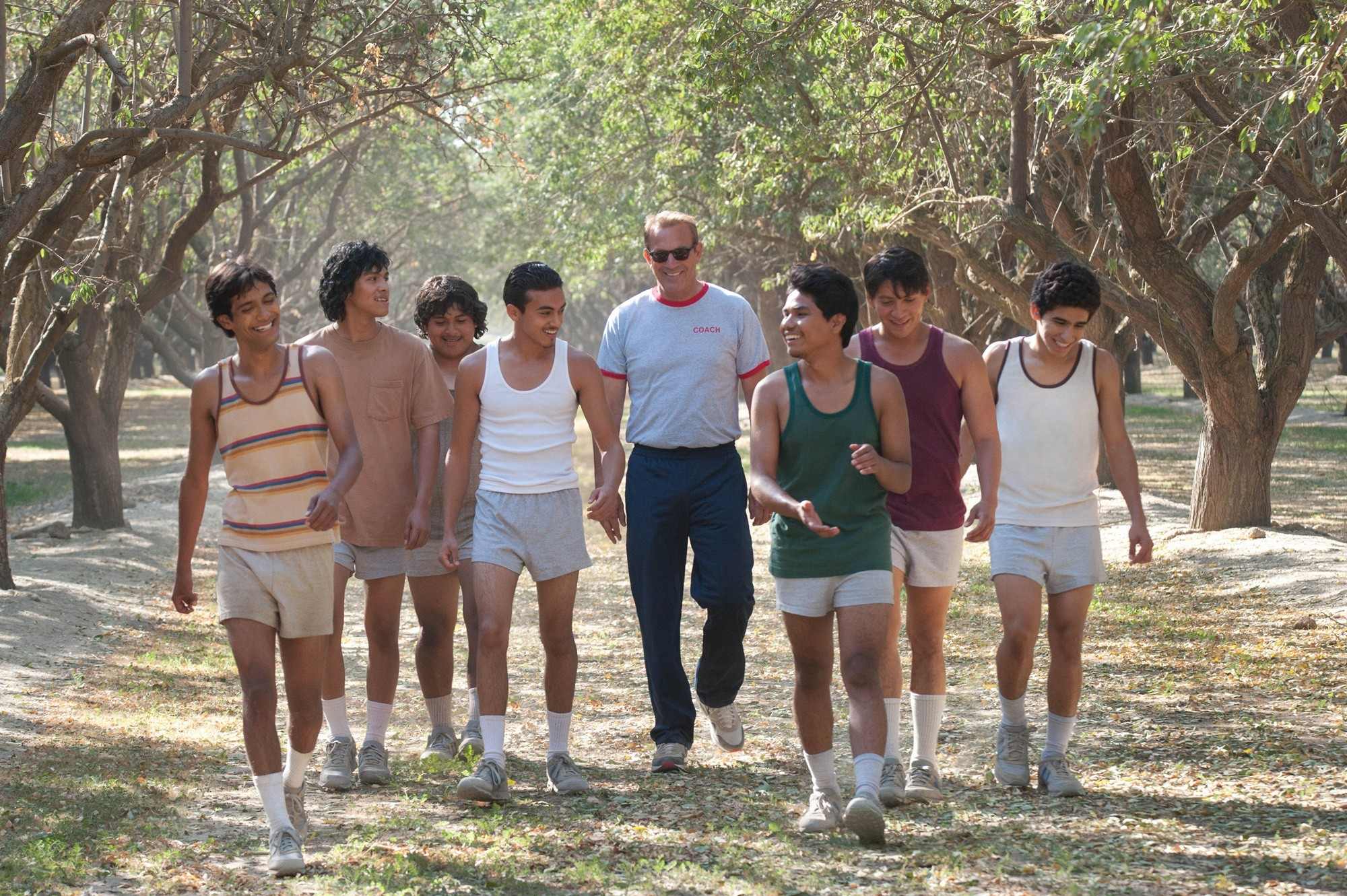 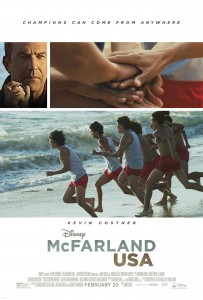 With something like McFarland, USA you know exactly what you’re getting into the moment you purchase a ticket. Still, McFarland is full of surprises and the big one here is that despite being an inspirational Disney sports movie based on a true story director Niki Caro (Whale Rider) and screenwriter Grant Thompson have garnered the genuine heart and real sense of community in this story and successfully brought it to the film adaptation. There is immediately a stronger aesthetic to the film than any of the more recent outings in this mini-genre that make the stories feel manufactured and the characters little more than archetypes. Everything from the titular location to the characters we should seemingly already know feel authentic in a way that garners an inherent respect for what is trying to be accomplished. To the point of going in and expecting one thing and getting more than you bargained for it is somewhat surprising, given his résumé, that Kevin Costner hasn’t already starred in one of these Disney sports films and kind of unbelievable this story hasn’t already been tapped for a feature film. I’m glad it hasn’t and that Costner waited patiently for, despite his clear admiration for films around America’s pastime, a film that makes good use of not only his persona, but the influencing factors of that persona. This adoration for baseball we associate with the actor allows him to fit perfectly into the mold needed for Coach Jim White. For as much as White is out of his depth in the city of McFarland we see the unease of Costner in returning to a genre that makes him feel at home. Just as Costner is trying to reinvigorate his career White is trying to figure out his life as a coach maybe not of the sport he knows best, but of the ones his particular pupils have a greater skill for. He is out of his depth, but he is willing to try and find something that reinvigorates his passion, just as the actor playing him is doing. McFarland, USA isn’t really about Coach White though, but the community at large and reinforcing Costner’s casting all the more is the fact he’s a perfect surrogate for the majority of Americans into a world we think we understand well enough, but have no honest idea of.

Set in the fall of 1987 we meet Jim White after the unfortunate circumstances of his temper leading to what no doubt becomes labels and exaggerated stories being told of his coaching style. Under these circumstances White is forced to move himself, his wife Cheryl (Maria Bello) and their two daughters, Julie (Morgan Saylor) and Jamie (Elsie Fisher), to a predominantly Latino high school in McFarland, California. It comes to light that this isn’t the first time White has encountered turmoil in one of his coaching jobs and that it is something of a pattern leading him to what feels like this last resort in McFarland. The families first night in town is shrouded in the uneasiness of not only being in a new place, but in feeling like complete outcasts giving way to a sense of worry that is, understandably, imagined because of the pre-conceived notions given to the Latin community.There are questions of safety, of if a job is worth the initial stress as even the job itself presents Coach White with a measure of struggling to find common ground with his students. For the most part, he is going through the motions; wearing his different, but equally stylish jumpsuits, making the kids run laps during P.E. and stirring up trouble on the football field in his first game. This is all, of course, until he notices a few select students with what seem to be exceptional running abilities. Specifically that of Thomas Valles (Carlos Pratts) who White clocks as he drives alongside the young man running to the fields where he works before and after school. White recruits Johnny Sameniego (Hector Duran), who was kicked off the football squad around the same time as him, to find six other runners for his team including Thomas as he takes the idea to Principal Camillo (Valente Rodriguez). From here we are introduced to Jose Cardenas (Johnny Ortiz), Victor Puentes (Sergio Avelar) and the Diaz brothers (whose mother played by Diana Maria Riva steals every scene she is in) of Danny (Ramiro Rodriguez), David (Rafael Martinez) and Damac;io (Michael Aguero) who form the first McFarland cross-country team allowing the audience into a whole new world of family and communal dynamics that have almost nothing to do with running.

The last sentence of the previous paragraph hits on the biggest strength of the film in that one could easily predict where this kind of movie is going and what points and emotional beats it will hit along the way, but despite that knowledge it’s hard to help not being pulled into this world that our surrogate is slowly becoming accustomed to as well. As we learn more about McFarland and the families that live there we see that these kids have little beyond the food and shelter necessary to keep surviving. That’s all they’re really doing- surviving. School is little more than a required distraction. No one ever needed a book to work the fields. The fields are where their future is and if it’s not there then it rests in the prison situated conveniently next door to the school. Upon moving into town White sees all these obvious markers of failure and seemingly finds no spirit or motivation for him to latch onto. This is somewhat aggravated by the constant reminding of fellow teacher Ms. Marisol (Vanessa Martinez) that it is their job to create the hope and motivation in their students, but Costner’s White seems to see little reason to get their hopes up when their future is so clearly painted in front of them. It is coming to the realization that these high school years are likely the best years these kids will ever get to live and the best chance they have for making something of themselves if they so choose and deep-down White knows he has to acknowledge that even if he himself is at the end of his own rope. A funny thing happens when you raise a kids hope though in that it also raises their spirit and it is through the progression of getting his teams hopes up that the spirit of both them and the community at large rises to a palpable sense that before had barely been scraping by. It is funny in that the nature of how these kids were raised, without the privilege you and I take for granted, nurtured them to have the work ethic and natural skill necessary to compete in as mentally challenging a sport as a physical one. It is in this sport that the movie and the community find an anchor for which the repercussions bring that spirit and hope to levels that really do make you want to stand up and cheer.

Clearly, there is much to appreciate about McFarland, USA for as much as you know what to expect it equalizes those expectations with nice surprises and an unexpected balance of focus on the family dynamics of our lead character and those of his teams while allowing the structure of the sports competition to serve as the pacing device that gets the film from one act to the next. Sure, we are excited to see Thomas excel more and more with each meet and even more to see Danny motivate himself to greater levels than he ever thought possible as well as Victor finding an outlet for his attitude and Johnny finding a place to fit in, but even more touching is the journey of these kids in between the meets. These are the moments where they make strides to understand why Coach White is pushing them and what he is trying to help them accomplish while they school their Coach on a few things along the way as well. These scenes are the heart of the film because we come to realize the reason White had such a spotty résumé to that point. He was always pushing the soft kids, trying to toughen them up in a way the kids in McFarland already were. He continued to move, he continued to be shifted out of positions because he never really found a challenge that sparked a real spirit in him or his cushioned and comfortable players. In McFarland though, he was brought the challenge of not only creating a successful team from nothing, but individual kids each with their own stories and obstacles greater than anything White had ever encountered. White was out to make kids tough enough to excel at their chosen elective while the kids in McFarland were tougher than he was. This forced White to look at himself, to put the challenge on himself of rising to their occasion rather than them rising to his. The film never dips into the politics of the sport at hand and no unnecessary drama is elicited from it, but instead the film keeps a very clear throughline of the values this community lives by in yearning to make their children proud and teaching White the difference in where you think you want to be and where you know you should be.