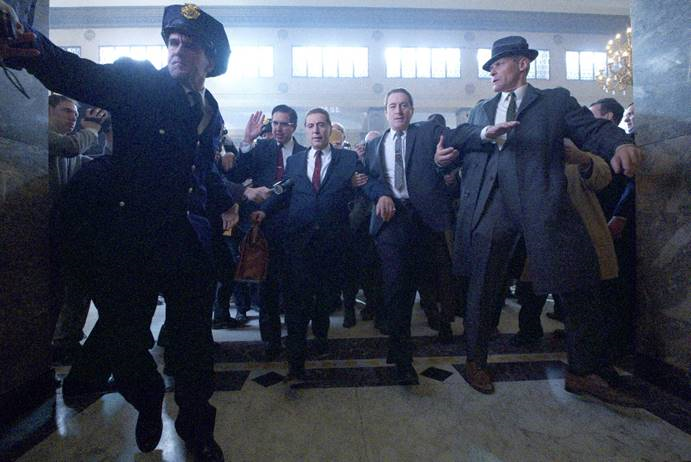 The 63rd BFI London Film Festival today announced that The Irishman will be this year’s Closing Night Gala,

Directed by one of the true giants of cinema in Martin Scorsese, the film stars Academy Award winners Robert De Niro, Al Pacino and Joe Pesci.

The film will have its International Premiere on Sunday 13th October in London, with Martin Scorsese and cast expected to attend.

The BFI London Film Festival is also pleased to announce that there will be simultaneous preview screenings of The Irishman taking place at cinemas across the UK.

Reuniting Scorsese with his Gangs of New York screenwriter Steve Zaillian, who adapts from Charles Brandt’s novel I Heard You Paint Houses, The Irishman is a grand scale epic examining the influence of organised crime in post-war America. Told through the eyes of World War II veteran Frank Sheeran (De Niro), a hustler and hitman who worked alongside some of the most notorious figures of the 20th Century. Spanning decades, the film chronicles one of the greatest unsolved mysteries in American history, the disappearance of legendary Union President Jimmy Hoffa and offers a monumental journey through the hidden corridors of organised crime: its inner workings, rivalries and connections to mainstream politics.

Martin Scorsese, director commented “I’m extremely honored to be having the International Premiere of The Irishman at the closing night of the BFI London Film Festival. This picture was many years in the making. It’s a project that Robert De Niro and I started talking about a long time ago, and we wanted to make it the way it needed to be made. It’s also a picture that all of us could only have made at this point in our lives. We’re all very excited to be bringing The Irishman to London.”

Tricia Tuttle, BFI London Film Festival Director said “What an immense cinephile thrill it is to close the 63rd BFI London Film Festival with the International Premiere of Martin Scorsese’s The Irishman. British Film Institute Fellow Scorsese is one of the true greats of cinema – as both a creator and a tireless champion of preservation and film history – and here he and his creative team have delivered an epic of breathtakingly audacious scale and complexity, exploring relationships of trust and betrayal, regret and remorselessness, which dominated a period of American history. This is a major occasion for film lovers and I cannot wait to share this film with UK audiences.”

Hollywood’s Portrayal on the Different Kinds of Love