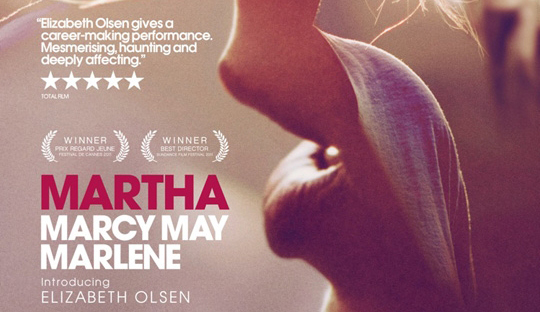 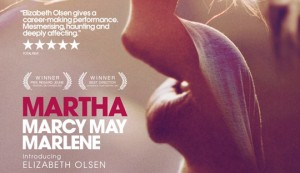 Martha Marcy May Marlene is the fall’s second instalment of films out to prove psychological dramas can still surprise and delight, trailing the near-masterpiece Take Shelter. Though the thematic parallel between the two films is easy to establish – they both deal with a human mind losing sight of reality – their approaches are radically different. So different, in fact, that their strengths and weaknesses are almost exactly complementary.

Almost, for they both rely on outstanding lead performances. First-time performer Elizabeth Olsen was evidently Durkin’s muse in the creation of MMMM, the main reason for making the film. It wholly revolves around her, shamelessly showing her off while careful never to reveal too much about neither her nor her character. Handled with such care, she more than shines with an intriguing, memorably on-key performance, one of the great debuts in recent memory. It should prove interesting to see if she can retain that spark in movies she doesn’t command so.

Her Martha is a runaway beauty in her early twenties moving back in with her sister and her brother-in-law after spending two years in a cult. Exactly what the cult does is never told except that it rejects all social norms, replacing them with others which her mental degradation hints are as or more harmful. Martha (nicknamed Marcy May in the cult), despite patient help from her sister, is unable to readapt herself to the life she once knew, instead becoming increasingly paranoiac after escaping the cult.

The film is a stylistic wonder, toying with flashbacks, with lighting and colour, with rhythm, with a slightly suffocating atmosphere (think rain forest humidity) to intrigue the viewer, lead him left, guide him right, tease and never truly satisfy him. It triggers a very particular type of unease, achieving this way impressive distinctiveness. It gradually suggests a comparison between the mysterious cult, which our imagination is left to colour, and the widely-accepted working man’s life of possession-accumulation and charming lakeside houses. Better yet, it suggests this comparison without ever passing judgment, for it is brought on by an erratic child never earning much credibility. The movie is content laying out its ideas and destabilizing the viewer.

And, though this approach is undeniably interesting, it seems afraid to do more, afraid to lose its oddness. Yet it remains a film, and every film should answer the eternal “why do we care?” By evolving in so much blur and so much grey, MMMM only outlines its answer, leaving too much of it up to its viewers. Martha doesn’t intrigue nearly as much as Elizabeth; she is shown bruised but never wanting to get back on her feet, never wanting anything at all. As her brother-in-law once points out, she has no values of her own. This incompleteness of her character, added to the unknown nature of her past, intrigues some, sure, but mostly makes it tricky identifying with her struggles. And where other atmosphere flicks such as Lost in Translationsucceed admirably, MMMM, its plot and its character make very little progression from start to finish. Though not quite stagnant, it ends up a victim of its own overriding desire to disrupt.

Yet I am compelled to defend it, for there is much to like. For Olsen alone it would have been worth the watch; luckily it goes well beyond that on many levels. There is no doubt it’s something special, it’s just not clear what.