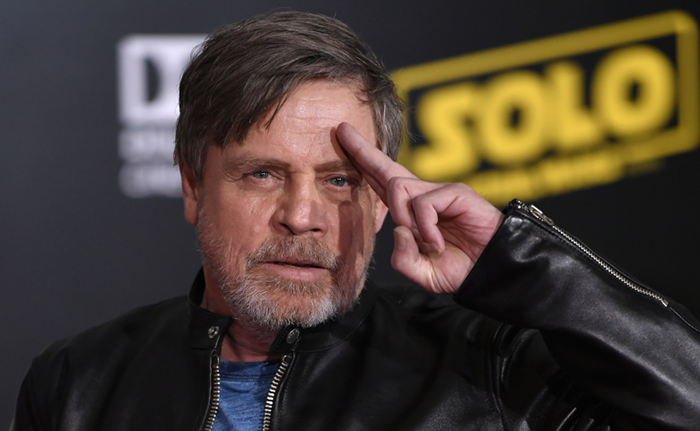 Mark Hamill has had a long, storied, and incredibly varied career as one of the finest actors of his generation; from menacing the caped crusader as the clown prince of crime on the iconic Batman: The Animated Series, to reprising his role as the mischievous Trickster on CW’s The Flash, to portraying Professor Arnold in Kingsman: The Secret Service, or fighting alongside the Knights Templar during the 14th Century in the forthcoming second season of Knightfall. But there is one role, and one role alone, which will forever define the thespian – that of the Jedi, Luke Skywalker.

Hamill portrayed Luke throughout the original trilogy of Star Wars films that spanned from 1977 to 1983, and delighted fans when he reprised his role for a brief cameo in JJ Abrams’ Star Wars: The Force Awakens (2015). But it was during the filming and press for director Rian Johnson’s 2017 instalment The Last Jedi in which he caused some controversy.

“The thing is, Luke changed so much between the first trilogy and the last trilogy. I got myself into trouble,” Hamill explained, during an interview with Den of Geek, “I made a vow – I said that I’m not going to talk about the movies anymore, because I think it’s important for the audience to see them. My problem was, I wasn’t dealing with social media back [when my career began], where you say something and it goes around the world in 24 hours! If I were to answer your questions on paper, I’d think: oh, that sounds a little strong, or, I shouldn’t say this. But I have a tendency just to talk and talk and talk, and you can cherrypick. You know, I’ll be reading something, and say, ‘What moron said this?’, and then realise, ‘Oh, it’s me.’ They can take selective comments you’ve made out of context and use it to support their argument: ‘See, Mark hated Star Wars!’ – ‘Did I?'”

Star Wars fans have been embroiled in passionate, often vitriolic, debate since the release of The Last Jedi, arguing over the treatment of Luke, finer plot details, the Canto Bight sub-plot, and a great many other flaws and positives that make the feature one of the most divisive in recent memory. Mark Hamill himself acknowledges the fans’ devotion to the franchise which launched his career, and even admits he understands it more than he may let on:

“I was once describing Star Wars fans, and I said they’re passionate, they’re opinionated, and they feel a sense of ownership, because they’ve invested so much time in these characters and these stories… and I realised I was describing myself. It can get you into trouble, because I don’t control the storylines. I’m sort of like a musician. I read the music, and I try to play it to the best of my ability.”

Hamill has since called The Last Jedi “an all-time great movie”, but that hasn’t stopped a vocal minority holding up his pre-release comments as something of a blunt instrument to batter the believers with. However, it’s clear that none of that fiery, clashing division is in the spirit of the actor himself, who smirks and laughs his way through interviews with a mischievous glint in his eye. Indeed, even with Disney higher-ups he can be something of a trickster: “I say to the executives at Disney, ‘Really? [Solo: A Star Wars Story] five months after our movie? Give it a rest!’ They say, well, we have to keep the schedule clear for Mary Poppins [Returns].”

He feigns outrage, and then smiles in response: “I can be mouthy, because you know, what are they gonna do – fire me?”